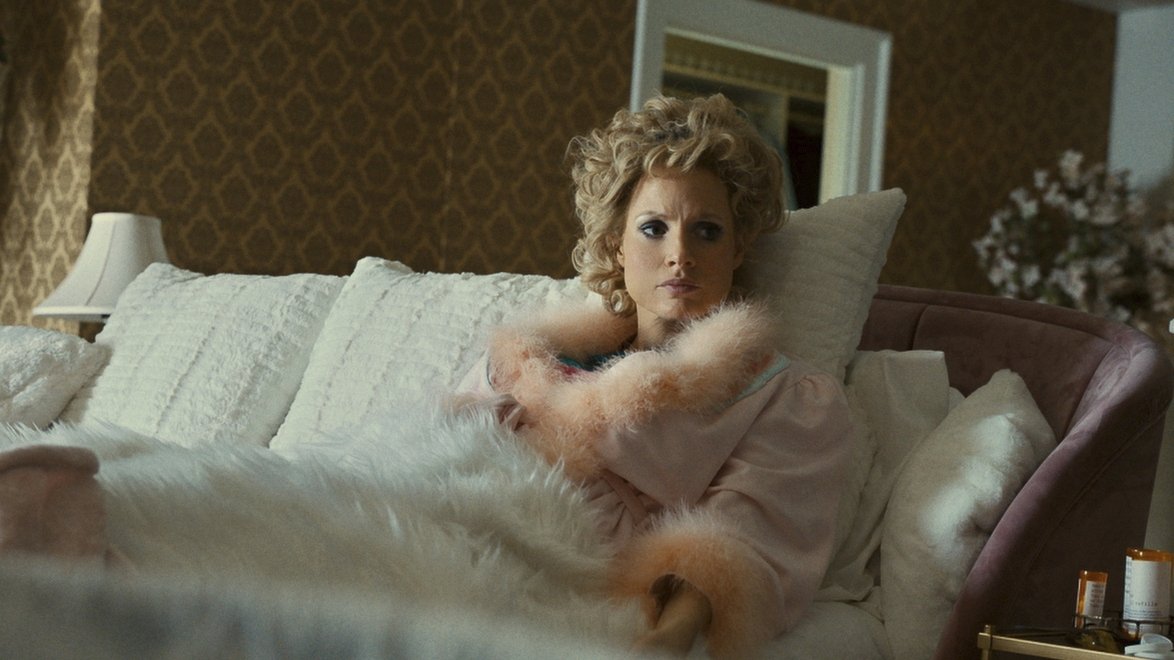 This image released by Searchlight Pictures shows Jessica Chastain as Tammy Faye Bakker in a scene from "The Eyes of Tammy Faye." (AP Photo)
by ASSOCIATED PRESS Sep 09, 2021 12:58 pm
RECOMMENDED

The star-studded Venice and Cannes Film Festivals are considered the most prestigious film festivals around the world with all their glory. But what makes the Toronto International Film Festival (TIFF) different from such glamorous events is its audiences. TIFF is one of the largest publicly attended film festivals in the world.

But because of TIFF’s reliance on crowds, this year’s festival has been somewhat hampered. A year after turning to largely virtual screenings and drive-ins, Toronto's festival began more fully in-person today with the premiere of the Broadway musical adaptation “Dear Evan Hansen.” A full revival isn't there, yet. Downtown Toronto streets aren’t closed off as usual, some venues aren’t open, theater seating is social distanced and the festival has brought back the virtual platform.

TIFF is back. But not all the way.

“We got through a hard time in the winter when we weren’t really sure what kind of festival we’d be able to put on,” says Cameron Bailey, the festival's artistic director and co-head. “It’s just great that we know we can do it. We’re back in Roy Thompson Hall and the Princess of Wales. We have drive-ins and we have an online platform. We were able to deliver the festival in every which way.”

Cannes, Venice, Telluride and the upcoming New York Film Festival have gone forward this year with entirely in-person festivals, but Toronto is straddling normal and virtual – and keeping some of its pandemic innovations. That’s partly due to circumstances.

Toronto endured one of the longest lockdowns over the past year. Indoor dining didn’t resume until July in Ontario. Only last month did Canada reopen its border with the United States to non-essential travel. It was in those conditions that Bailey and fellow co-head Joana Vincente were preparing the TIFF's 46th edition.

“We got really comfortable with scenario planning,” Bailey says. “That’s what this year has been entirely about. There was never going to be one festival that we planned for. We had to plan for a bunch of different possibilities and, as things change, adapt and adjust.”

The festival this year has been downsized – about 100 films will play, almost twice the number of 2020 but roughly half of a typical year. Some of the fall's top premieres – among them “Dune,” “The Power of the Dog," “Spencer" and “The Last Duel" – opted instead to first unspool at Venice (though each will screen in Toronto, too).

Some of the most anticipated TIFF debuts include Michael Showalter's “The Eyes of Tammy Faye," starring Jessica Chastain and Andrew Garfield as the televangelists Tammy Faye and Jim Bakker; Stephen Karam's adaptation of his Tony-winning play, “The Humans”; Antoine Fuqua's Los Angeles crime thriller “The Guilty,” with Jake Gyllenhaal; and “Dear Evan Hansen,” Stephen Chbosky's musical with Ben Platt reprising his Broadway role as an anxiety-ridden, depressed teen whose encounter with another high schooler who kills himself thrusts Evan into an awkward spotlight.

Chbosky premiered his 2012 breakthrough “The Perks of Being a Wallflower” at TIFF. This time, a different festival experience awaits.

“The one thing I’ve learned in the last year and a half is to rid myself of expectations. Nobody knows what anything is from one day to the next. So I just am grateful we were invited and I’m honored we were invited to open the festival,” says Chbosky. “At this point, it feels like it’s all icing.”

The documentary program is one area that's as strong as ever. Among the films playing over the coming days: “The Rescue," about the 2018 Thailand cave rescue, by “Free Solo” filmmakers Elizabeth Chai Vasarhelyi and Jimmy Chin; Alison Klayman's Alanis Morissette documentary “Jagged"; the Dionne Warwick bio-doc “Dionne Warwick: Don’t Make Me Over"; “Julia,” a profile of culinary trailblazer Julia Child by “RBG” filmmakers Julie Cohen, Betsy West; and Stanley Nelson's “Attica,” about the 1971 prison riot.

Liz Garbus ("What Happened, Miss Simone?") will screen “Becoming Cousteau,” her portrait of the pioneering oceanographer Jacques Cousteau – a film made amid the currents of today's environmental concerns. Like many, Garbus grants that just a few months ago, she expected a very different COVID-19 landscape than the surge brought on by the delta variant. But the festival experience, done responsibly, is worth it to her.

“Even though we have some safety measures and maybe the festivals are a little quieter than they would be, there’s nothing like showing a film to an audience," says Garbus. “We’ve all missed that and I think people are really hungry for it.”

Those measures at TIFF include everyone entering an indoor venue – stars, audience members and staff – providing proof of vaccination against COVID-19 or a negative test within 48 hours beforehand. Ticketing will be digital. Red carpets will be skeletal.

Some of the highest profile films playing at TIFF will only be screening in-person. (Among those are a not-yet-revealed Steven Soderbergh film and Kenneth Branagh's semi-autobiographical “Belfast" and Barry Levinson's up-for-sale “The Survivor,” with Ben Foster.) Some digital screenings will be available across Canada. Satellite in-person screening will also be held coast-to-coast. TIFF's footprint is both smaller and larger than before.

TIFF, like other festivals, continues to balance its desire for equitable access with its core appeal to filmmakers and studios: causing cultural sensations inside movie theaters.

“We want to make sure that even when the pandemic is behind us that we’re as accessible as possible. If there’s a way to deliver at least parts of the festival online, then we want to do that,” says Bailey. “The mission stays the same. We’re still here to provide that experience of film that’s going to transform people. That doesn’t change. But the way we deliver it can change, and has changed for sure."