In and out of time: Istanbul as curated by Murat Germen 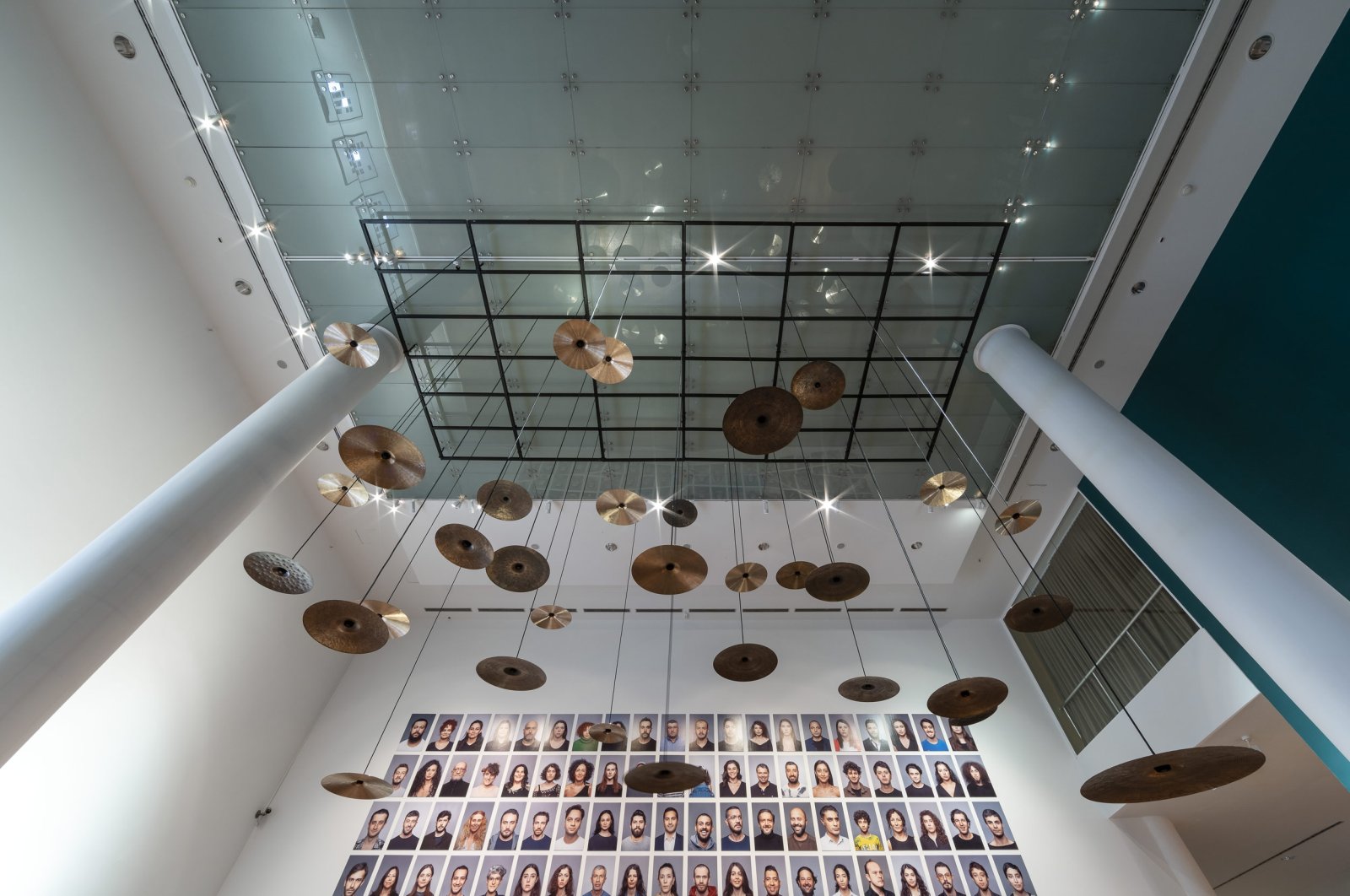 An exhibition at Sakıp Sabancı Museum, titled 'Past Present Istanbul,' began with a call by artist and professor Murat Germen, who invited 22 artists to respond to the way that Istanbul has changed over time

Leading into one of the lower exhibition halls within the elegant ambiance of Istanbul’s Sakıp Sabancı Museum is a series of photographs by Murat Germen. The color scheme of the installation begins with crystal clear, full-color panoramas of the Thracian valleys and Anatolian hills linked by wide suspension bridges over the Bosporus. The images maintain a peculiar focus on the shapeshifting earth below. They then come to include grayscale works, almost sepia-toned, interiors of condemned, ruined and abandoned buildings that might have once housed the industrious kitchens and workshops of the city’s illustrious heritage.

Not only is the contrast stark, but it seems to merge. As if, by a succession of stills, Germen succeeded in capturing a sense of the overwhelming momentum of territorial change that enshrouds and eventually swallows the unseen spaces amid the runaway urbanization that has come to define life in the largest Turkish metropolis. The sleek photographic aesthetic of ultramodern roadways encircling marinas along the Sea of Marmara, or of a highway passing through the shadow of towering, half-constructed high-rise complexes is then juxtaposed with silvery spectacles of aged storefronts and apartments with their iconic medieval bay windows.

As the Izmir-born ancient philosopher Heraclitus famously chimed, “No man ever steps in the same river twice,” and so, his disciple, an Athenian who crossed the Aegean Sea to learn from him, rebutted that no one can ever even step into the same river once. When applied to the passage of time and the idea that is Istanbul, a geography, a community, a body politic, Asia Minor’s wizened philosophical fragments come to enjoy a revival of meaning. It is in that spirit that Germen curated “Past Present Istanbul,” assembling multidisciplinary works by artist alumni from Sakıp Sabancı University’s Visual Arts and Visual Communication Design program.

Despite the relatively dull, generalized title, which might be seen in a nondescript municipal exhibition on the outskirts of Fatih, Germen proved to bring together a vital and radical group whose artwork coalesces broadly and diversely within the social networks of Istanbul’s young culture scene. Such large-scale works as “Istanbul: A Familiar Crowd” by Korhan Karaoysal are fit for the sizable museum show, and gleam with the faces of people who seem to have graced the overlapping sectors of media and art. Adorned in casual attire, and with flat expressions, cafe society looks back at its keen onlookers, equally curious.

Within a way out

One of the more impressively unique, and visually stunning installations at Germen’s “Past Present Istanbul” was a historically innovative piece by Ege Kanar, entitled, “Vessel,” exploring the Armenian-led craft of cymbal-making. Kanar researched back to the Bronze Age, and mined the Ottoman archives for evidence of the migrant Zildjian family and the traces of their early work as it exists between Turkey and America. The vibrating soundscape of these masterworks of metal manufacture hang from the ceiling of Sakıp Sabancı Museum and echo with the haunting story of their resonance.

The well-curated surrounding “Vessel” is a photo series opposite that of Karaoysal’s piece by the imagistic artist and photobook publisher Cemre Yeşil Gönenli, whose subjects are purposefully cropped, headless and bound by the hands. In place of their heads are lamps that evoke the cityscape during the reign of Sultan Abdülhamid II. They are selections from her book, “Dream & Fact: A Handbook of Forgiveness and A Handbook of Punishment” (2020). Comparatively, with Kanar, Gönenli dove headlong into Ottoman history, excavating the albums of Sultan Abdülhamid II, whose love for photography was only matched by his enthusiasm for English detective novels.

It is rumored that Sultan Abdülhamid II was burying his nose in a Sherlock Holmes tale while revolutionaries were banging on his door at Yıldız Palace, an apt metaphor for the twilight of the Ottomans. Gönenli, in turn, has blown the dust off of archival photographs taken during his rule. A kind of metaphysical waywardness runs through Germen’s curation, a sort of sideways inkling that Istanbul may not be on course as the Westernizing world again shifts out of control as it had especially during the first half of the 20th century, as, arguably, always.

A deceptively simple duo of paintings by Ahu Akgün expresses as much, in reference to what might have been, to some, an utterly predictable event, and to others a total surprise, namely the Vitaspirit accident of April 7, 2018, when a 225-meter-long (738-foot-long) carrier ship drifted off course on the Bosporus and crashed into the Hekimbaşı Salih Efendi Mansion. Akgün painted the bow of the ship as it would have been seen from the mansion itself, an imposing, approaching mass. In turn, the mansion is a vulnerable structure of hollow sticks, although architecturally exquisite, it is, as Istanbul’s past, delicately up against unstoppable industry.

To be in the moment

Within the transforming landscape of Istanbul’s infrastructure are ever-looming shadows of impending construction, a ubiquitous feeling shared by all, even if unspoken, that the ideals of modernity, its conveniences and glamor, await, just around the corner, practically messianic in its omnipresent import. Using wall plaster with uncoated poster paper in the manner of a photographic collage, Örsan Karakuş focused on Haydarpaşa Railway Station, placing archival images of the transportation’s center’s history alongside that of contemporary snapshots, representing the famed nexus that once served Parisian travelers on the Orient Express.

Among the renovations at Haydarpaşa there is rumored to be a climate change center, merging cultural work with ecological activism, much in the spirit that the newly opened Gazhane Museum is demonstrating for its well-educated and internationalist millennial crowds. The work of Karakuş is quite akin to the aesthetic formulae of Germen’s installation, and it might branch out in relation to a sculptural collage by Nora Byrne, whose piece, “Now you can cross without touching” is an assemblage of Istanbul’s spectacular bridges made of cardboard and found objects.

“Past Present Istanbul” is curated with a careful sensitivity to the spatial interrelation between mediums, where photographic works align and commingle with aural atmospheres, and where sculptural pieces meld into video-based installations. While there are dark, apocalyptic sensibilities in Begüm Yamanlar’s archival pigment prints, “When the Bosphorus Dries Up,” they are presented in proximity to a post-Anthropocene environmental revitalization in the work of Deniz Ezgi Sürek. In the form of a digital print, and wallpaper, Sürek’s piece, “Memento Mori” is a solemn reminder to Istanbul’s untold city-dwellers that time will fly even in the face of reality’s truths, hard as concrete, but no less subject to elementary change.