Historical Bulgur Palace to serve as cultural center in Istanbul 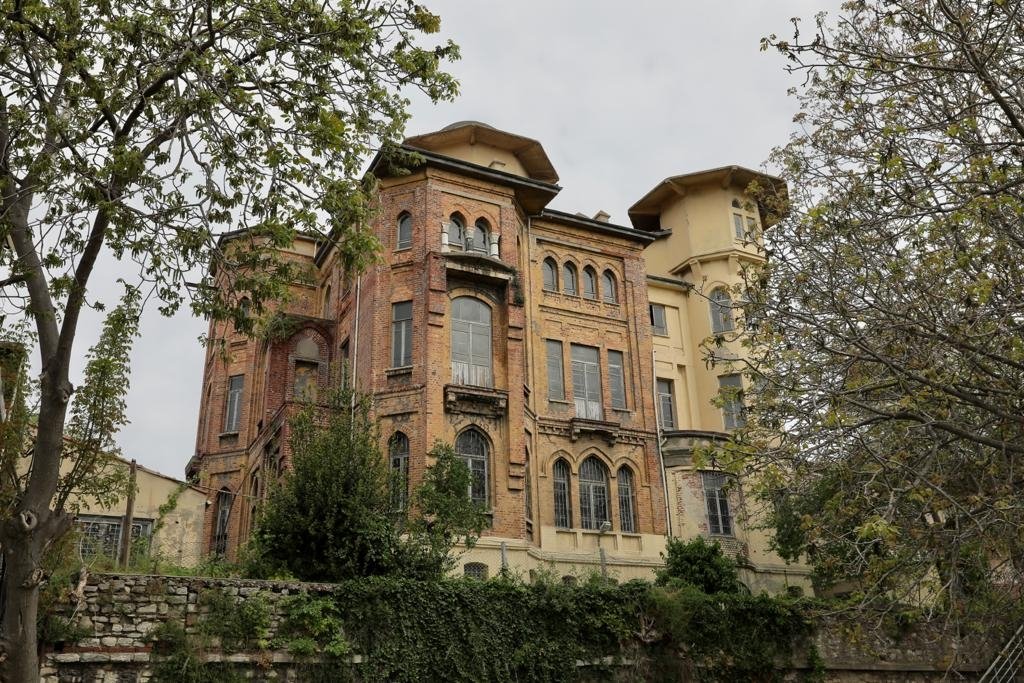 An old, abandoned building that resembles a majestic chateau from the outside was left to its fate a long time ago on Istanbul's historical peninsula. Situated along the Marmara Sea coast, it remained idle for many years with visitors unable to look around its interior or enjoy the views of Istanbul from its windows. This building was none other than the Bolulu Habib Bey Mansion, also known as the Bulgur Palace. However, Istanbul Metropolitan Municipality (IBB) recently bought the mansion and soon this building of exceptional architecture and mystic atmosphere will serve as a cultural center to Istanbulites after the appropriate restoration works.

Istanbul was founded on seven hills that have been the heart of the city since the Byzantine Empire. The Bolulu Habib Bey Mansion is located on Kocamustafapaşa Hill, which starts in the Aksaray area and rises up between the Cerrahpaşa and Samatya neighborhoods. The story of the mansion is as intriguing as its imposing exterior. Let’s explore some details about the mansion, from its foundation to its abandonment.

The Bolulu Habib Bey Mansion was commissioned to the Italian architect Guilio Mongeri in 1912 by Mehmet Habib Bey, who was the Bolu deputy of the Committee of Union and Progress (CUP). Mehmet Habib Bey was born in northern Turkey’s Bolu in 1878. After finishing the military academy, he started to work as an artillery officer in the Ottoman army and was appointed to Macedonia’s Bitola between 1905 and 1907.

At the suggestion of Enver Pasha, Mehmet Habib Bey joined the CUP as an active member after taking a secret oath in Thessaloniki. Then, he was assigned the task of establishing new branches of the CUP in Anatolia. After the proclamation of the Second Constitutional Monarchy in 1908, Mehmet Habib Bey was chosen as the Bolu deputy. The period between 1908 and 1913 was a turbulent time of government change. During this challenging time, Habib Bey spent some time under arrest, where he would met Ismail Hakkı Pasha, who was the quartermaster-general-to-be during World War I (1914-1918).

With the start of World War I, the CUP focused on creating a "national bourgeoisie." The Ottoman bourgeoisie was comprised of merchant non-Muslims, which caused difficulties in meeting the needs of the army during wars. Therefore, the CUP established joint-stock companies in the country, such as national crop collectives and bakeries, with the aim of meeting the needs of the army through national bodies. The national crop collectives bought products such as wheat, barley and bulgur from Anatolia to Istanbul and then to the war fronts. Habib Bey, together with quartermaster-general Ismail Hakkı Pasha, was one of the pioneers of these national capital initiatives and started to trade bulgur.

Rumor has it that Habib Bey and Ismail Hakkı Pasha got rich by selling bulgur on the black market. This is why Habib Bey started to be called the "King of Bulgur." While Habib Bey was trading bulgur, the foundations of the Bolulu Habib Bey Mansion in Cerrahpaşa on the seventh hill of Istanbul were laid. The building was constructed with the income that Habib Bey earned from the bulgur trade, which led the building to be named the Bulgur Palace.

Despite all the complaints about them, Habib Bey and Ismail Hakkı Pasha continued their duty with the support of Enver Pasha. The Ottomans lost the war and poverty prevailed in its aftermath but construction of the Bulgur Palace continued at full speed, with Habib Bey importing all the materials used in the building’s construction from abroad. At a time when the national struggle occupied the country’s agenda, Habib Bey’s project was met by backlash.

Habib Bey was exiled in 1920 to Malta by the Damat Ferit government of the occupation years after World War I. After being tried in Malta, he returned to Istanbul but no longer had the same privileges and support he was accustomed to. The ex-deputy was soon arrested again in Istanbul and his family had to borrow a lot from banks during this period. In such conditions, the building of the Bulgur Palace could not be completed either.

In 2001, the Ottoman Bank became part of the Garanti Bank, and the Bulgur Palace passed into its ownership. After Garanti Bank put the building on the market in recent months, the IBB bought it and plans to start restoration work on the desolate building soon. After the restoration work, the mansion will serve as an information-document center, archive, library, exhibition hall and cafe. With its expansive history, architectural grandeur and views of the hills of Istanbul, the Bulgur Palace is bound to become a popular location once ready for the public.