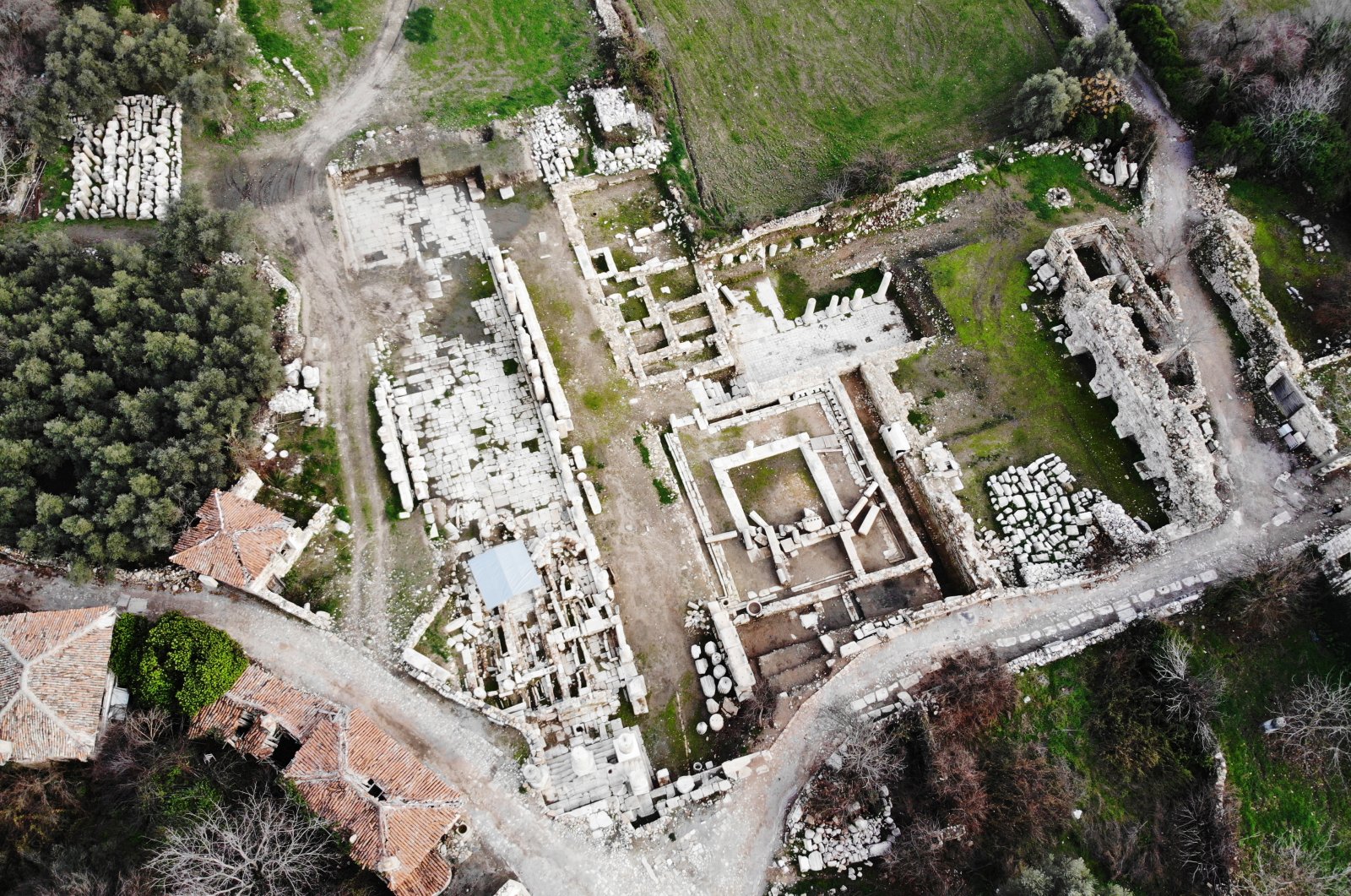 Archaeologists have been working on the colorful marble floor plates of the 1,550-year-old Byzantine church in the ancient city of Stratonikeia to restore them to their spellbinding, former condition

The ancient city of Stratonikeia, known as the city of gladiators, located in modern-day Muğla of southwestern Turkey, has witnessed many extensive archaeological excavations and restorative efforts to date. The latest project on a 1,550-year-old Byzantine church and its marble floors stands out as one of the most eye-catching restoration projects in the ancient city recently.

The Byzantine church at the ancient site, which is on the UNESCO Tentative World Heritage List, historically used to serve religious people with an enchantingly colorful marble floor. The excavation and restoration project at the site will restore the marble structure back to its original, glorious state.

Professor Bilal Söğüt from Pamukkale University, head of excavations at Stratonikeia and Lagina sites, said that most of their archaeological work was focused on Western Street, where the church is also located. Söğüt said the church was built after an earthquake hit the city in 365 A.D. and stood until the seventh century.

“The region of the church, built on the colonnaded street, was turned into a graveyard in the later period. Today, we are unearthing both the graveyard and the church. Currently, we are working on restoring the church's flooring,” Söğüt told Anadolu Agency (AA).

Söğüt stated that Stratonikeia was one of the largest marble ancient cities in the world and was home to many civilizations during its history, which helped retain its importance in Hellenistic, Roman, Ottoman and Republic periods.

He explained that materials retrieved from the excavation site, which were ruined during the Byzantine era when the church was turned into a graveyard, are carefully reconstructed staying true to their original state and are repaired in a place that could be described as a “stone hospital," and then they are meticulously placed on the floor of the church.

Söğüt pointed out that given the church's age, it had traces from many eras. “So, here we display the base and flooring of the Byzantine church but also samples of the Byzantine graves which were built on top of the church as well,” he said.

The professor said that the marble plates of the church floor had unique geometric patterns and they are collected by the archaeological team to restore. “The floor of the church is made of colorful marbles. This is the first time we have seen such a work in the city. We reconstruct and refloor the church floor with marbles that we unearth during our excavations and give visitors a chance to see the ancient times." Noting that they have so far discovered 62 graves at the church site, he added that they will display the most preserved of these alongside the church's architecture.

Söğüt stated that the structures that the archaeological team discovered were also being worked on by an illustration team to transfer the ancient works into a digital 3D space. He said that these 3D drawings would be made available for viewing to visitors in the workshop area of the site.

Stratonikeia was an ancient city built upon the remains of a Carian settlement, known as Idrias, which is thought to be the first settlement to be funded by the Lycians, another ancient Anatolian civilization.

According to Strabo, a Greek philosopher and historian, the ancient city was founded in the Seleucid Empire during the reign of King Antiochus I Soter (281–261 B.C.), who named it after his wife, Stratonice, although that is contested amongst historians. Selecuid Empire was a Hellenistic state in western Anatolia which existed between 312 BC to 63 B.C. Stratonikeia was founded as a confederation of several settlements surrounding the Carian settlement of Idrias with Anatolian and Macedonian settlers.

Although Stratonikeia’s later fell into ruin, its existence was never a secret. Richard Pococke, an English churchman and travel writer, even published a book called “A Description of the East, and Some Other Countries,” in which he described in great detail the city’s theater, bouleuterion (council house) and one of the city gates.

The city’s many historical remains include a gymnasium, a training facility for competitors in public games, which was built in second century B.C. and is the largest known gymnasium from the ancient period, a bouleuterion, which is located at the center of the city, and a theater, built on a natural slope in the southern part of the city. The Greco-Roman type theater, dated to the Hellenistic period, hosted approximately 12,000 people in its prime.

There is also the Augustus-Imperial Temple, which is situated on an upper terrace south of the theater and seems to be designed together with the theater. The temple, designed as a peripteros, a type of ancient Greek or Roman temple surrounded by columns, is thought to be from the Early Imperial Period. The city also houses a Roman bath, dating back to the second century A.D., which is one of the three baths in Stratonikeia that are indicated in inscriptions.

The northern City Gate acts as an important entrance but at the same time as a ritualistic place because it allows the sacred road of Lagina Hecate to enter the city. The gate has a monumental arched entrance on both sides, and there is also a monumental fountain in between the entrances, with semicircular pools decorated with columns and statues in Corinthian order.

Besides, rock carvings of mythological masks shine out among the significant archaeological findings of the city. These masks depict the characters in the plays performed at the theater, ancient gods and goddesses, as well as animal figures.