Artist explores ‘The Four Elements’ through art of illumination 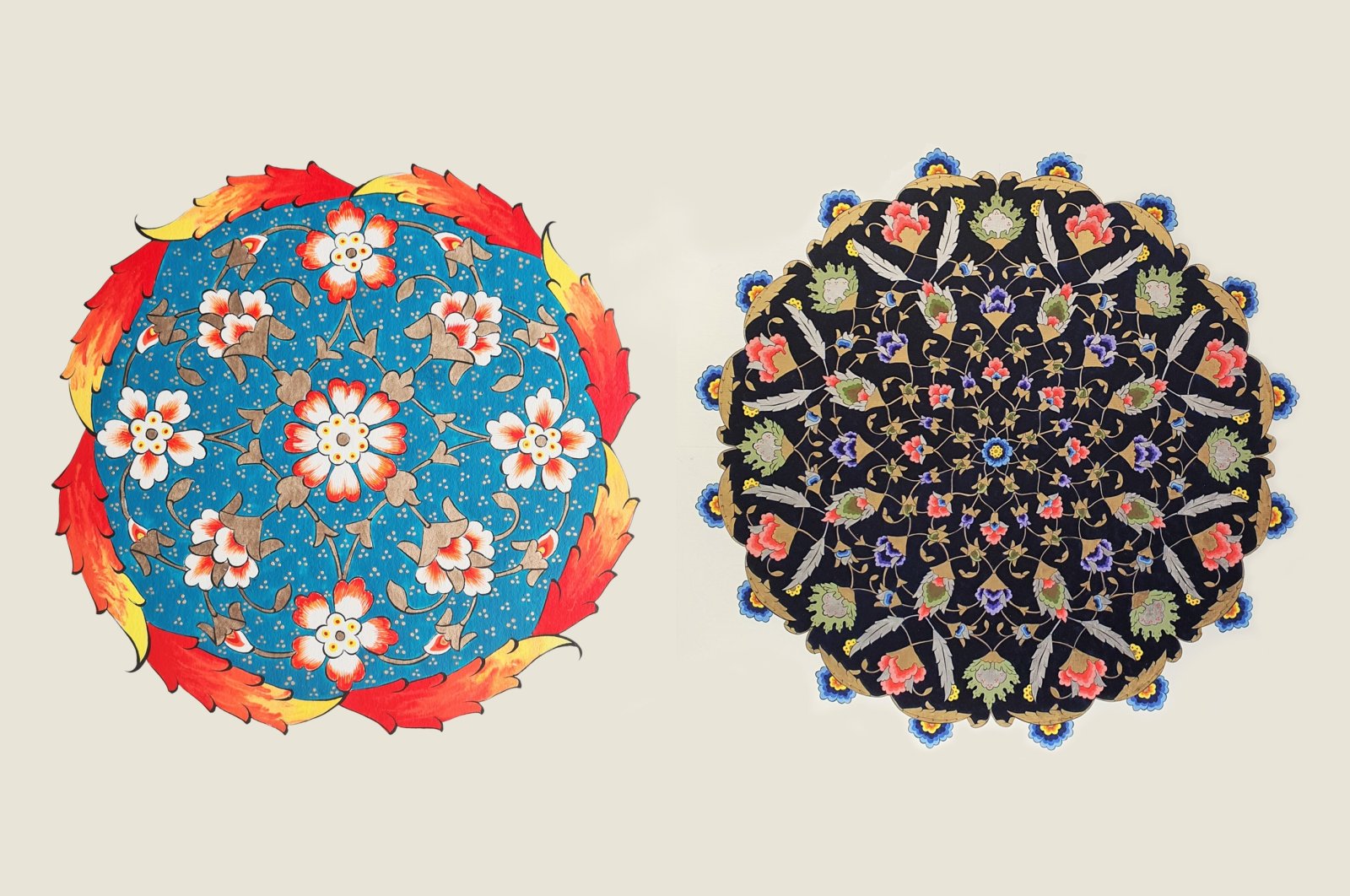 The form is a beautiful branch of decorative arts with a very long and deep history in Turkish culture. Nagihan Seymour introduces this traditional art to the world with her latest exhibition in the U.K.

Traditional decorative arts like calligraphy, miniature and marbling have created a rich mosaic in Turkish lands by combining their own values with the cultural heritage of various civilizations from Anatolia's thousands of years of history. Forming an important part of traditional Turkish culture and heritage for centuries, the history of these arts generally dates back to the Turkic peoples of Central Asia.

The art of illumination, which means “decoration with gold” in the most general sense, is one of these valuable arts introduced by the Uyghurs in Central Asia. Managing to survive to date, illumination was brought to Turkish lands with the Seljuk Empire and magnificently developed during the period of the Ottoman Empire.

The Ottoman artists performing illumination usually decorated manuscripts like books and plates with 18 and 22 carat crushed gold and various colors. It was a common practice to illuminate all kinds of manuscripts, especially poetry books, that were presented to sultans, viziers, statespeople and prominent figures in those times. Illumination was mostly used on the pages of the Quran, as the decoration of a book with illumination showed that it was very valuable. However, this decorative art dominated not only manuscripts but also other branches such as tiles, ceramics, fabrics and carpets.

Illumination reached its peak during the reign of Ottoman Sultan Suleiman I, commonly known as Suleiman the Magnificent (1520-1566). In this period, rich workmanship detailed illumination; gold was used a lot and dark blue became the important color. In the 18th century, with the Tulip Era, Western influence began to be apparent on Ottoman culture and art, and new patterns influenced by Western motifs also emerged in the art of illumination. In this context, Turkish illumination was affected by the French Rococo, which is an exceptionally ornamental and theatrical style of architecture and decoration art. As a result of this effect, the classical form was completely abandoned. In the classical approach, artists had repeated the forms and patterns created and used throughout history along with using them in different compositions without disturbing the main structures of the forms. But, instead of the classical patterns – large flowers, bouquets in vases, pots or baskets and flowers tied with ribbons were used abundantly during the Tulip Era. The same style continued until the end of the century.

The art of illumination sunk into oblivion with the spread of the printing press and the decrease in manuscripts. However, thanks to the famous Turkish polymath Süheyl Ünver’s works, this art form was revived in the 20th century again and it is still used as decorative art in many areas by talented artists today.

Among these artists, Nagihan Seymour stands out as she dedicated herself to introduce this mesmerizing art to the international art scene. Even though she was educated as a materials scientist, Seymour was drawn to this art after receiving courses from illuminator and calligrapher Hanifi Dursun in Istanbul. Little did she know when she started these courses that illumination would change the direction of her life. According to the artist, illumination fits with her mathematics and engineering background but also gives the opportunity to express herself artistically within the rules of the art form.

Seymour, who has learned the art of illumination through the master-apprentice relationship, follows the classical approach in her artwork. Her illuminated paintings bring a breeze of old times through every single motif and pattern. However, as a modern artist, she is also a true seeker for knowledge who is always in search of new methods and techniques. The artist says that your master becomes a lifetime guide for you in your artistic journey. Therefore, she still follows the traditional rules of the art which she learned from her teacher and also tries to give a new breath to her pieces with her own designs.

Seymour recently opened a new illumination exhibition at The Lightbox gallery and museum in the U.K. “The Four Elements” offers visitors fascinating paintings and ceramics which reveal the oeuvre and artistic development of the artist. Whereas the artworks decorated with natural pigments and precious materials prove her commitment to classical methods and promote the art of illumination, her plays in the perception of symmetry show her novel, fresh take on this art.

“The Four Elements” explores the elements of earth, water, air and fire – which were believed by the ancient Greeks to explain the nature and complexities of all matter – through the designs of the artist. Seymour displays her paintings and ceramics on different walls of the gallery symbolizing the four elements.

This show is Seymour's second exhibition at The Lightbox. Inspired by nature in the design process of this exhibition, the artist presents symmetrical designs consisting of naturalistic floral ornamentations or patterns with simple expressions. But, one can easily recognize that the artist also has tried to break the symmetry in a couple of pieces while preserving the symmetry within the pattern at the same time. “Dandelion,” depicting this beautiful flower with many other small floral designs, is a good example of this effort. While the painting brings a scene when a dandelion turns to seed through a blow, it also keeps the harmony within the patterns of every petal.

Along with her illuminated paintings, Seymour also exhibits a collection of ceramic works in this show. Getting her first kiln a couple of years ago, the artist has recently focused on working with clay and glazing in her studio in Horsell. These ceramics, like her paintings, bear fine workmanship and captivate the audience from the very first look. After throwing just a glance at them, the details of the ceramics assure you that the artist manages one of the most challenging aspects of art. She simplifies and stylizes the infinite complexity of the natural world and applies it in her patterns and designs.

You can visit “The Four Elements” until June 6 to examine the artist's works that breathe new life into this ancient form of illumination.