US university to display replica of Turkey's 'Gypsy Girl' mosaic 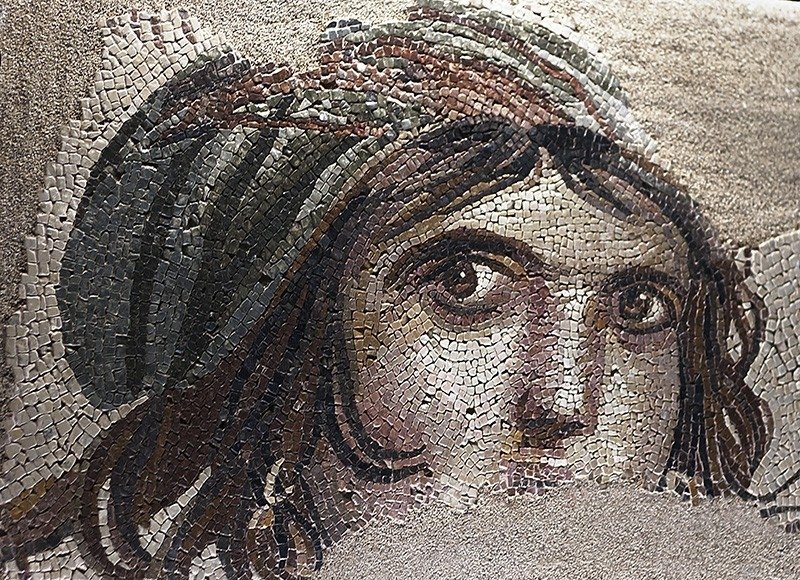 The reproduction of the world-renowned "Gypsy Girl" mosaic, whose stolen pieces were returned from the United States to southern Gaziantep province after yearslong efforts, was sent to the U.S. state of Ohio on Saturday. The replicas of the mosaic's 12 pieces will be on display for visitors at the Wolfe Center for the Arts at Bowling Green State University.

A ceremony was held for the "Gypsy Girl" mosaic replicas in front of the Zeugma Mosaic Museum on Saturday. Speaking at the ceremony, Gaziantep Governor Davut Gül explained that artifacts in Gaziantep are being unearthed meticulously.

Mentioning the latest work in the city, he said a welcoming area has been constructed in the ancient city of Karakamış. The governor noted that work on the construction of a museum consisting of artifacts from Karakamış also continues.

According to the statements of the governor, another welcoming area was also built in the ancient city of Zeugma, as well as an 8-kilometer (5-mile) tourism road so that people can easily reach the city.

"In addition, the remaining part of the completion of the restoration of Rumkale, the pearl of the Euphrates, was auctioned this year," he added.

They are the most important works from the Roman, Hittite, Ottoman, Seljuk and Republican periods of Anatolia, said Gaziantep Mayor Fatma Şahin.

"Anatolia is an open-air museum. Cultural heritage is now of rising importance in the world. The world of 'the more gold, oil and natural gas you have, the richer you are' is over. Now, how much cultural heritage you have, how much trained human power you have is how rich you are. We are all bearing witness to this new world order," said Şahin. "As Gaziantep, we are the greatest bridge and carrier of this great civilization. We make a great effort to introduce the beautiful works of these five ancient cities, located at history's point zero, to the world."

"We have restored places that we did not look after as we saw them as ruins, that we were not interested in, and brought them back to our country and the world. Today we have received tremendous support from all relevant ministries," she stressed.

"Zeugma represents the Roman era, the 'Gypsy Girl' is our 'Mona Lisa,'" she said, mentioning that "The 'Gypsy Girl' was alone. She waited 60 years to be reunited with her family."

"We saw the 'Gypsy Girl' pieces at Bowling Green State University. We immediately requested them through our ministry, but the previous management at the university did not accept this. We applied again when the university rector changed," she said.

"According to our protocols, we returned the 'Gypsy Girl' to her family, but in the second phase, we had an important promise for them. We would make replicas of the mosaic. Thanks to our mosaic masters, we have made the replicas with the stones of the Euphrates in close accuracy to the original.”

After the speeches, the replicas were loaded onto a truck and sent to Gaziantep Airport and then to the U.S.