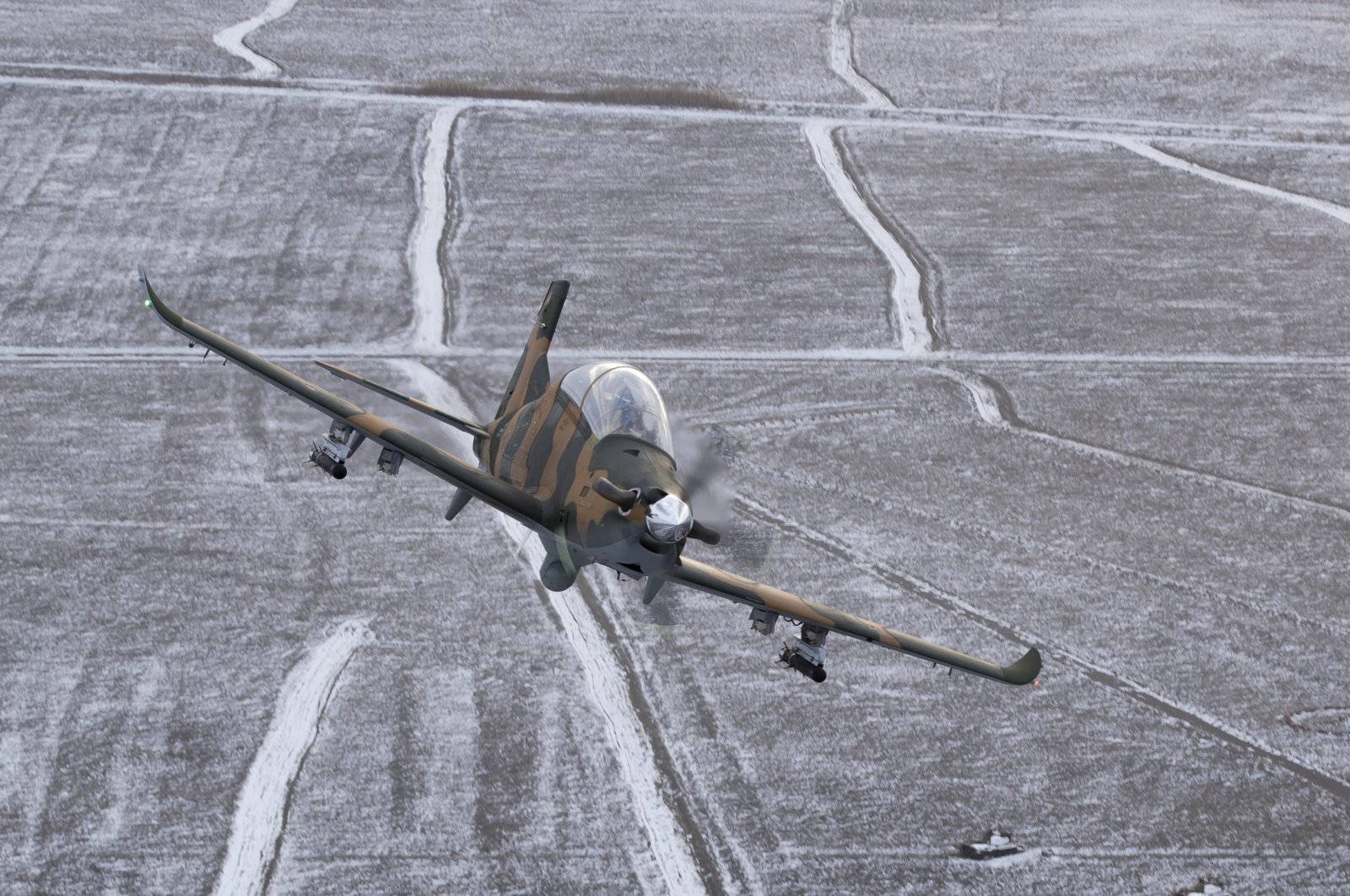 TAI's Hürkuş-C aircraft is pictured mid-flight in this file photo from Dec. 31, 2018. (Courtesy of the Presidency of Defense Industries)
by DAILY SABAH Apr 26, 2021 2:38 pm
Edited By Ayşe Betül Bal
RECOMMENDED

Turkey will soon export its domestically developed Hürkuş-C armed close air support and training aircraft to a yet undisclosed country, according to its manufacturer Turkish Aerospace Industries (TAI).

"We cannot disclose the country because the contract has not been signed yet, but it will take place,” he said.

The Hürkuş aircraft family was designed by TAI to support different missions in the country’s training programs.

In addition to training pilots, the low-cost, high precision Hürkuş-C was developed to perform in light attack and armed reconnaissance missions.

The light attack and armed reconnaissance variant of the Hürkuş-C offers a low-cost, flexible solution against asymmetric threats, a common reality in today's battlefields.

While maintaining the advanced training capabilities of Hürkuş, with its seven external load stations, Hürkuş-C offers users a large payload capacity of up to 1,500 kilograms (3,306 pounds) that can be utilized to perform challenging missions at high altitudes and demanding geographies, under day and night conditions.

External load capacities of the aircraft include general-purpose bombs and homegrown ammunition, like Roketsan’s long-range anti-tank missile, Umtaş, and laser-guided Cirit missiles and KGK-SIHA-82 useful load that was developed by the Defense Industries Research and Development Institute (SAGE) under the Scientific and Technological Research Council of Turkey (TÜBITAK). It will also feature two 12.7 mm and 20 mm gun systems, a 2.75-inch rocket assortment, or training bombs.

The company head was also optimistic about the export of the TAI’s T129 tactical reconnaissance and attack helicopters, ATAK, to the Philippines, subject to an engine export permit from the U.S.

An engine purchase agreement, in the meantime, has been signed with Ukraine, he said for the T929 helicopter, the ATAK 2.

Kotil also touched on the recent move by the U.S. to officially expel Turkey from the F-35 fighter jet program.

He said the F-35 is not that much on the company’s agenda anymore but the TF-X National Combat Aircraft (MMU) is.

“It must be completed,” Kotil said, noting that it is now more important than ever to produce this aircraft.

This project, Kotil continued, also increases the need for new engineer recruitment for the TAI, as he invited young engineers interested in the defense industry to work with them.

"We currently have 4,000 engineers at TAI. We need to increase the number of engineers to 10,000,” he said, adding that the company needs 6,000 engineers only for the MMU.

The United States and eight other countries have abolished the 2006 deal regarding the F-35 program and signed a new agreement that has excluded Turkey, Anadolu Agency (AA) cited a U.S. defense official as saying last week.

Washington removed Turkey from the F-35 Lightning II jet program in 2019, arguing that the S-400 air defense system acquired by Turkey was incompatible with NATO systems and could be used by Russia to covertly obtain classified details on the F-35.

The MMU is a fifth-generation jet with similar features to the F-35. The domestically built aircraft is being developed to replace the Turkish Air Force Command's F-16 fighters, ahead of the gradual phasing out of the latter throughout the 2030s.

The homegrown fighter jet is expected to make a maiden flight using a domestic engine in 2029. Work to develop the engine also continues at full speed in cooperation with related institutions.

Speaking about the company’s other products, Kotil said the Aksungur, a medium-altitude, long-endurance (MALE) unmanned aerial vehicle (UAV) is set to be delivered to the Turkish Air Force by the end of the year.

We have produced five units of this particular UAV with high payload capacity, he said, noting that it was produced entirely with the company’s own means and made its maiden flight just in 18 months.

After the completion of the Aksungur project, the company will accelerate works on Göksungur that will be Turkey’s first UAV capable of supersonic cruising speed.

Kotil noted that there is no schedule for the Göksungur yet but one project follows the other according to TAI's working principle, thus placing it in line following the delivery of Aksungur.

“Göksungur will be a supersonic UAV that can be launched from Aksungur,” he added.

Aksungur on Sunday hit a target at a range of 30 kilometers with the KGK-SIHA-82, which weighs 340 kilograms, and was fired by the UAV the first time, Presidency of Defense Industries (SSB) Chairperson Ismail Demir said on Twitter.

The firing test was carried out off the Black Sea province of Sinop and at an altitude of 20,000 feet, according to a statement by the UAV’s manufacturer. The shooting range will be increased to 45 kilometers with the same ammunition soon, TAI said in a statement.

Kotil also spoke on the high-speed target UAV, Şimşek, which was initiated by TAI as a research and development (R&D) project in 2009 to meet the training needs of the Turkish Armed Forces (TSK) air defense units.

“There are 5 kilograms of explosives on Şimşek and it travels about 100-200 kilometers when it is dropped from a drone. We produce 100 pieces a year from Şimşek,” the TAI head said.

Şimşek, the original design of TAI, which is used in various firing tests such as those from air defense systems and most recently during the homegrown missile Bozdoğan test, was previously integrated into TAI’s Anka UAV.