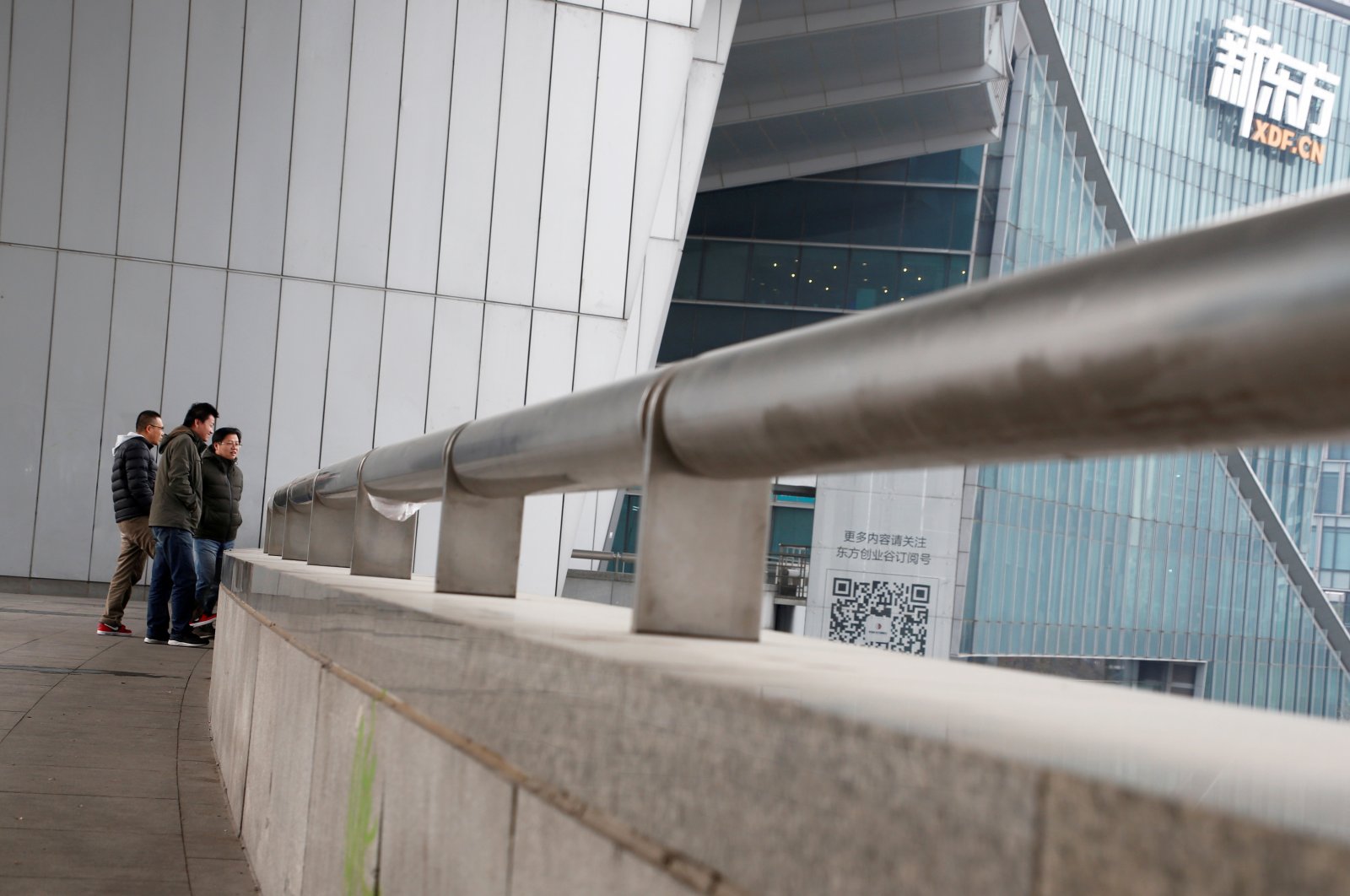 People stand outside the headquarters of the New Oriental Education & Technology Group in Beijing, China, Nov. 25, 2016. (Reuters Photo)
by REUTERS Jul 26, 2021 8:49 am
RECOMMENDED

Chinese shares tumbled to their lowest levels this year Monday as investor worries over the impact of government regulations kneecapped the education and property sectors after Beijing barred for-profit tutoring in core school subjects.

China's blue-chip CSI300 index fell 3.2% to end at its weakest close since December and Hong Kong’s benchmark sank over 4%, wiping off more than 40% of the market value of educational firms. This comes as China’s tech shares are still reeling from a crackdown.

Beijing’s sweeping new rules have left private education firms facing a significant business impact as Beijing steps up regulatory oversight of a $120 billion industry that investors had bet billions of dollars on in recent years.

The news sent shockwaves through the sector and parents struggled to understand how exactly the move would impact their children in a highly competitive education system.

Under the new rules, all institutions offering tutoring on the school curriculum will be registered as non-profit organizations, and no new licenses will be granted, according to an official document.

The rule changes, which are much tougher than previously expected, have put at risk billions of dollars of public and private capital ploughed into the sector over the last few years on hopes for continued demand in the world’s most populous country.

Louis Tse, managing director at Wealthy Securities in Hong Kong, said the curbs were needed to prevent “chaos” in a profitable sector.

“The Chinese government... in a way it’s right, they want to put a heavy hand and try to regulate that industry to make it more acceptable,” he said. “Of course investors... I won’t say they suffer. They won't earn that much anymore.”

The crackdown on tutoring firms follows a tightening grip on China’s internet sector that has rattled global investors.

Media reports that China’s central bank has ordered lenders in Shanghai to raise the rate of mortgage loans for first-time homebuyers followed a statement from the housing ministry on Friday that China will strive to clean up irregularities in the property market in three years.

Shares in China Evergrande Group, the heavily indebted developer whose financing difficulties have stoked broader apprehensions about the outlook for the property sector, fell 7%. Evergrande shares have fallen by a third this month, and are down more than 54% this year.

“We believe China’s economy, and specifically its financial system, will face significant risks in coming months due to the unprecedented tightening measures applied to the property sector,” economists at Nomura said in a note Monday.

U.S.-listed TAL Education Group said on Sunday it expected the new rules to have “material adverse impact on its after-school tutoring services... which in turn may adversely affect” its operations and prospects. It did not elaborate.

The new rules will result in existing online tutoring firms being subjected to extra scrutiny and after-school tutoring will be prohibited during weekends, public holidays and school vacations, the document said.

Curriculum-based tutoring institutions would also be barred from raising money through listings or other capital-related activities, while listed companies would be banned from investing in such institutions, it said.

Scholar Education said that authorities had yet to provide details around the implementation of the rules and there were uncertainties as to when and how such rules will become specifically applicable to the group.

Goldman Sachs said in a research note its one year price targets on the listed tutoring stocks would be cut by 78% on average. The impact, the note said, would be mostly due to the ban on weekend and winter and summer holiday tutoring, which brought in up to 80% of the firms’ revenue.

China’s for-profit education sector has been under scrutiny as part of Beijing’s push to ease pressure on school children and reduce a cost burden on parents that has contributed to a drop in birth rates.

In May, China said it would allow couples to have up to three children, from two previously.

More than 75% of students aged from around 6 to 18 in China attended after-school tutoring classes in 2016, according to the most recent figures from the Chinese Society of Education, and anecdotal evidence suggests that percentage has risen over recent years.

Citing a person in charge at the Ministry of Education, a Xinhua report on Sunday said the move was needed to tackle a huge burden on primary and middle school students and their parents’ finances.

Dave Wang, portfolio manager at Nuvest Capital in Singapore, said “the Chinese government has always been more particular on sectors that have widespread social implications.”

Some parents, however, struggled to understand how the new rules will impact the education of their children.

“In the long run, it is definitely good news for the children as they don’t have to immerse themselves in endless homework,” said Zhu Li, a Chinese parent in Haidian District in Beijing.

“But on the other hand, it might not be so good if they fail to enter a good university.”