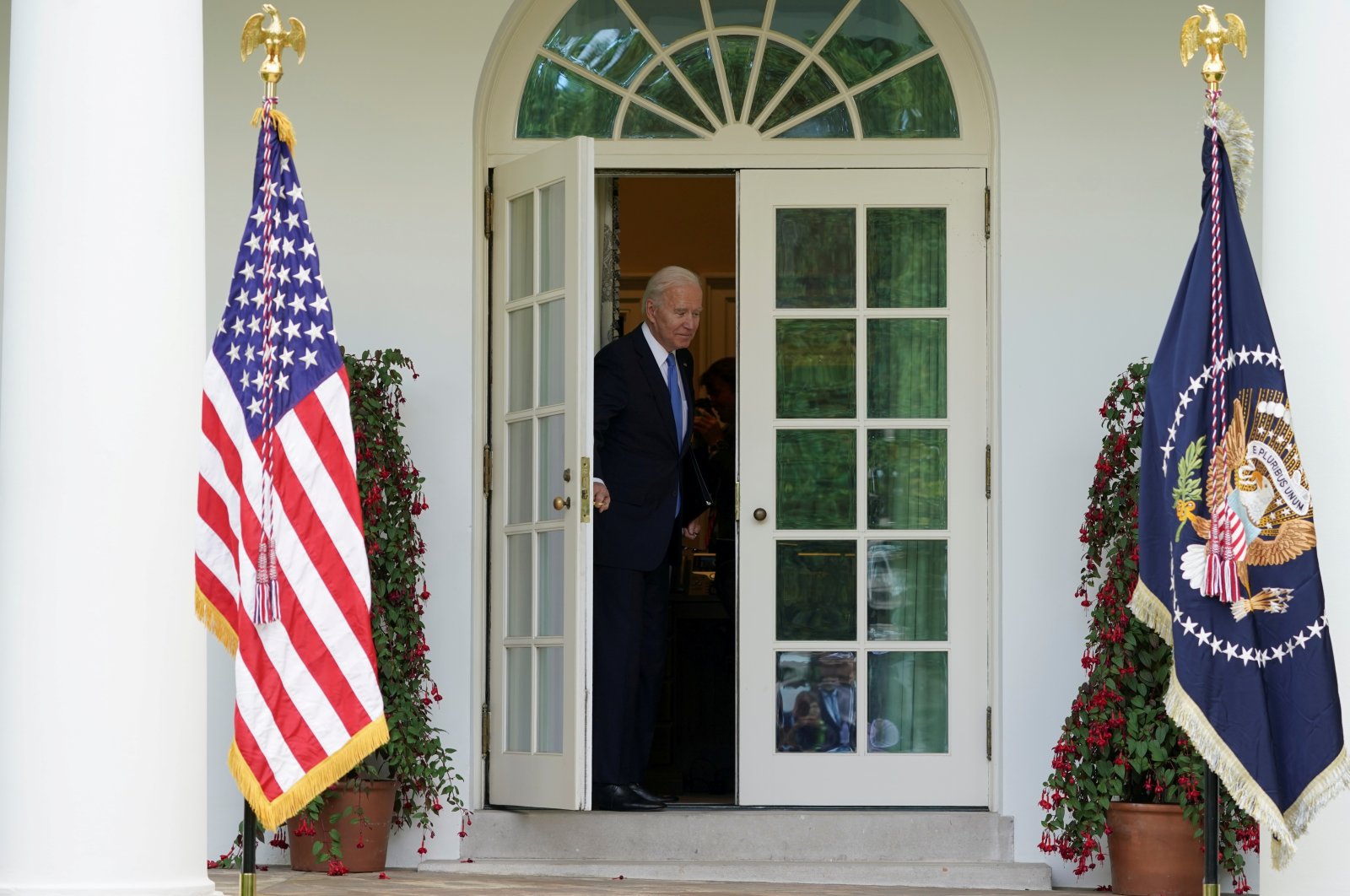 U.S. President Joe Biden leaves after speaking about the COVID-19 response and the vaccination program from the Rose Garden of the White House in Washington, U.S., May 13, 2021. (Reuters Photo)
by Reuters May 16, 2021 2:07 pm
RECOMMENDED

Severely hit by the coronavirus pandemic, the U.S. economy under President Joe Biden is on a path to recovery. Yet, many believe the White House's road to a stable economy is not that clear.

They're a bad memory for Americans old enough to remember the 1970s – but they're also likely causing a few sleepless nights in the White House.

The jolts are dampening consumer confidence, ramping up inflation fears and helping Republicans build their case against President Joe Biden and his ambitious plans to revamp the U.S. economy with trillions in new spending.

As the 1970s show, the high joblessness and rising prices the United States saw in April can be a potent political force.

Republicans crafted a "misery index" out of the two factors to attack then-President Jimmy Carter. After hitting 75% approval ratings early in his presidency, the Democrat was trounced in a 1980 landslide.

The White House says there's bound to be surprises as the U.S. emerges from an unprecedented pandemic.

"We must keep in mind that an economy will not heal instantaneously," Cecilia Rouse, the chair of the White House Council of Economic Advisers, told reporters Friday. "It takes several weeks for people to get full immunity from vaccinations and even more time for those left jobless from the pandemic to find and start a suitable job."

Rouse, speaking to reporters at the White House, said a mismatch between supply and demand due to the pandemic and the economic snap-back had pushed inflation higher but that the mismatch should prove temporary.

"I fully expect that will work itself out in the coming months," she said.

The Federal Reserve (Fed) also is betting heavily that inflation will cool on its own, even as hiring picks up steam over the summer, Americans start to travel again, and the Fed keeps its massive crisis levels of support intact. The White House wouldn’t offer a timeline for when the economy will smooth out. But it doesn't expect a repeat of April's weak jobs report, and recent data show applicants for unemployment benefits fell to a 14-month low.

"The trend lines continue to be positive," a senior White House official told Reuters on Wednesday. The White House also believes the Fed can handle what comes up, he said.

"We haven't seen anything that is suggested that the Fed doesn't have an ample toolkit to manage any of the risks that might present themselves."

Still, there will be more turmoil in the months to come.

Republicans, divided by former President Donald Trump's false claims that the 2020 election was stolen from him, have seized the moment to knock the foundation of Biden's economic plans – raising taxes on the wealthy and companies.

"You won't find any Republicans who are gonna go raise taxes. I think that's the worst thing you can do in this economy," House Republican leader Kevin McCarthy told reporters outside the White House, citing inflation fears and gas prices.

The U.S. Chamber of Commerce, the powerful corporate lobby group, is pushing for a repeal of special unemployment payments that were a cornerstone of Biden's campaign, and over a dozen state governors have decided to roll them back early.

With 7.5 million more people either unemployed or out of the job market altogether compared to before the pandemic, even a month or two more of weaker-than-expected job growth and rising prices would up the pressure on Biden and the Fed.

"If we get one more April that is concerning," said Gregory Daco, chief U.S. economist at Oxford Economics.

Some early data suggest that May's jobs report could be weak as well.

If workers don't take jobs for whatever reason – continued fear of disease, lack of child care, and higher-than-usual unemployment benefits have been cited – it would indicate "a significant supply constraint," Daco said. Then, he said, "the question is how do you get people back? And that is a different question than pumping stimulus into the economy."

The Biden administration, workers, labor advocates and some economists have argued firms should raise wages if they're having trouble hiring, and some, including McDonald's Corp., have followed suit.

"The question of how to unclog the labor market is going to be a critical one," and could limit overall economic growth this year if it takes too long, said Richmond Federal Reserve President Thomas Barkin.

While "unsticking" the labor market is one challenge, stamping out price flare-ups as Americans return to schools and offices and go on vacation once again is another.

Consumer sentiment in early May tumbled as people worried about rising prices. Inflation expectations for the year ahead and over the next five years rose to their highest in more than a decade.

"You have a logistical challenge of shutting down an economy and bringing it back up and we are not built for that," Barkin said.

The Colonial Pipeline shutdown that led to gas lines in some southern states had nothing to do with the pandemic and was lifted Wednesday. But it could take "some time" before it returns to normal, Biden said Thursday.

A semiconductor shortage that started before Biden took office continues to drive up car prices, as pandemic-shy Americans look for alternatives to public transportation.

Homebuilders point to surging lumber prices they say threaten the critical housing market and the broader economy. Prices for materials used in construction jumped 19.7% from April 2020 to last month, the largest increase in the 35-year history of the series, according to Ken Simonson, the chief economist for the Associated General Contractors of America.

The White House declined to elaborate on specific remedies it might pursue to help the supply side of the economy but pointed to steps to bring fuel to market after the Colonial Pipeline shutdown.

Carter and his predecessor Republican Gerald Ford found inflation impossible to beat but faced more endemic problems in the 1970s.

A Ford push to encourage Americans to save more and spend less, "Whip Inflation Now," or WIN, was an abject failure.

Gas lines then were the result of entrenched geopolitics, not a one-off hack. Inflation was much higher and fed by countrywide psychology that prices and wages should just keep going up – an important difference that Fed officials are adamant they will not allow to reoccur.

The country actually added an average of 215,000 jobs monthly during the Carter years. Yet unemployment was rising because so many new workers were joining the labor force, thanks to demographic trends and more women working outside the home for the first time.

Biden faces a very different problem – a job market in the wake of a deadly pandemic that has left workers constrained, nervous, or living off savings and unemployment benefits for now. But that doesn't mean his job is any easier.