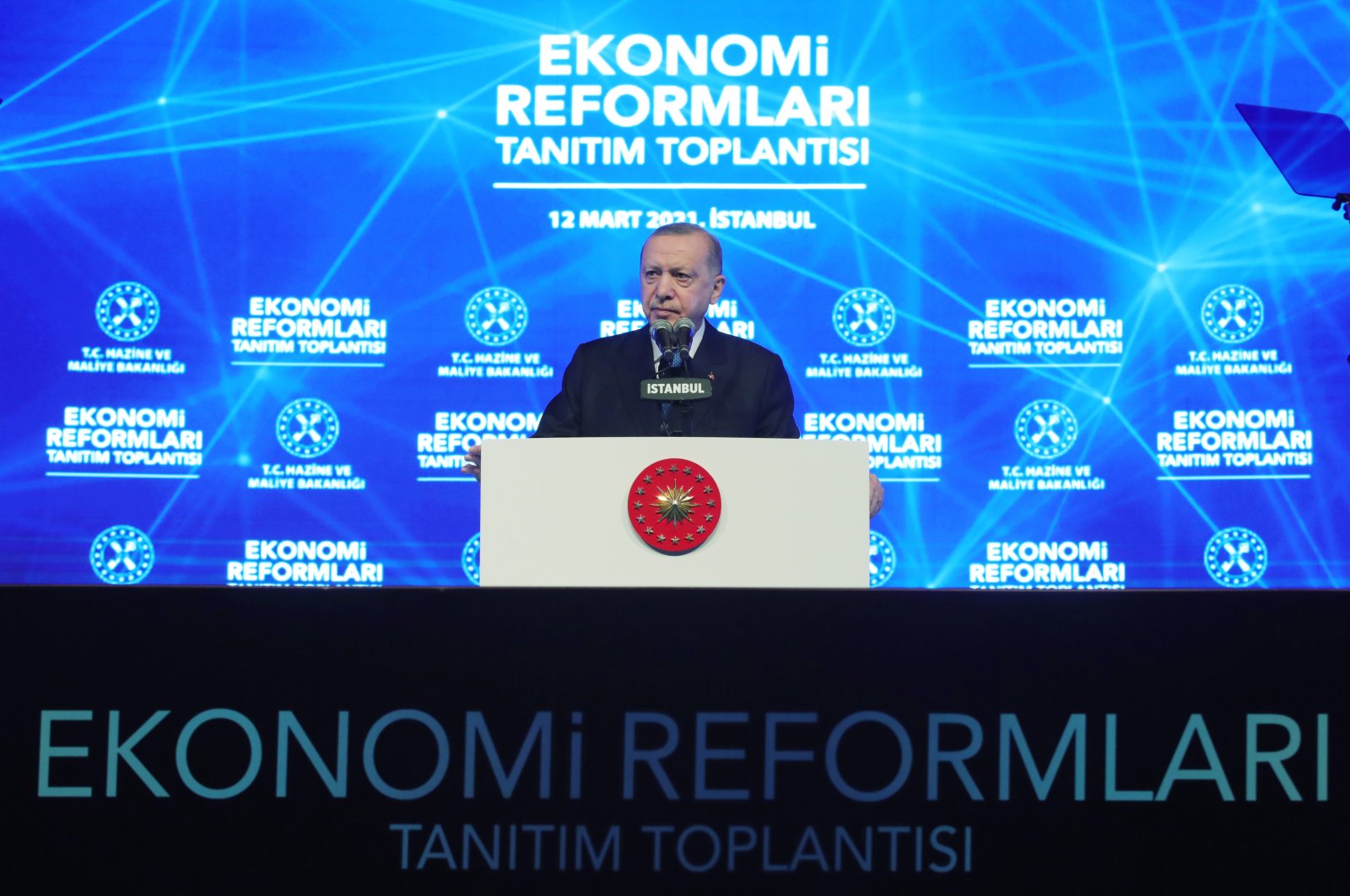 President Recep Tayyip Erdoğan on Friday outlined a series of measures that he said would lift the country's economy, as he pledged to bring inflation back down to single digits.

In a speech unveiling the highly anticipated economic reform package, Erdoğan pledged that his government would increase Turkey’s potential growth through productivity driven by investment, employment and exports.

Macroeconomic and structural policies will form the backbone of the new economic road map, the president said, as he vowed, among other measures, to reduce public expenses and narrow the current account deficit.

He also announced plans to set up price, financial stability and economic coordination committees to navigate the changes.

“We will increase potential growth through efficiency, and we aim for a national and domestic economy where imports are lowered, and with added-value exports,” the president said.

Turkey was one of only a few countries to avoid an economic contraction in last year’s coronavirus fallout. The gross domestic product (GDP) grew 5.9% in the fourth quarter and 1.8% in 2020 as a whole, according to official data.

“Despite the coronavirus pandemic, the Turkish economy grew 1.8% in 2020 and ranked second only to China among G-20 countries,” Erdoğan said.

The president vowed to support plans that ensure stronger public finance that will guard against risks, with fiscal discipline being the top priority.

As part of macroeconomic stability, he said the country is focusing on the areas of public finance, inflation, the financial sector, the current account deficit and employment.

Efforts will be particularly boosted to curb the current account deficit, an ongoing issue for the economy.

Erdoğan named three policies that he said will be followed regarding the issue.

Namely, the country will focus on the structural current account deficit, encourage small and medium-sized enterprises (SMEs) that have never made exports before and support green transformation in the industry sector.

On the structural policies side, Erdoğan said, “Strengthening the institutional structure, encouraging investments, facilitating internal trade, competition policies, market surveillance and supervision have been included in the scope of our reform.”

What’s more, the president emphasized that efforts would be ramped up to decrease foreign exchange’s share of total debt stock to reduce sensitivity to external shocks.

“Savings will be expanded in public administration such as limiting vehicle rentals and hospitality costs,” Erdoğan noted.

Below are some of the details of the economic reform package:

Reforms to fight against inflation

The country’s priority will be fighting against the rise in consumer prices, with the aim of reaching single-digit inflation, Erdoğan stressed.

He said the rise in inflation has structural and periodical reasons.

“We are establishing the price stability committee. We believe this committee, in which the finance and treasury, and technology and energy ministers will be involved, will increase the effectiveness of the fight against inflation,” he said.

The inflation has been stuck in double digits for most of the last four years and has edged higher in the last four months despite sharp interest rate hikes late last year.

The central bank has already lifted the policy rate from 10.25% with hikes in November and December. The benchmark rate was held steady in January and February meetings.

Erdoğan also announced the formation of a bond guarantee fund to support company bond auctions and said state-backed loans would be on offer to small businesses hiring additional employees.

In the package he said was drafted in consultation with the private sector and nongovernment organizations (NGOs), the president said tax policies will be simplified, taking into account issues raised by international investors.