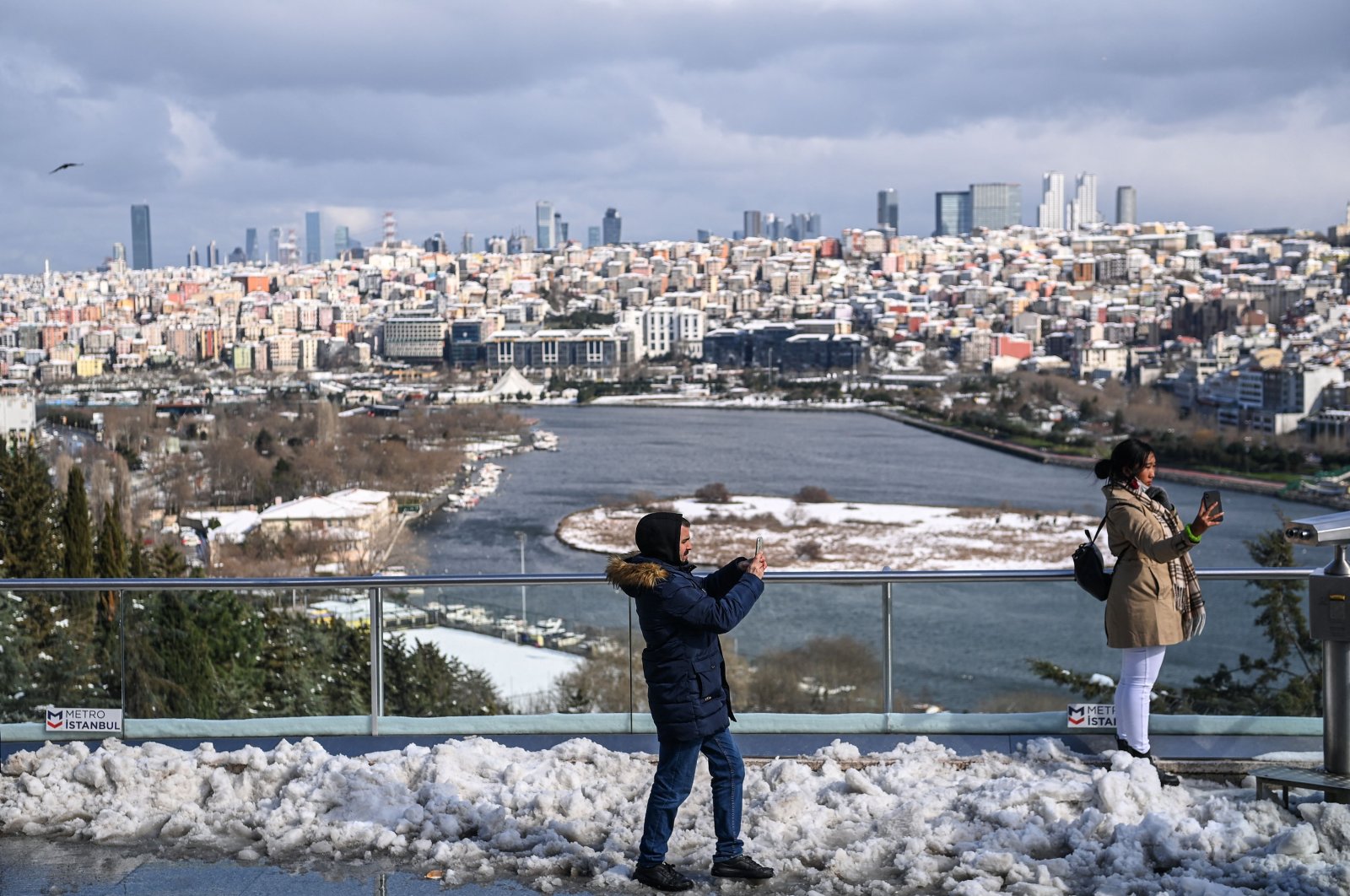 People take pictures at the Pierre Loti hill near the Eyüp Sultan neighborhood in Istanbul after a heavy snowfall, Turkey, Feb. 16, 2021. (AFP Photo)
by DAILY SABAH WITH AGENCIES Mar 01, 2021 10:05 am
RECOMMENDED

Turkey’s economy grew a less-than-expected but still robust 5.9% in the fourth quarter of 2020 and 1.8% in the year as a whole, data showed on Monday, emerging as one of only a few globally to skirt a contraction amid the coronavirus pandemic.

Propelled by a burst of credit in mid-2020, the fourth-quarter gross domestic product (GDP) grew 1.7% from the previous quarter on a seasonally and calendar-adjusted basis, the Turkish Statistical Institute (TurkStat) said.

A surge in GDP growth in the second half of the year that surpassed Turkey’s potential rate was driven by a near doubling of lending by state banks to face down the initial virus wave.

The Turkish lira firmed to 7.3175 against the U.S. dollar after the GDP data and was 1.5% stronger than Friday’s close.

Commenting on the data, Treasury and Finance Minister Lütfi Elvan pointed out that Turkey was one of the few countries to end 2020 with positive growth.

World economies mostly contracted and tumbled into recessions last year, with emerging and developing nations shrinking by some 2.4%, according to the International Monetary Fund (IMF).

Only Turkey, China and Egypt were among those seen growing, the IMF said.

In a Reuters poll, GDP was forecast to have expanded 7.1% year-on-year in the fourth quarter, despite new curfews and curbs on the service sector to address a second COVID-19 wave, and 2.3% for the whole year.

The median of 20 forecasts in a Bloomberg survey was for a 6.9% expansion.

A panel of 21 economists polled by Anadolu Agency (AA) had projected a 2.2% growth. Last year, the government had forecast GDP growth of 0.3%.

Economists’ forecast for the last quarter was 7% on average, ranging from 5% to 8.3%.

Below are highlights of the GDP report released by TurkStat:

The economy registered a growth of 6.3% in the third quarter of last year after a contraction of 10.3% in the second quarter as the coronavirus’s impact started to be felt in earnest. The GDP had expanded 4.5% in the first quarter.

Faced with a second COVID-19 wave, the government imposed new measures at the end of last year but sought to free up supply and production chains.

Ankara is considering lifting some of the latest virus restrictions as of this month. President Recep Tayyip Erdoğan was due to announce gradual normalization steps Monday following the Cabinet meeting in the capital Ankara.

Analysts say the economy should expand by roughly 5% this year despite the tight monetary policy.

The Central Bank of the Republic of Turkey (CBRT), which has repeatedly said it would target inflation more strongly under new Governor Naci Ağbal, has raised its policy rate by 675 basis points to 17% since November to cool inflation. Credit has dropped off dramatically ever since. The benchmark rate was held steady in January and February meetings.

Inflation is expected to have risen to more than 15% last month, polls showed on Friday, as fruit and vegetable prices continue to exert upward pressure. It edged higher to stand at 14.97% in January.

“Our policies fighting inflation will pave the way for more qualified and sustainable investment, production and growth,” he stated.

The central bank expects inflation to come down to 9.4% by the end of 2021. However, it said changes of weightings in the inflation basket will have an upside impact on annual inflation until mid-2021.

The central bank said the changes were projected to increase inflation by 0.5 points by April, then die out toward the end of the year.

A separate data on Monday showed that Turkish factory activity grew at a slower pace in February as new orders contracted slightly, although manufacturers continued to expand production and add staff.

The Purchasing Managers' Index (PMI) for the manufacturing sector fell to 51.7 in February from 54.4 a month earlier, data from the Istanbul Chamber of Industry (ISO) and IHS Markit showed, staying above the 50 mark that separates expansion from contraction.

Signs of improvements in demand led manufacturers to expand production despite a slowdown in new business and issues with the supply of raw materials.

Input costs and output prices continued to rise but at a slower pace mainly due to higher raw material costs, with a strengthening of the lira helping lead to softer inflationary pressures.

“Although there were signs of softening new order inflows in February, the overall Turkey PMI remained in positive territory as firms shrugged off a pause in new order growth and continued to raise production and employment,” said Andrew Harker, economics director at IHS Markit.

“There was also good news on the inflation front. Although supply issues are causing higher raw material prices globally, an appreciation of the Turkish lira has helped to mitigate these pressures,” Harker concluded.