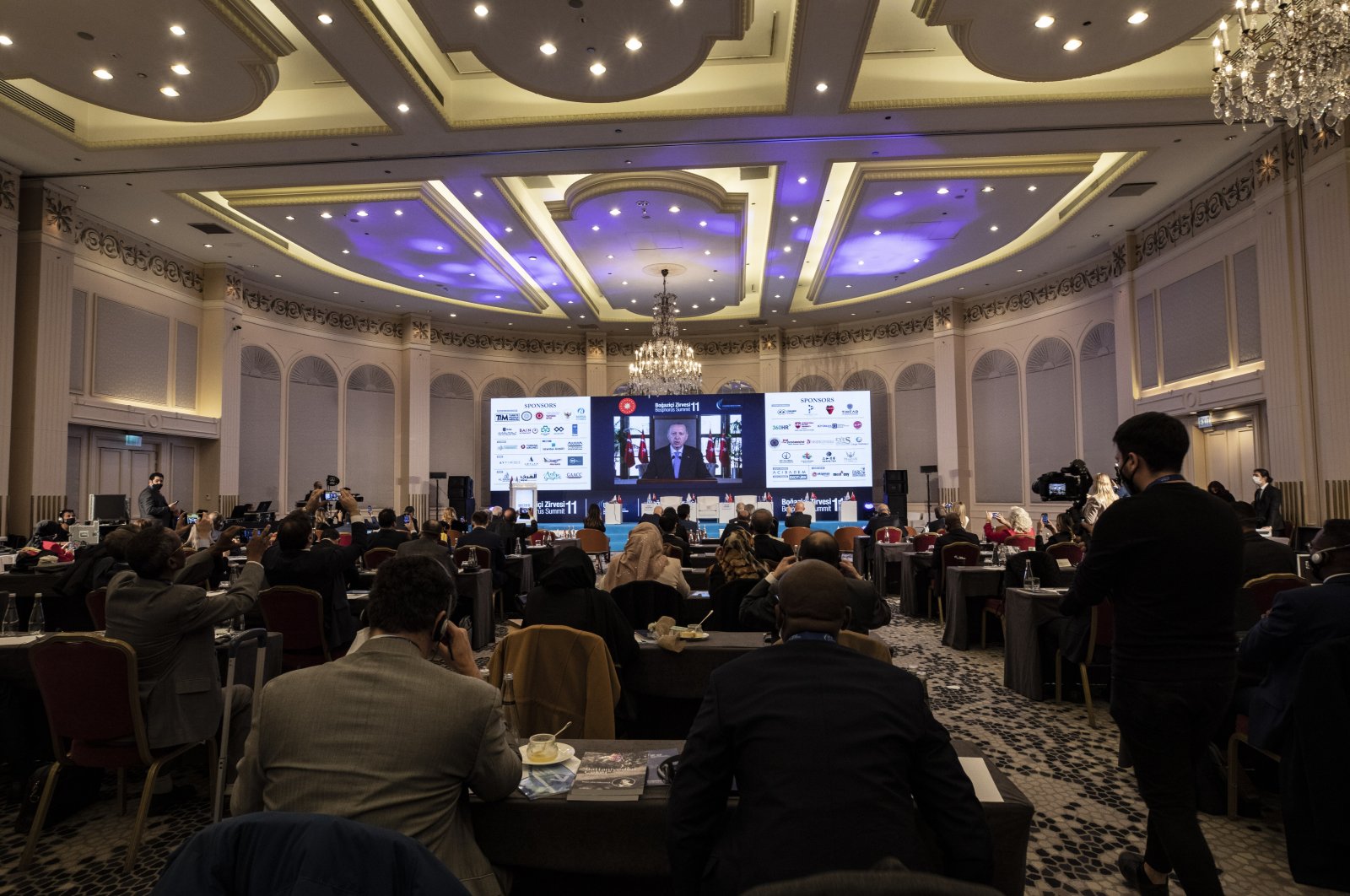 The economic and social policies implemented in Turkey have made it one of the countries that experienced the least amount of damage due to the coronavirus pandemic, the country's president said Monday.

“Turkey is one of few countries which lived through the first year of the pandemic with least damage thanks to its economic, social policies,” Recep Tayyip Erdoğan told the 11th Bosphorus Summit in a video message.

The country’s economy emerged as one of only a few globally to avoid a contraction in 2020 due to the outbreak. The gross domestic product (GDP) grew 5.9% in the fourth quarter and 1.8% in 2020 as a whole, according to official data.

The economy outperformed all its peers except China, Erdoğan said.

World economies mostly contracted and tumbled into recessions last year, with emerging and developing nations shrinking by some 2.4%, according to the International Monetary Fund (IMF).

The president underlined that the pandemic had deeply affected economies, while also negatively impacting many other areas from politics to social life.

Turkey is among the few countries that overcame this crisis with the minimum damage, he said.

He said that during the most difficult days of the outbreak, Turkey had helped 157 countries and 12 international organizations with medical support.

Government support for Turkish citizens against the pandemic’s effects, meanwhile, reached a value of TL 311 billion (over $40 billion), the president added.

Erdoğan stressed that the country would support impact investments that would be vital toward achieving a sustainable economy.

Noting the importance of sustainability in investments, he added that following a strategy of impact investments would have social and environmental benefits.

It will be “very significant” to support companies bringing together this innovative approach with the current conditions of business and social life, the president said.

“We will provide all the support necessary to efforts in impact investment as the Presidency and through our institutions.”

A major international economic event – the Bosphorus Summit – kicked off in Istanbul on Monday with high-profile attendees, physically and virtually.

Organized by the International Cooperation Platform (ICP) under the main theme of “Living In an Age of Uncertainty,” the two-day summit is joined by academics, politicians and experts worldwide.

Talal Abu Ghazaleh, the honorary president of the ICP, said there are uncertainties in the world related to the growing pandemic and economic tensions – such as the U.S.-China trade issue.

Unfortunately, this conflict between superpowers, the U.S. and China, will not end because partials’ demands are not acceptable for other sides, he underlined during the opening ceremony.

Rona Yircali, an honorary board member of the ICP, said the pandemic’s effects could not be calculated globally.

The pandemic process affected several areas of economic activity, including tourism and travel sectors, he recalled.

Ismail Gülle, head of the Turkish Exporters’ Assembly (TIM), said with the impact of the pandemic, a new transformation process in global supply chains has started.

“The trend toward regionalization is getting higher,” he said, noting that the most concrete example of this was seen in November last year when the Asian Regional Economic Agreement – to form The Regional Comprehensive Economic Partnership (RCEP) – was signed.

The partnership’s member countries make up about 30% (2.2 billion people) of the world’s population and 30% ($24.8 trillion) of global GDP as of 2020, making it the biggest trade bloc in the world.

“We must accelerate efforts to increase cooperation with the countries in our nearby geography and catch the wind of change created by global supply chains,” Gülle said.

He noted that the most important way to achieve stability in an age of uncertainty is to change our perspectives.

“As the representative of Turkish exporters, we voice it on every platform that we diversify the export market,” Gülle noted and underlined Turkey should focus on the markets where it has a competitive advantage.

“Turkish exporters have big targets and our biggest goal is ‘Turkey with a foreign trade surplus.’”