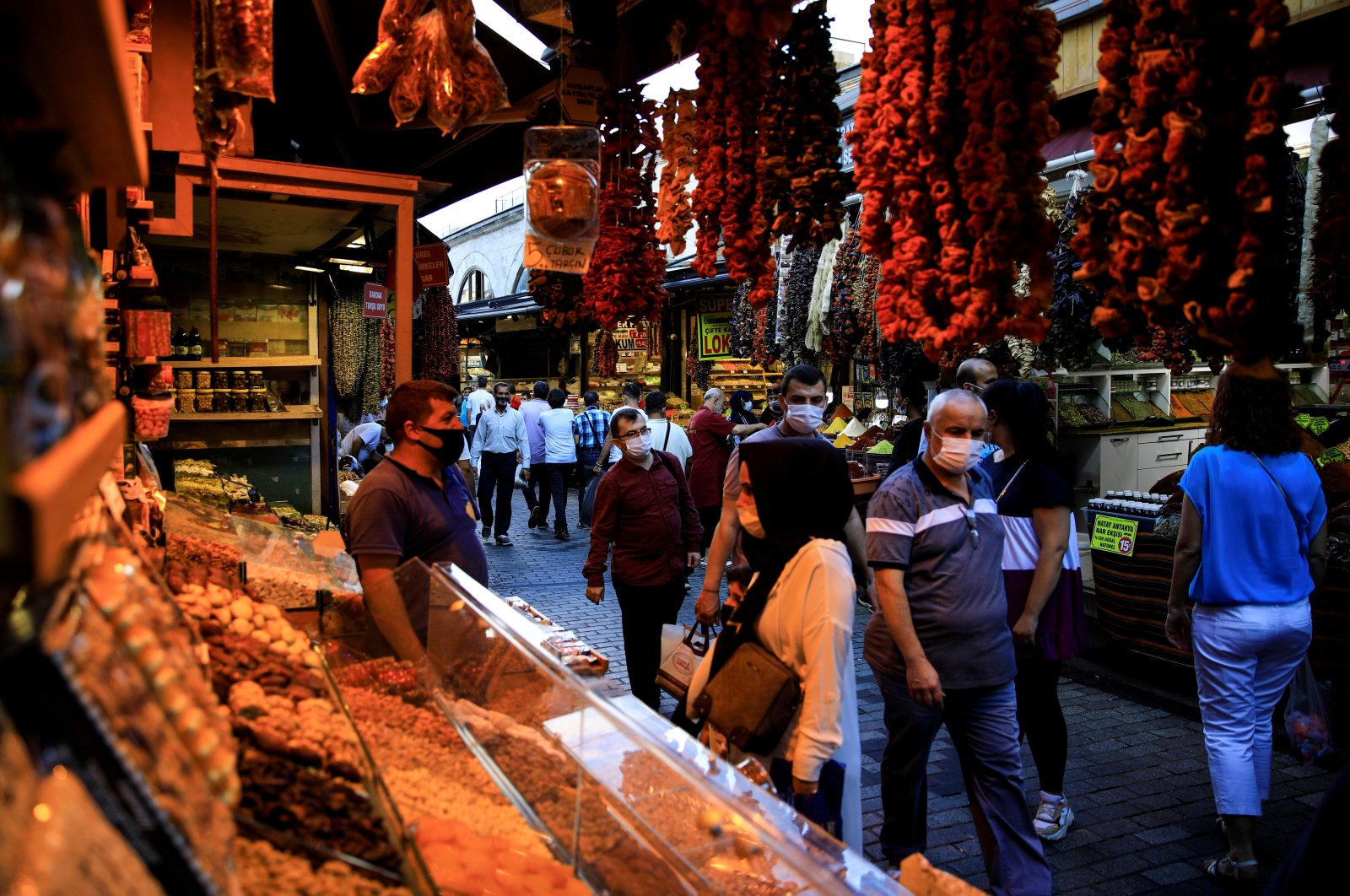 People shop at the Spice Market, also known as the Egyptian Bazaar, as the outbreak of the coronavirus continues, in Istanbul, Turkey, Sept. 9, 2020. (Reuters Photo)
by DAILY SABAH WITH AA Mar 24, 2021 2:10 pm
RECOMMENDED

The price stability committee that is said to boost the effectiveness of Turkey’s fight against inflation and an early warning system for food prices are set to be established in the coming months as part of the economic reform package that was announced earlier this month.

The Treasury and Finance Ministry late Tuesday announced the action plan with a timeline and detailed measures within the package unveiled by President Recep Tayyip Erdoğan. All measures under the plan will be implemented by March 2023.

The president outlined a series of measures that he said would lift the country’s economy as he vowed to prioritize the fight against the rise in consumer prices with the aim of bringing inflation back down to single digits.

According to the action plan, the price stability committee will be set up as of June 30. The early warning system for preventing price fluctuations due to climate, diseases and harvest issues will be launched as of Sept. 30. Food loss and waste are also to be reduced under the plan.

The country’s annual inflation reached 15.61% in February, its highest since mid-2019, pressuring the Central Bank of the Republic of Turkey (CBRT) to raise what is already the highest policy rate in any big economy.

The bank last week hiked its benchmark policy rate by 200 basis points to 19%, twice the market forecast in what it called a “front-loaded” move to head off rising inflation.

Two days after the sharp hike, Naci Ağbal was replaced by Şahap Kavcıoğlu as the new chief of the central bank. The bank tightened the policy rate by 875 basis points since Erdoğan appointed Ağbal as CBRT governor in November.

In his first remarks, Kavcıoğlu vowed to continue to use monetary policy tools effectively to achieve a permanent decline in inflation.

Treasury and Finance Minister Lütfi Elvan has said the price stability committee would complement and strengthen the hand of the central bank’s monetary policy.

Public-private cooperation framework law will be enacted and reforms for public economic enterprises will be introduced.

The asset quality of the banking sector will be improved and the capacity of asset management companies will be strengthened as part of the plan.

The country will empower the non-interest financial system and corporate structure of the financial sector.

The Health Industries Presidency will be founded to develop a competitive, innovative and strong health industry in the country as of December 2021.

The country will also establish a Software and Hardware Industries Presidency for boosting domestic capabilities in newly-emerging technologies, encouraging youth employment and gaining global competitive power as of December 2021.

Turkey will form a precious minerals and stones market in line with international standards. The country will support green transition in the industry and increase the competitiveness of its exports.

Employment incentives will be revised, employment financing convenience will be provided. Also, steps for increasing youth employment and improving the quality of the labor force will be taken.

New generation working methods will be popularized and labor force transition to future jobs will be accelerated.

The Financial Stability Committee will be established in June 2021 to deepen markets and increase savings.

The country will also form the Economic Coordination Committee in June. The committee will be chaired by Turkey’s vice president and ensure coordination and success of the country’s Medium Term Program, Annual Program and Development Plan. Institutional structures will be strengthened.

A law to protect the private sector investments will be enacted and the state supports and incentive investment system will be reformed.

The country will take steps to ease domestic trade and prevent unfair activities in the retail trade to provide a well-functioning and fair supply chain.

Amendments will be made in cooperatives to ensure a more transparent, effective and professional management structure.

A bill will be prepared to regulate digital markets and ensure healthy competition.

Measures will be taken to prevent the restriction of the competition or the misuse of data stored on the digital platforms as well as to maintain a competitive and fair environment in digital markets.

The Independent Market Surveillance Institution will be formed for consolidating different mechanisms in the market.

The institution will prevent the supply of products that do not meet the minimum safety conditions for human health, life and property safety, animal and plant health, the environment and consumers.