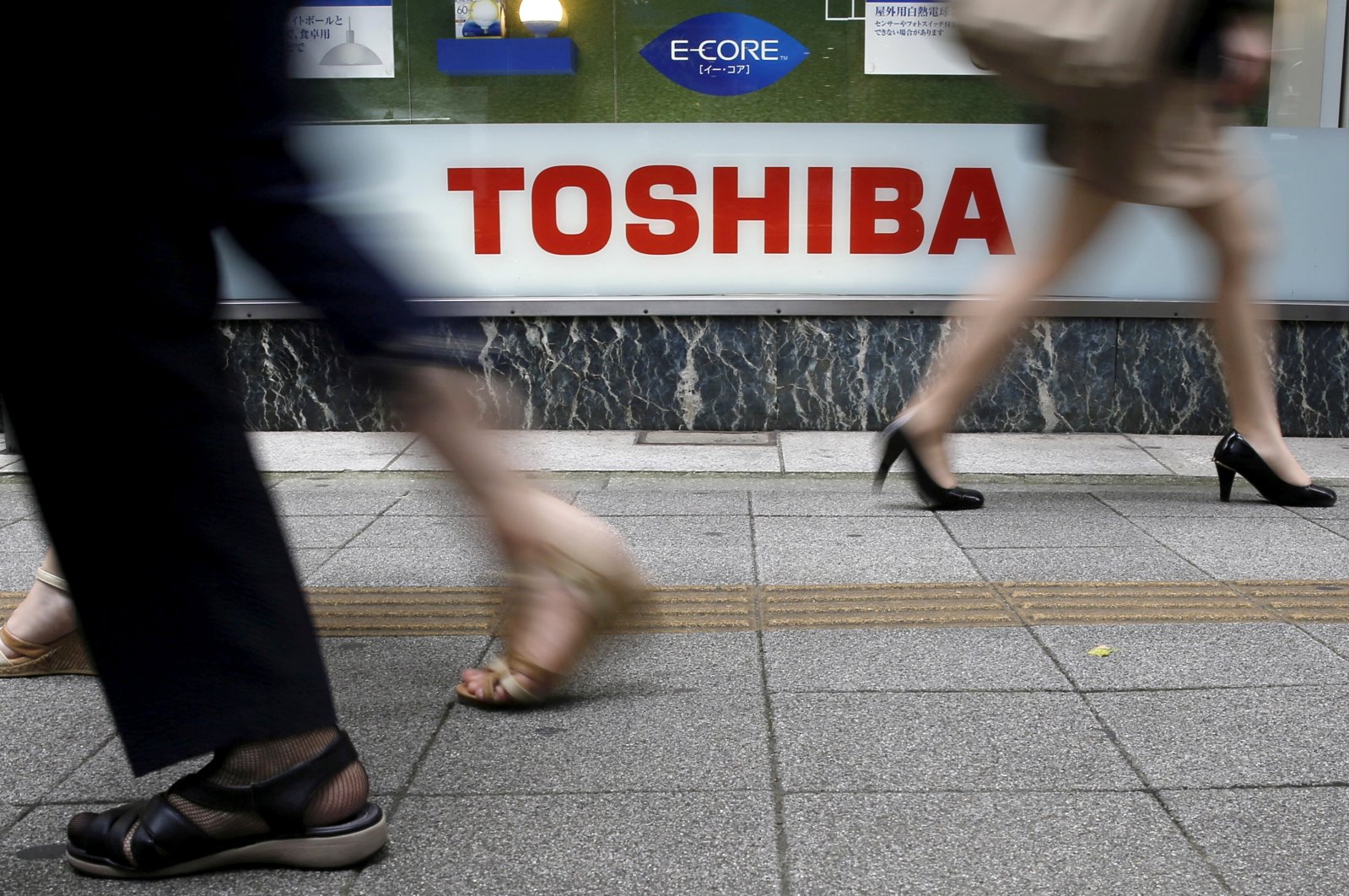 Electronics giant Toshiba, long struggling over scandals and financial losses, announced Friday that it will split into three companies after investors pressured the Japanese company to boost its shares.

The board approved a plan that will spin two companies off from the rest of Toshiba's operations within two years, with one focused on infrastructure and the second on devices, with both eventually being listed.

The firm said the decision would allow each business to "significantly increase its focus and facilitate more agile decision-making and leaner cost structures."

That would leave them "much better positioned to capitalize on their distinct market positions, priorities and growth drivers to deliver sustainable profitable growth and enhanced shareholder value," it added.

The decision, reported in Japanese media earlier this week, followed calls by activist investors who wanted "moves to shake the company up and get investors to reevaluate it and hopefully get a higher share price", said LightStream Research analyst Mio Kato, who publishes on Smartkarma.

The decision caps a period of tumult at the firm, once a symbol of Japan's advanced technological and economic power.

In June, shareholders voted to oust the board's chairman after a series of scandals and losses, in a rare victory for activist investors in corporate Japan.

The move followed the damaging revelations of an independent probe that concluded Toshiba attempted to block shareholders from exercising their proposal and voting rights.

It also detailed how the firm had pursued an intervention from Japan's Ministry of Economy, Trade and Industry to help sway a board vote.

And in April an unexpected buyout offer from a private equity fund associated with then-CEO Nobuaki Kurumatani stirred uproar, with allegations it was intended to blunt the influence of activist investors.

Other offers emerged subsequently, and Kurumatani resigned in April, though he insisted it was not related to the buyout controversy.

Investors 'not willing to wait'

Hideki Yasuda, an analyst with Ace Research Institute, said it would take time to assess the consequences of the split.

"Corporate value is maximized by individual segments working on their own, so the plan is a good one if you look at that aspect of it," he told Agence France-Presse (AFP).

"Another way to look at it is that the three entities, which had organic business coordination, will be divided ... It's conceivable that in reality their efficiency might decline as a whole," he said.

The move risks failing to address issues facing Toshiba including governance reform, said Kato, with management focused on responding to investor pressure instead.

"I think you still need probably another three, four years to really put Toshiba where it should be, but I don't think they're willing to wait," he said.

Toshiba said the move was the first-ever spin-off scheme for a Japanese company of its size, and Yasuda said it would be closely watched in the country, with its success or failure likely to influence others.

"If it ends well, I think shareholder pressure may increase for other conglomerates to take similar steps. But if it fails, then business managers may feel that being conglomerates reduces risks."

The industrial giant dates back to 1875 when its forerunner, a telegraph factory, operated in central Tokyo. During Japan's tech boom of the 1980s, it developed into a vast conglomerate with businesses ranging from chip manufacturing equipment and escalators to storage devices and nuclear plants.

2015: Profit-padding scandal – Toshiba withdraws its earnings forecast in May, citing accounting problems on several infrastructure projects. An external panel finds that high-level Toshiba staff were involved in "systematically" inflating profits by $1.2 billion between 2008 and 2014, pressuring underlings to cover up weak results. The company president and other top executives resign over the ballooning scandal, as shares tank and thousands of jobs are cut.

2016: Asset sell-offs – The scandal hits Toshiba at a weak point after the 2008 financial crisis and 2011 Fukushima nuclear disaster, which dealt a blow to its key atomic power division. In a scramble to recover, the company sheds businesses including its medical devices unit, which Canon buys for nearly $6 billion. Despite this, it suffers a record net loss of around $4.4 billion for the 2015/16 financial year.

2017: Westinghouse goes bust – Toshiba's United.States nuclear subsidiary Westinghouse Electric, whose tech is used in around half the world's atomic reactors, goes bankrupt, largely owing to delays and cost overruns. Strapped for cash, Toshiba is forced to try to sell part of the family silver – its memory chip business, which accounts for around a quarter of annual revenue. The conglomerate posts a net loss of $8.8 billion in 2016/17 as it faces the humiliating threat of being delisted from the Tokyo Stock Exchange (TSE). It raises $5.3 billion in new capital with foreign activist investors rushing in, but is demoted to the TSE's second section.

2018: Mega-sale of Toshiba Memory – After months of complications, the $21-billion sale of prized chip unit Toshiba Memory to a group led by U.S. investor Bain Capital is completed. Toshiba retains a 40% stake in the chip business, which is renamed Kioxia. The deal is seen as crucial to keeping Toshiba afloat, even as the firm says it has bounced back into the black and avoided delisting by ceding assets and debts related to Westinghouse.

2019-2020: Shareholder pressure – Toshiba works on its financial woes and strengthens its governance, with a board composed of mostly external directors. But the group faces pressure from activist shareholders who want to see faster growth and a clearer long-term strategy. The crisis comes to a head after its 2020 annual general meeting, as some shareholders call for an independent inquiry into vote irregularities – a demand refused by company management.

April 2021: Surprise buyout offer – Having won a return to the TSE's first section, Toshiba says it has received a takeover offer from private equity fund CVC Capital Partners. The offer, reportedly in excess of $20 billion, stirs tumult within the firm around allegations it is intended to blunt the influence of activist investors. In a shock move, Toshiba's president Nobuaki Kurumatani, who previously worked for CVC, resigns – although he insists his decision is not related to the buyout controversy.