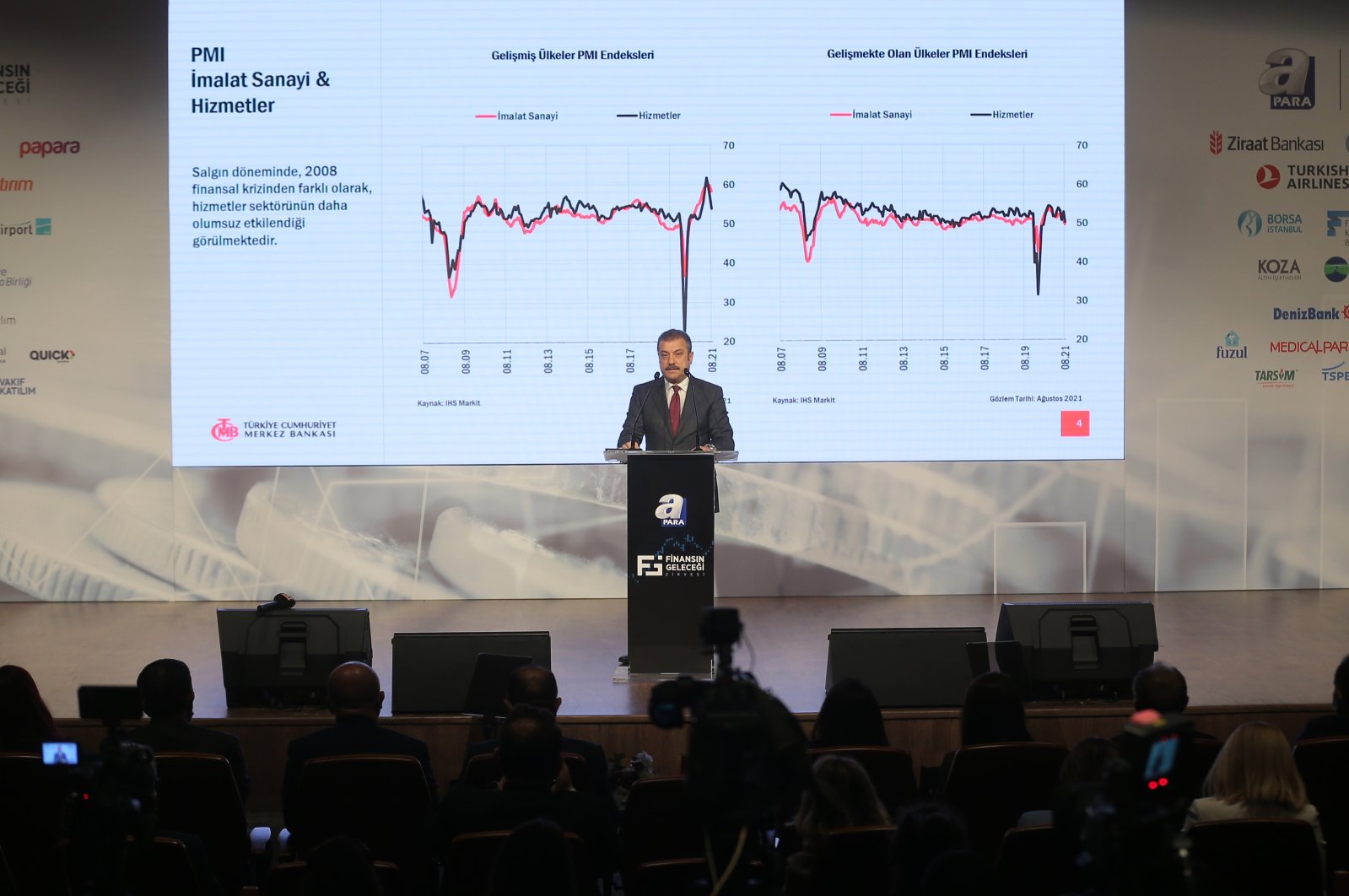 The Central Bank of the Republic of Turkey (CBRT) Governor Şahap Kavcıoğlu speaks during the Future of Finance Summit, organized by the Daily Sabah’s parent company Turkuvaz and its broadcaster A Para, in Istanbul, Turkey, Sept. 28, 2021. (AA Photo)
by DAILY SABAH WITH AGENCIES Sep 28, 2021 4:18 pm
RECOMMENDED

The governor of the Turkish central bank on Tuesday said he expects pricing behavior to return to normal as the effects of the coronavirus pandemic ease, adding that the bank will continue to take necessary policy steps to support normalization.

Speaking at the Future of Finance Summit, organized by the Daily Sabah’s parent company Turkuvaz and its broadcaster A Para, Şahap Kavcıoğlu said global food prices have displayed sharp rises and that continued drought and production conditions were impacting prices negatively.

Turkey is among the countries with the highest surge in food prices, which Kavcıoğlu said would decline with normalization of demand composition, easing of supply restrictions and decoupling of base effects.

“These elements will also have a downward effect on inflation in our country in the coming period,” the governor added.

Turkey’s annual consumer price inflation accelerated to 19.25% in August, above the Central Bank of the Republic of Turkey’s (CBRT) policy rate and its highest level in more than two years.

Kavcıoğlu said the gap between consumer and producer inflation was not specific to Turkey alone, stressing it recently increased significantly above the long-term average in many developed and developing countries.

The governor attributed to some extent the recent soaring prices of certain goods to the pandemic as well as an increase in commodity prices and disruptions in supply chains. Yet, he said, “we are seeing higher price increases especially in sectors that have been negatively affected by the pandemic and where demand has been buoyant.”

“However, we assess that these emerging pricing behaviors will converge to their pre-pandemic state again in the coming period as economic and social normalization gains momentum,” he noted.

Turkey this week launched an investigation into the country’s five biggest supermarket chains after they were blamed for the soaring prices in the country.

Trade Minister Mehmet Muş ordered officials to inspect the prices of a vast array of goods, from eggs, milk and vegetables to cleaning supplies at the five grocery chains, a statement by the ministry said Saturday.

President Recep Tayyip Erdoğan earlier vowed Turkey would get surging prices under control as quickly as possible and pledged the government would prevent “unreasonable” price hikes.

The one-week policy rate was widely expected to be held steady at 19%, where it had been since March, given increasing inflation. It marked Turkey’s first monetary easing since May 2020 and ending a tightening cycle that began 12 months ago.

A day before, Kavcıoğlu told the T24 online newspaper it was difficult for monetary policy to have an effect on food price inflation, and cited the needs of the real sector when asked about last week's rate cut.

The governor also said the reason for most of the depreciation in the Turkish lira in September was statements by the U.S. Federal Reserve (Fed), adding there is no basis for the currency to rapidly decline further.

The lira dropped to a record low of 8.8995 per dollar on Friday, a day after the bank delivered the rate cut.

Kavcioğlu reiterated that there was no basis for the lira to depreciate rapidly against the dollar, citing a reduction in the current account deficit and a rise in lira deposits.

“You will limit the budget deficit, minimize the current account deficit. We can reduce interest by tackling these two gaps,” Gül said.

He also stated loan volumes could not be increased randomly without establishing a healthy loan mechanism.

“We have to be selective. In particular, we need to do this by financing trade, industry in a good way, and, if necessary, by making consumer loans a little more expensive.”