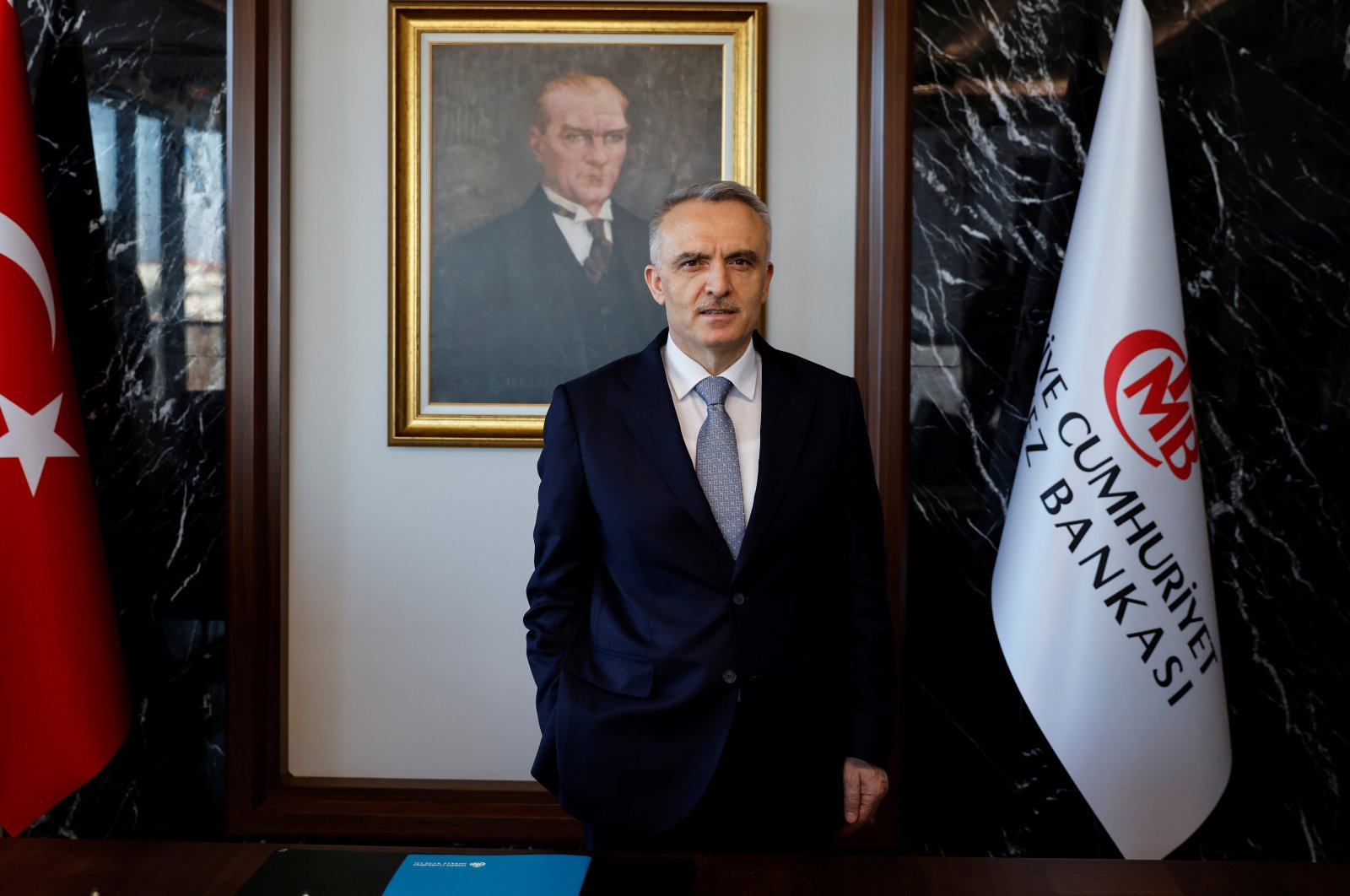 Central Bank of the Republic of Turkey (CBRT) Governor Naci Ağbal poses during an interview in his office in Istanbul, Turkey, Feb. 4, 2021. (Reuters Photo)
by DAILY SABAH Feb 09, 2021 1:00 pm
RECOMMENDED

Turkey’s central bank looks to increase its reserves via auctions and through the reversal of dollarization trends in deposit and participation funds, its governor said Tuesday.

“We will increase our reserves through auctions, de-dollarization in domestic settlements as well as stable/strong capital inflows,” Naci Ağbal said in a meeting with economists in Istanbul.

“When the conditions are mature enough, we will share our plan for this with the public in an open and transparent manner,” Ağbal said.

He stressed that the accumulation process would be initiated, provided that it does not affect the exchange rate level.

Ağbal last week said the Central Bank of the Republic of Turkey (CBRT) would patiently rebuild its FX reserves and has called off a hunt for foreign swap lines that saw it reach out to Washington D.C., London, Tokyo and other capitals last year.

He said there were signs that Turks are shifting toward lira assets, suggesting a reversal in dollarization may come.

Citizens have been holding a record of around $236 billion (TL 1.67 trillion) in hard currencies.

In addition, the governor said the central bank’s most important and indispensable task is to ensure permanent price stability, vowing that the bank would implement all decisions prioritizing price stability.

“Price stability is the basis of financial and macroeconomic stability,” he said.

He underlined that the CBRT would maintain its tight monetary stance until the 5% inflation target is achieved by 2023.

His remarks come as the annual inflation rate climbed more than expected to 14.97% in January, keeping the pressure on the bank to maintain a tight policy even after sharp rate hikes.

Ağbal on Friday vowed that interest rates were unlikely to be cut for a “long time.”

“It does not seem possible to put interest rate cuts on the agenda for a long time this year,” he told Reuters in his first interview since taking the job in early November, adding that they could also be raised again if necessary.

Since Ağbal took office, the CBRT has raised rates to 17% from 10.25% to battle inflation, giving Turkey the tightest monetary policy of any major developed or emerging market economy.

Ağbal on Tuesday emphasized that tight monetary policy and tightening in financial conditions will lead to a moderate level of economic activity through the demand channel.

“The predictability and tight stance will contribute to a downward trend in inflation, a decline in the country’s risk premium, encouragement of savings in Turkish lira, reverse currency substitution trends, a boost in foreign exchange reserves, and a permanent decline in financing costs,” Ağbal added.

Consumer prices are expected to edge higher for a few months before slowly declining to the bank’s forecast of 9.4% by year-end.

The bank predicts it will take until the end of 2023 for inflation to hit a 5% official target for the first time since 2011.

The CBRT chief said the Turkish economy is expected to have grown by 7% to 8% in the last quarter of 2020.

This could bring the overall growth throughout the pandemic-ravaged year to around 2.5%, he added.

Turkey’s gross domestic product (GDP) saw a strong rebound in the second half of 2020, soaring to a more-than-expected 6.7% growth rate in the third quarter.

Turkey and China are estimated to have been the sole countries among G-20 members to have ended 2020 with positive growth as nations struggled to contain the COVID-19 pandemic. Chinese GDP grew 2.3% in 2020.

Ağbal also shared his growth forecast for the first quarter of 2021, saying the economy could grow up to 5% in the January-March period.

“The first quarter could be started with a 4%-5% growth, given the economic activity in January and February,” the governor noted.