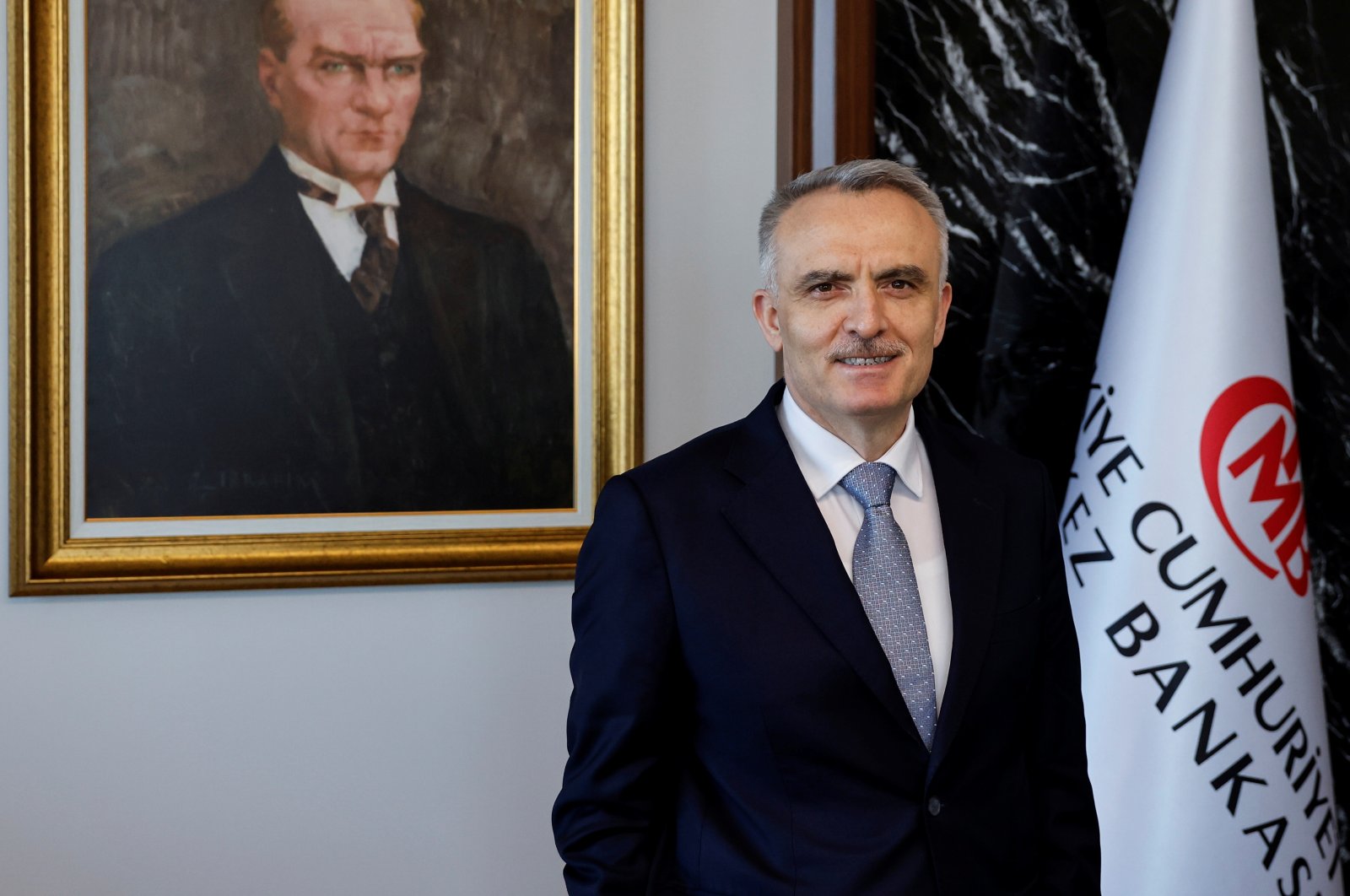 Central Bank of the Republic of Turkey (CBRT) Governor Naci Ağbal poses during an interview in his office in Istanbul, Turkey, Feb. 4, 2021. (Reuters Photo)
by Daily Sabah with Reuters Feb 05, 2021 2:54 pm
RECOMMENDED

Turkey’s central bank does not expect to begin considering cutting interest rates until much later this year, given upward pressure on already high inflation, its new governor said.

Rate hikes are also still a possibility, Ağbal told Reuters in his first interview since taking the reins of the Central Bank of the Republic of Turkey (CBRT) in November.

He said the central bank intends to move ahead of the market, including swiftly hiking rates if there is any sign that inflation might drift higher than expected.

His remarks come as the annual inflation rate climbed more than expected to 14.97% in January, keeping the pressure on the bank to maintain a tight policy even after sharp rate hikes.

Ağbal’s comments, including the revelation that Turkey is no longer seeking currency swap lines with foreign counterparts, reinforced a growing view among investors that the bank is in no rush to start easing policy.

“It does not seem possible to put interest rate cuts on the agenda for a long time this year,” Ağbal said, noting that consumer prices are set to edge higher for a few months before slowly declining to the bank’s forecast of 9.4% by year-end.

“If any new data that we come across indicates a risk of deviating from the medium-term target path in inflation expectations and pricing behavior, we will tighten further in advance,” he said at the bank’s new headquarters in Istanbul.

The Turkish lira rallied nearly 1% in response on Friday to its strongest level since early August, while dollar bonds rose and volatility dipped in a signal of market confidence.

The lira has been leading the way among emerging market (EM) currencies and has cemented its position as the top-performing currency in the world this year.

“Turkish Lira is a stunning outlier in EM, rising far above any other EM currency so far in 2021,” tweeted Robin Brooks, the chief economist at the U.S.-based Institute of International Finance.

President Recep Tayyip Erdoğan also pledged a new market-friendly economic era. The central bank has since hiked rates to 17% from 10.25% to battle inflation that has been stuck in double-digits, giving Turkey the tightest monetary policy of any major developed or emerging market economy.

Ağbal has vowed a stronger approach to tackle inflation.

Investors have also begun edging back into Turkish assets, with some $15 billion (TL 106.01 billion) in foreign inflows since November driving the lira up 15% and dramatically cutting gauges of market risk.

“The interview was pretty clear about the outlook for rates, at least for the next 12 months,” said Kieran Curtis at Aberdeen Standard Investments.

“We have definitely seen some (investment) flows going back into Turkey in the weekly data and reserves are going up, so we are turning to a more positive scenario.”

Move ahead of markets

The five-year credit default swaps (CDS), a significant indicator of the risks pertaining to the country’s economy, on Friday dropped below 300 points at 292 points for the first time since March last year.

Yet concerns are said to be remaining over whether Ağbal can rebuild the bank’s FX reserves, seen as a country’s buffer against financial crises, which on a net basis fell last month to a quarter of their levels at the start of 2020.

“Worth using this opportunity to rebuild FX reserves & avoid Lira overshooting on the strong side. It goes without saying that we’re thrilled to see Lira strength,” IIF’s Brooks said.

Ağbal, a former finance minister, said past cycles – including in 2019, when rates came down from 24% after high volatility in the exchange rates – lay bare the economic costs of easing policy too early.

This time, he said, a “strong disinflationary bias” will guide the bank’s approach. It will manage expectations by “moving ahead of the markets,” he added.

“As the market confirms this determination of ours, inflation expectations” will dip, Ağbal told Reuters. “We expect capital inflows... to continue,” especially with longer-term portfolio investments, he added.

Ağbal said the bank would patiently rebuild its FX reserves using auctions and has called off a hunt for foreign swap lines that saw it reach out to Washington, London, Tokyo and other capitals last year.

“Our strategy to raise reserves does not include swap agreements with other countries’ central banks,” he said.

Phoenix Kalen at Societe Generale said abandoning the swaps plan was encouraging. “The recovery narrative in Turkish assets has been strengthened” by Ağbal’s policy comments, she told Reuters.

Most countries have slashed borrowing costs to soften the blow of the coronavirus pandemic. But in Turkey, the central bank has hiked by 675 basis points in three months and said it will do more if needed.

It predicts it will take until the end of 2023 for inflation to hit a 5% official target for the first time since 2011.

The sharply higher interest rates have pinched businesses and households at the same time that food inflation has soared more than 20%.

Citizens hold a record $236 billion in hard currencies to hedge against inflation and the lira.

Ağbal said the economy has lost some pace recently but signs that Turks are shifting toward lira assets suggest a reversal in dollarization may come.

A burst of state banks-driven lending led to a strong rebound in the second half of 2020 as the country’s gross domestic product (GDP) soared to a more-than-expected 6.7% growth rate in the third quarter.

“We are working day and night... to achieve lasting price stability,” Ağbal said. “We know we are in a difficult period.”

Erdoğan recently expressed his frustration with what he said were major differences in food prices and warned that tradespeople could face heavy fines if they keep charging unjustifiably high prices.

The president instructed officials to investigate increases in food prices, saying that the Turkish people should not be expected to endure high inflation and high interest rates.