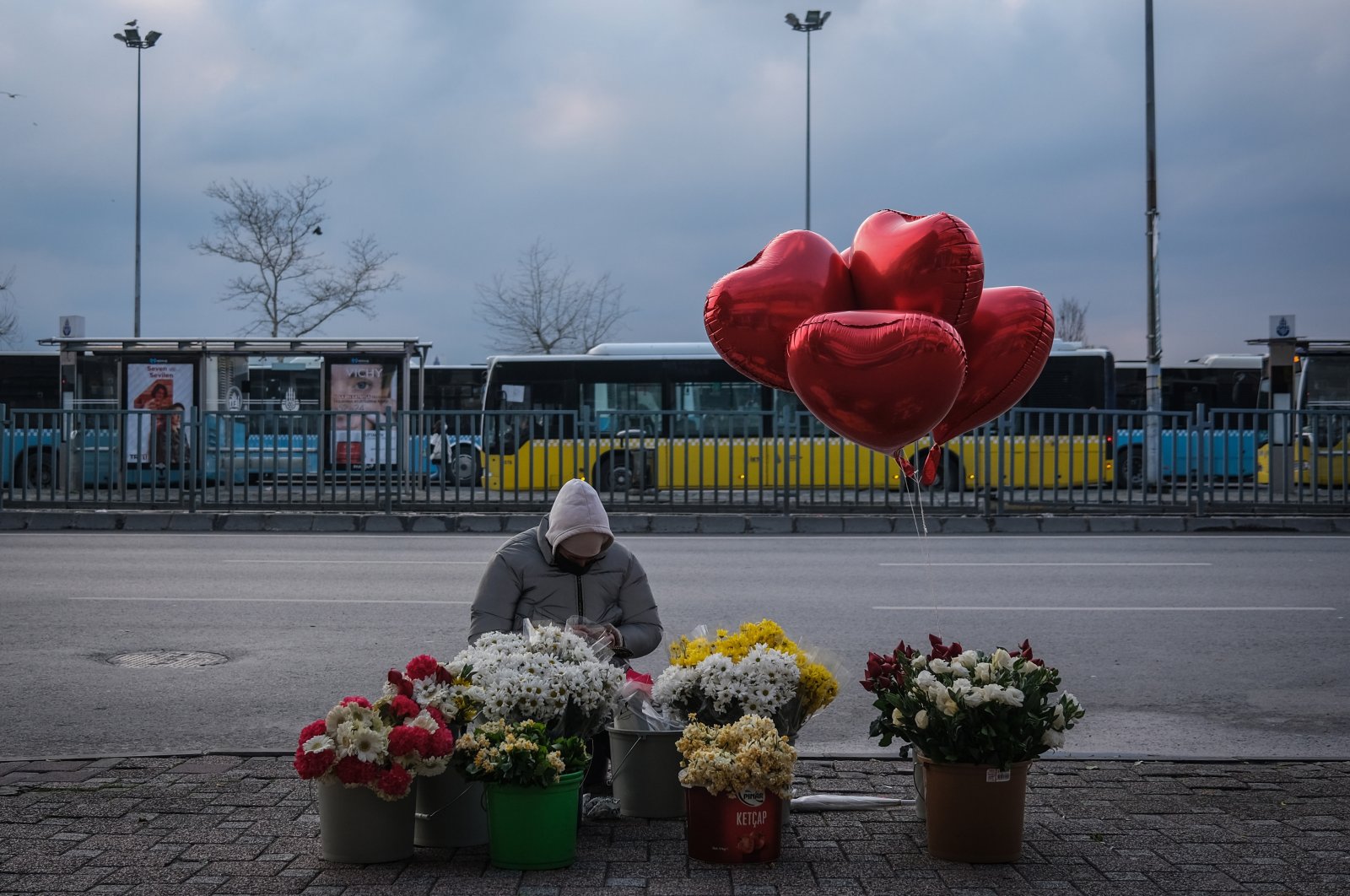 Having had to spend this year’s Valentine’s Day under a lockdown, Turks searched for ways to celebrate love amid much heartache and isolation as the coronavirus pandemic stretched past its first anniversary.

The day generally evokes the idea of dinner and is one of the busiest days of the year for many eateries that have been ravaged by shutdowns designed to slow the spread of the virus and most locals have chosen digital orders, resulting in records for online shopping.

Sales of many goods doubled as customers mostly went after smartphones, laptops, tablets, personal care products, electronics and home appliances and filled in hotels, according to sector representatives.

Total spending has been estimated to have reached as much as TL 15 billion ($2.1 billion), according to a report in Turkish Sabah daily.

Online shopping has seen as much as an 80% rise compared with last year, according to Association of E-Commerce Operators (ETID) Chairperson Emre Ekmekçi.

“We expect Valentine’s Day shopping to bring around a 25%-30% increase in e-commerce traffic and turnover growth,” Ekmekçi said. “In February, we expect the overall e-commerce volume to reach TL 25 billion.”

“The PlayStation 5 that we put up for sale over mediamarkt.com on Feb.4 sold out in just 15 minutes,” Gökyıldırım noted. He also noted the skyrocketing increase in iPhone sales.

One of the leading e-commerce platforms in Turkey, GittiGidiyor has seen an over 70% year-on-year increase in sales, its Marketing Director Feyza Dereli Fedar said.

Fedar also reported that laptops, tablets, smartphones, home decoration goods, cameras and musical instruments were among the goods sold the most.

The home decoration category has seen a 43% year-on-year increase, she noted, adding that computer sales were up threefold and smartphones surged 82%.

As restaurants and cafes remained shuttered this year, locals booked hotels so they could access restaurants unavailable for reservations from outside the facilities.

Restaurants and cafes are limited to serving takeout only.

“Nearby hotels such as Sapanca, Şile and Ağva stand out in Istanbul. There is also demand for hotels that are open in Antalya. Two-to-three-day packages have been mostly preferred,” Gökçe noted.

Radtke also noted that foreigners have shown interest in Turkish hotels for Feb. 14, adding that they received bookings from Russia and the U.S. for the week.

“This weekend is both the last week of the semester break and Valentine’s Day. Hotels were 80%-90% full. Now this figure has reached 100%,” said Kayseri Erciyes Das 3917 Hotel General Manager Bora Kanber.

“We are working with a maximum capacity of 70% to ensure social distancing, and all our capacity for the weekend is up. We had to turn down new booking requests. There is a near 20% increase in demand compared with last week,” Tezcan noted.

As is the case each year, jewelry has been among the sectors coming to the fore this year.

“Purchases shifted online. Interest in perfume has been high as well as in diamonds ... The average amount of shopping per consumer has been TL 4,500,” Güzeliş noted.

United Brands Association of Turkey (BMD) Head Sinan Öncel emphasized gifts were estimated to bring as much as a 25% increase in sale turnovers.

“But I expect the actual increase to be in electronics, jewelry and cosmetics,” Öncel noted.

“The turnover has been estimated to reach TL 15 billion this year,” Palandöken noted, stressing the importance of mobility despite the restrictions.