US, Canada criticize China over sanctions in Uyghur row 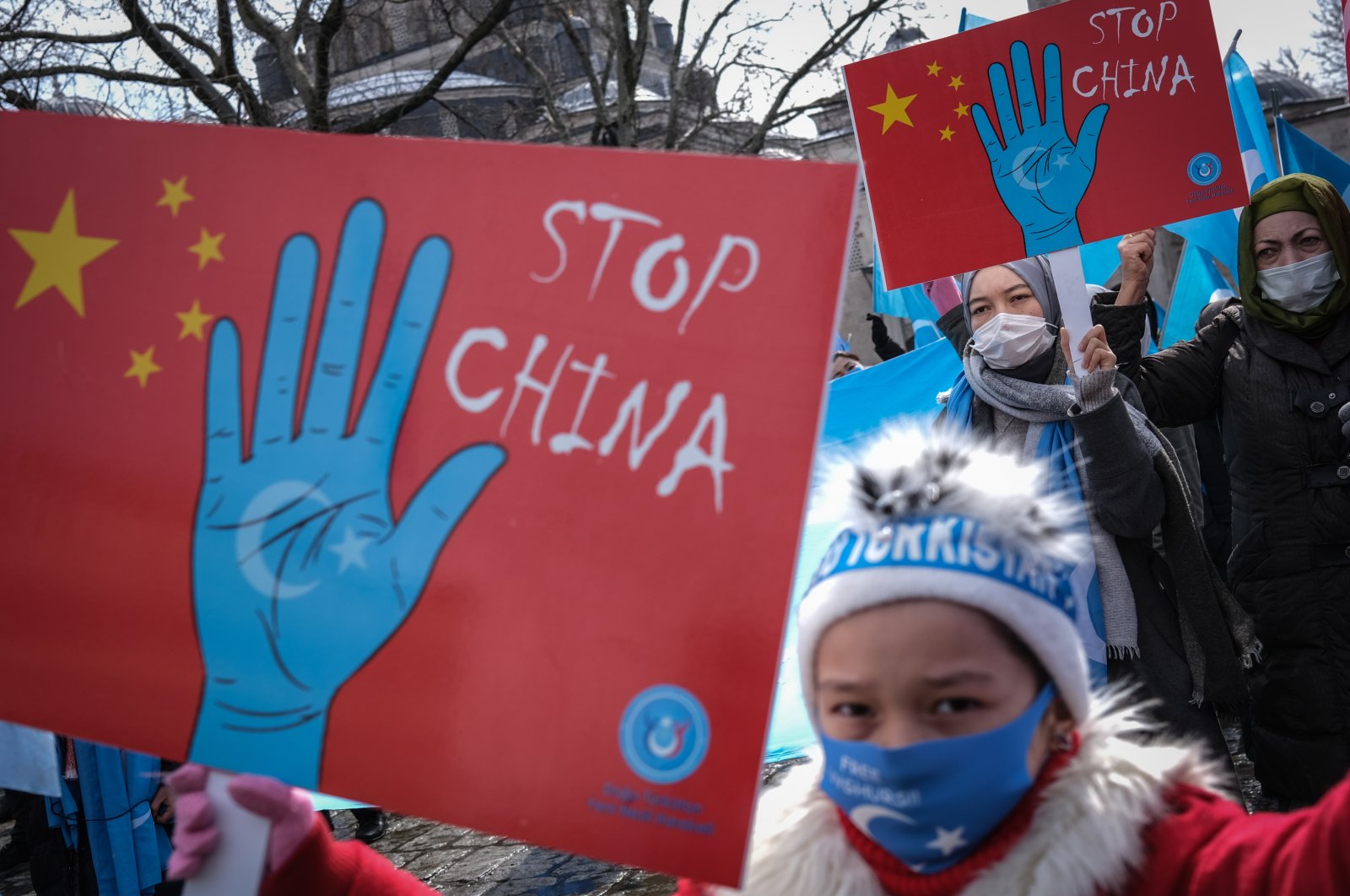 Uyghur protestors who have not heard from their families living in Xinjiang hold placards and Uyghur flags during a protest against China, in Istanbul, Turkey, March 25, 2021. (EPA Photo)
by ASSOCIATED PRESS Mar 28, 2021 12:31 pm
RECOMMENDED

China announced new sanctions against U.S. and Canadian officials in a growing political and economic feud over its policies in the Muslim-Turkic Uyghur region of Xinjiang, also known as East Turkistan.

A statement from the Chinese Foreign Ministry Saturday said the head of the U.S. Commission on International Religious Freedom, Gayle Manchin, will be barred from visiting mainland China, Hong Kong or Macao and from having any dealings with Chinese financial entities.

The commission's vice chair, Tony Perkins, was also included on the sanctions list, along with Canadian Member of Parliament Michael Chong and the body’s Subcommittee on International Human Rights.

China has strongly rejected accusations of human rights abuses in Xinjiang and has launched calls for boycotts and other punishments against foreign firms including retailer H&M and Nike, along with sanctions against foreign government officials and activists whom it says are spreading false information about its policies toward Uyghurs and members of other Muslim minority groups in Xinjiang.

“They must stop political manipulation on Xinjiang-related issues, stop interfering in China’s internal affairs in any form and refrain from going further down the wrong path. Otherwise, they will get their fingers burnt," the Foreign Ministry statement said.

China announced sanctions Friday against British officials and H&M products were dropped from Chinese websites over their opposition to buying cotton from Xinjiang. The ruling Communist Party’s Youth League launched attacks on H&M following the European Union’s decision to join the United States, Britain and Canada in imposing sanctions on Chinese officials blamed for abuses in Xinjiang.

More than 1 million members of the Uyghur and other predominantly Muslim ethnic minorities have been confined to detention camps in Xinjiang, according to foreign governments and researchers. Authorities there are accused of imposing forced labor and coercive birth control measures.

The Chinese government rejects complaints of abuses and says the camps are for job training to support economic development and combat so-called “Islamic radicalism.”

"Beijing’s attempts to intimidate and silence those speaking out for human rights and fundamental freedoms only contribute to the growing international scrutiny of the ongoing genocide and crimes against humanity in Xinjiang," he said.

“We stand in solidarity with Canada, the U.K., the EU and other partners and allies around the world in calling on the PRC (People's Republic of China) to end the human rights violations and abuses against predominantly Muslim Uyghurs and members of other ethnic and religious minority groups in Xinjiang and to release those arbitrarily detained," Blinken said in a statement.

Canadian Prime Minister Justin Trudeau said China’s decision to sanction an opposition Conservative lawmaker as well as a parliamentary subcommittee is an attack on freedom of speech regarding human rights abuses in Xinjiang.

“China’s sanctions are an attack on transparency and freedom of expression – values at the heart of our democracy, ″ Trudeau said on Twitter.

Michael Chong, the opposition Conservative foreign affairs critic who has been sanctioned, said he has a duty to call out China’s "genocide″ of Uyghur Muslims.

"We who live freely in democracies under the rule of law must speak for the voiceless, ″ Chong said on Twitter. "If that means China sanctions me, I’ll wear it as a badge of honor."