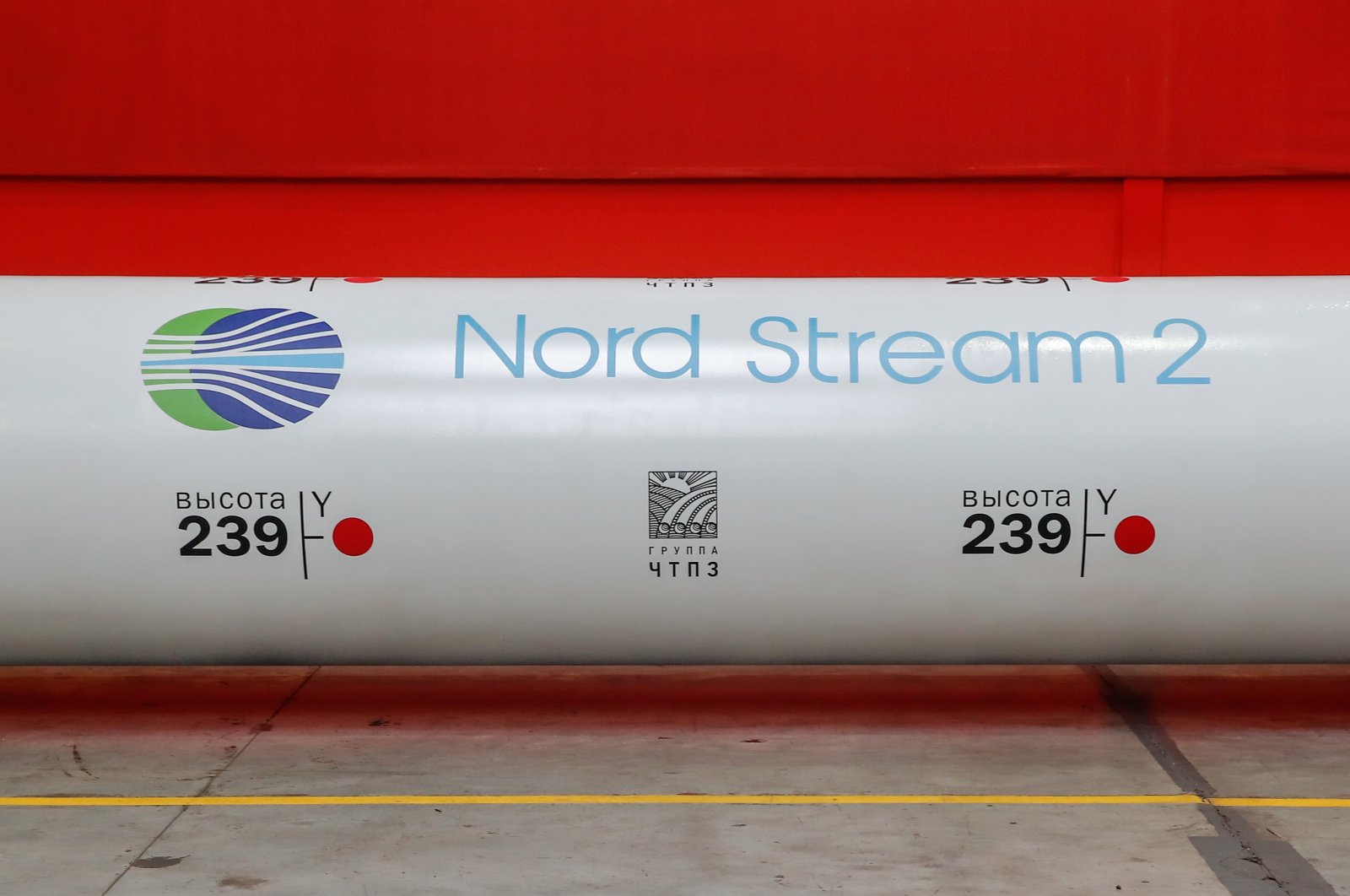 The logo of the Nord Stream 2 gas pipeline project is seen on a large diameter pipe at Chelyabinsk Pipe Rolling Plant owned by ChelPipe Group in Chelyabinsk, Russia, Feb. 26, 2020. (Reuters Photo)
by REUTERS Oct 15, 2021 9:39 am
RECOMMENDED

Europe’s most controversial energy project, the Nord Stream 2 pipeline has been completed and is ready to pump Russian gas to the continent. But nothing is flowing yet because it is still awaiting clearance from Germany's energy regulator.

The project, which is led by Russian gas giant Gazprom, has faced resistance from the United States and Ukraine among others.

A move by the German regulator last week to ask the pipeline operator, Swiss-based Nord Stream 2 AG, for assurances it will not break competition rules suggests it could take several more months before the 1,200-kilometer (745-mile) pipeline gets the green light.

Germany's Federal Network Agency – which regulates the country's electricity, gas, telecommunications, post and railway sectors – has until early January to come up with a recommendation on whether or not it will certify the pipeline that runs from Russia to Germany under the Baltic Sea.

While technical requirements have been met, the key sticking point is whether Gazprom will comply with European unbundling rules that require pipeline owners to be different from suppliers of gas flowing in them to ensure fair competition.

The Nord Stream 2 operator claims the rules are aimed at torpedoing the pipeline and last week scored a partial victory when an advisor to the European Union's top court recommended that Gazprom could challenge the EU rules.

The project's identically-sized sister pipeline, Nord Stream 1, has been exempt from unbundling rules since opening in 2011 because it was treated as an interconnector rather than as direct supplier.

What happens after the recommendation?

Once a three-member independent ruling committee at the network agency has made its recommendation it goes to the European Commission, which has another two months to respond.

If both bodies are in agreement that the pipeline fulfills all regulatory requirements then certification can be issued relatively quickly, but if they aren't the process could be further delayed.

Certification can be only given if both have worked out any differences that may arise, which means that it could take until spring 2022 before the pipeline gets certified and can officially start operation.

Can the agency really block the pipeline?

Effectively, no. Even though certification is a requirement the network agency is quite limited in how it can prevent Gazprom from simply starting to pump gas right away.

Its toughest tool is a one-time 1 million euro ($1.2 million) fine on the operator if it starts operation without certification.

As a regulator it can also launch an investigation but any legal process is expected to be lengthy and will not result in a short-term prevention of gas flows.

Gazprom, meanwhile, said in August it expects Nord Stream 2 to deliver 5.6 billion cubic meters (bcm), about a tenth of the pipeline's annual capacity, already in 2021 if supplies start in October.

German Chancellor Angela Merkel, in recent months, has made it clear to Russian President Vladimir Putin that playing by the rules was vital in ensuring ongoing political support for the pipeline, two government sources familiar with the matter have said.

Merkel openly said that the political basis for operating Nord Stream 2 was Russia's commitment to continue to use Ukraine as a gas transit route in the future as well.

"Putin is smart enough to know that the sentiment among German politicians regarding the project will become rather problematic, so he should not provide any reason to endanger operations," one of the sources said.

Is the network agency politically independent?

No. For its own recommendation the agency needs a binding assessment on supply security by Germany's Economy and Energy Ministry, of which it is a part.

"Certification can only be granted if the Federal Ministry for Economic Affairs and Energy determines that granting certification will not jeopardize the security of gas supply of the Federal Republic of Germany and the European Union," a spokesperson for the agency said.

The Economy Ministry has said it is currently working on this assessment, but has not given a timeline for when it will be completed. Should it determine that operating Nord Stream 2 will put gas supply at risk the agency cannot certify it.

Will Germany’s election have an impact?

Until a new government is in place, Germany's Economy Ministry is led by Peter Altmaier, a member of Merkel's conservative party, which has backed the pipeline.

Under Merkel, who is still running the country until a new coalition is formed, Germany recently struck a deal with Washington to allow the controversial pipeline to go ahead.

As a result, the threshold for the next government reversing the deal is very high, even in the likely event that the Greens – who have fiercely opposed the project – become part of the next ruling coalition, two people familiar with the matter said.

In addition, Olaf Scholz, who led the Social Democrats to victory in last month's election and stands a good chance to succeed Merkel as chancellor, has been in favor of the pipeline.