Ratifying Paris Agreement will not impose financial burden on Turkey 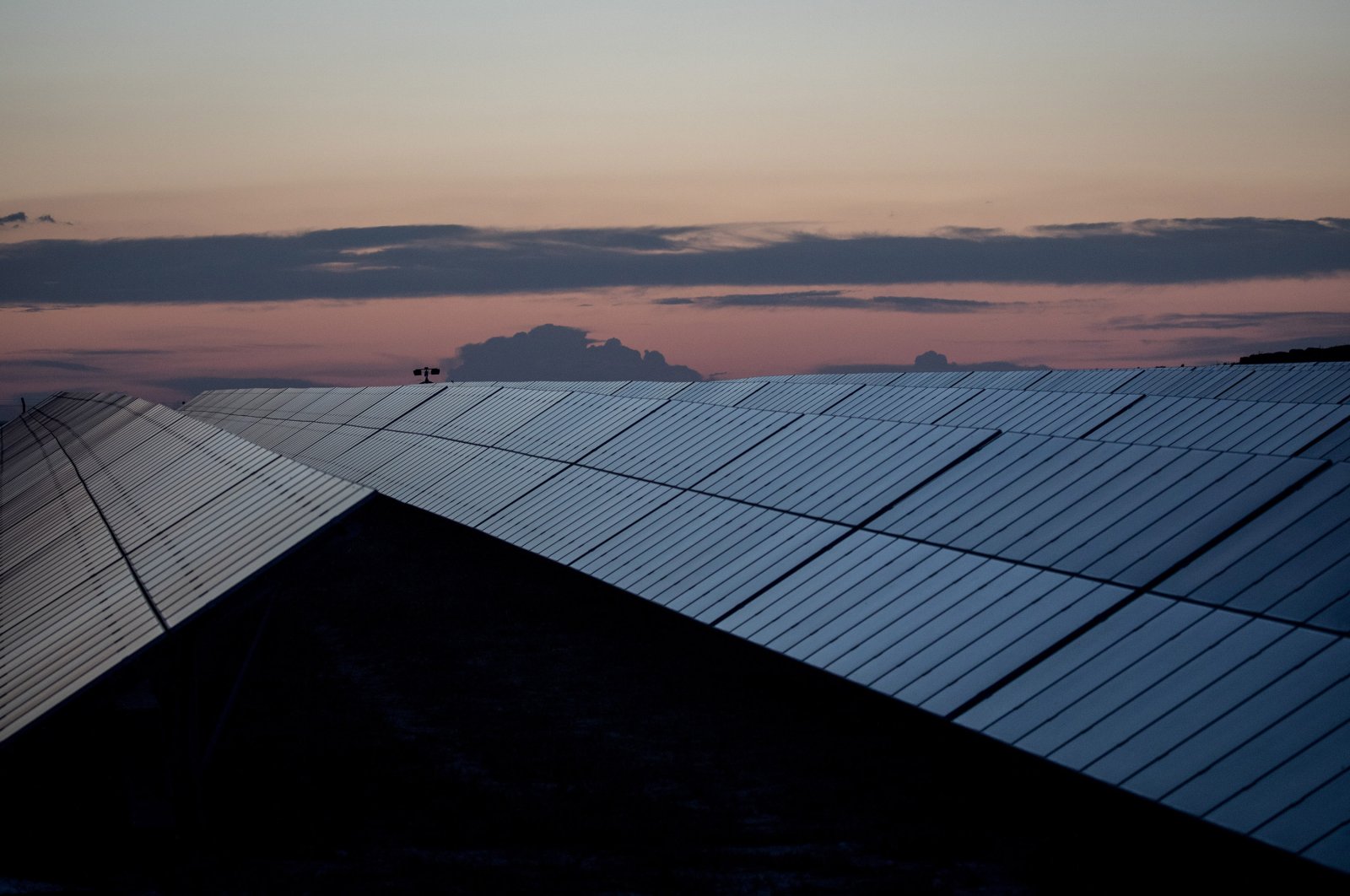 If Turkey chooses to ratify the Paris Agreement, the move will not impose new financial burdens on the country, said the U.K.'s Special Representative for Climate Change Nick Bridge on Monday, explaining that binding emission reductions and specific domestic policies will not be thrust upon Turkey.

Turkey has objected to its categorization in the Paris Agreement. Despite being one of the agreement's first signatories, Turkey is one of six countries and the only G-20 nation yet to ratify the pact.

Turkey, which has a target to reduce emissions by 21% by 2030, views its assigned classification as unfair and wishes to be placed in the "developing country" category, similar to China, one of the biggest emitters, as well as South Korea, Argentina, Brazil, Chile and Saudi Arabia.

Turkey, with its 21% emissions reduction target by 2030, views the categorization assigned to it as unfair and is seeking a category change to "developing country" similar to that of China, one of the biggest emitters, as well as South Korea, Argentina, Brazil, Chile and Saudi Arabia.

The Paris Agreement is a legally binding international treaty on climate change that was adopted in December 2015 and came into force in November 2016. It aims to limit global warming to well below 2 degrees Celsius (35.6 degrees Fahrenheit), preferably 1.5 degrees Celsius, compared to pre-industrial levels.

The agreement states that the nationally determined contributions (NDCs) of the countries party to the agreement need to reflect the highest ambition possible based on national circumstances.

A number of countries are expected to put forward their enhanced NDCs this year at the upcoming COP26, or the 26th United Nations Climate Change Conference scheduled to be held in Glasgow from Nov. 1 to 12 this year. According to Bridge, Turkey's status is a key point of discussion not solely at the COP26 meeting but in all conversations with Turkish officials.

"I have had excellent conversations with Turkish officials last week. It has been a great chance to discuss COP26. It's important that the UK and Turkey work closely ahead of the summit in November. In the conversations, I have been able to discuss our plans to put ambition at the heart of COP26 negotiations and campaigns. We discussed Turkey's status in the international process," Bridge told Anadolu Agency (AA) in an exclusive interview after his virtual meetings with the high-ranking representatives from the Foreign Affairs, Energy and Natural Resources, Environment and Treasury Ministries of Turkey.

Bridge said all parties would drive the COP26 negotiations with a consensus required to reach an agreement and ensure a successful outcome in Glasgow.

"As COP26 Presidency, the UK is committed to representing the interests of all Parties. We have to facilitate the negotiations and reach a balanced agreed outcome that accelerates climate ambition globally. That means we need to listen to all the concerns and issues of countries, including Turkey. My meetings have given me the opportunity to do that," he said.

Bridge, having been briefed on the country's progress in clean energy, energy efficiency, zero-waste and reforestation during meetings with Turkish officials, declared that Turkey is "absolutely a world leader in aspects of climate action."

"As COP26 President, we would welcome Turkish steps to ratify the Paris Agreement. But it is important that every country, not just Turkey, follows ratification with action," Bridge said, underlining the need to scale up action to tackle climate change.

He said ratifying the agreement would require a regular update of NDCs by Turkey showing how the country would contribute to efforts to limit the rise in global temperatures.

"Ratifying the Paris Agreement, however, would not in itself require new financial contributions from Turkey. Nor would it force Turkey to make specific binding emission reductions or implement specific domestic policies. That would be for Turkey to decide and we would want to work with Turkey to ensure these were realistic but ambitious," Bridge said.

He advocated for a transition to a low carbon economy, although he said that it would not come for free and the scale of the challenge would require countries to examine all sectors to achieve this.

He cited the example of the U.K. with its Green Industrial Revolution, a 10-point plan that sets out the approach the government will take to build back better, support green jobs and accelerate a path to net-zero by prioritizing renewables.

The plan announced by the U.K.'s Prime Minister Boris Johnson focuses on clean power technologies from offshore wind to low carbon hydrogen, the acceleration of zero-emission vehicles and the creation of 250,000 jobs by mobilizing £12 billion ($16.93 billion) of government investment along with private capital.

Raising mitigation ambitions, adaptation and finance are the top priorities on the COP26 agenda and to this end, he urged that all participants submit their NDCs to show how economies can grow and decarbonize simultaneously, Bridge said.

"Governments must set ambitious targets and policies. The COVID-19 crisis actually gives us the opportunity to rethink how our economies are structured and which sectors we want to base our recovery on. In line with the Paris Agreement, this year all countries are expected to put forward their enhanced nationally determined contributions and long-term net-zero development plans," he said.

He urged for rapid action towards achieving the 1.5-2 degrees Celsius temperature goals of the Paris Agreement given the fact that climate change is no longer a distant threat but a very current issue.

"That's why 2050 is critical. Science tells us that, by 2050, we need to transform our economies based on net-zero targets to limit warming to 1.5C and reduce the drastic effects of climate change. All sectors have a role to play in this transformation process. If we delay or do not prioritize action, climate change will have huge, irreversible impacts on nature, livelihoods and our economies," he underlined.

Over 100 countries have set or are considering net-zero emissions or neutrality targets but further action is needed.

According to the International Energy Agency, last year saw a record drop of around 6%, or 2 billion tons, in global emissions as a result of the slowing economic activity due to the COVID-19 but the emissions have started to rebound in December as the global economy recovers.

To keep global warming within the Paris Agreement limits, 1-2 billion tons of emission reductions are needed each year.

Bridge stressed that every country has a role to play in effectively tackling the global challenge of climate change, including Turkey.

"Turkey is an OECD member and G20 country. It is also a leading country in the region. Turkey has already made significant clean growth investments, particularly in renewable energy. But Turkey is also extremely vulnerable to the adverse impacts of climate change. It has to adapt and build climate resilience as quickly as possible," he warned.

Turkey's clean power capacity has seen speedy growth in the last few years. Renewables account for over half, or 51,000 megawatts, of the country's current installed power capacity with hydro, wind and solar leading respectively.

The country added a record 4,900 megawatts of clean power capacity in 2020 and plans to build 1,000 megawatts each in solar and wind capacity annually.

"To help maximize the impact of green investment and minimize the impacts of climate change, we need global action to be coordinated. That is where the Paris Agreement comes in. Ratifying the agreement on its own is not enough and there is lots of action already underway in Turkey. But the Paris Agreement is a key part of coordinated efforts globally to fight climate change.

"We are also already seeing the huge economic and social benefits of this collaboration. All countries will benefit from being involved in this global process," he said.

Focusing on the growth of green trade and the EU Green Deal with its aim of climate neutrality by 2050, Bridge said the U.K. and Turkey are in similar positions.

"We are both countries that have a large amount of trade with the EU. We must recognize the tremendous opportunities that the green economic transition will involve. The EU Green Deal is a crucial part of this," he noted.

The EU accounts for over 50% of Turkey's exports and the planned application of carbon equalization tax on borders as part of the deal will create financial costs estimated to reach €1.8 billion ($2.19 billion) annually for Turkish exporters, according to a recent study from the Turkish the Economic Policy Research Foundation of Turkey, Istanbul Policy Center and Economic Development Foundation.

The U.K. has been seeking to ensure it is set up to take advantage of the business and investment opportunities that the global response to climate change will bring, Bridge said, advising that Turkey do the same.

"Decarbonizing is also a great opportunity for Turkey. Greener industry would provide a significant contribution to mitigation and adaptation efforts in the country. But it would also open up substantial new investment," he said.

"Businesses are increasingly considering the climate impact of their decisions and looking to move to net zero. If Turkey keeps up with this, there are real opportunities that would further Turkey’s development. I see real potential for Turkey as a green manufacturing and industrial hub for Europe," Bridge concluded.