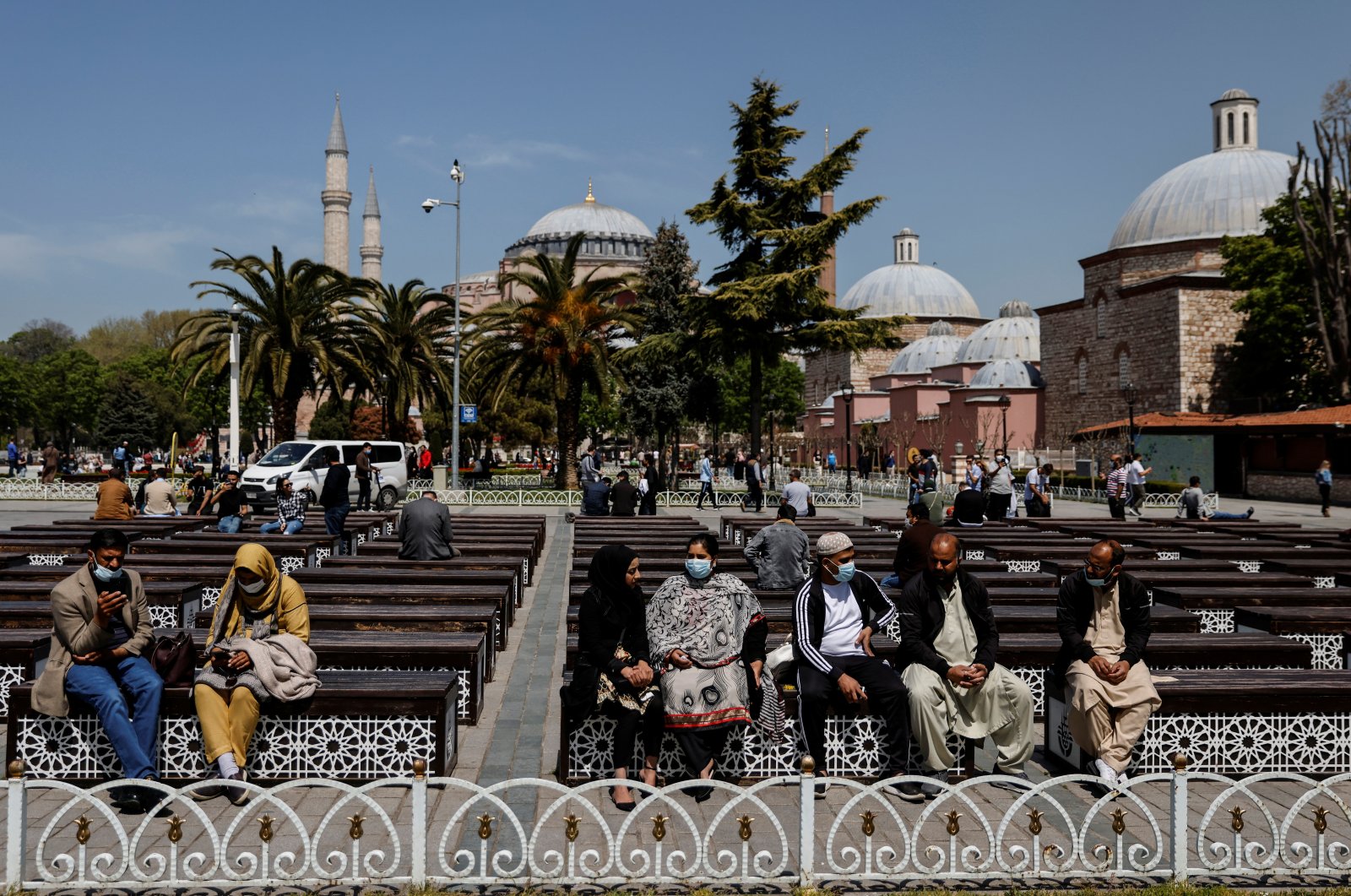 Tourists enjoy a sunny day outside the Hagia Sophia Grand Mosque during a nationwide "full closure" amid the spread of the coronavirus, in Istanbul, Turkey, April 30, 2021. (Reuters Photo)
by DAILY SABAH May 24, 2021 2:06 pm
RECOMMENDED

Foreign tourist arrivals in Turkey surged sharply in April from a year ago due to the so-called base effect, in a turnaround from the trickle of travelers due to the coronavirus pandemic.

Only 24,238 foreigners trickled in the same month of 2020, a month after Turkey began closing borders and restricting activity after it logged its first COVID-19 case.

April arrivals were down from a month earlier and only a quarter of the arrivals in 2019 before the pandemic hit, the data showed, suggesting the tourism season may get off to a tough start.

Last month, Istanbul, Turkey’s largest city by population, was the top draw for foreign visitors with a 53% share, attracting 419,686 foreigners.

It was followed by the Mediterranean resort city of Antalya and Edirne in northwestern Turkey, which borders both Bulgaria and Greece.

Some 2.7 million foreigners arrived in the January-April period, down 35.6% from a year ago.

Yet uncertainty over whether Moscow will allow its citizens to travel is causing concerns among the industry as well as tourists. The Russian government has denied reports that the ban had been extended until the end of June.

Some 2.1 million Russians came last year and 6 million in in the year before the pandemic.

Moscow’s decision to halt most flights is said to have blocked the plans of 500,000 tourists, who had hoped to visit during the April-June period.

Russia is expected to send a delegation to assess measures taken by Turkey to protect airports, hotels and other tourist locations from the coronavirus before deciding on when to lift its flight ban.

Officials have also said the calendar regarding air travel could be unveiled at the end of May.

“Safe tourism certification practice in resort areas is yielding better-than-expected results. I hope that the delegation from Russia will also have the opportunity to test, observe and experience the reports that we have presented to them with on-site examination, Ersoy told Sputnik.

“I think we will start flights again as soon as possible,” the minister said.

Ersoy said they would probably hold another meeting in the coming weeks and clarify the dates of their arrival of the Russian delegation.

“It is pleasing that the number of cases in Turkey continues to decline. Because Turkey did not immediately transition to normalization from full closure. It went into partial closure. This allows the numbers to go down, not up,” the minister noted.

The daily coronavirus cases plummeted to below 8,000 on Sunday from a record high of 63,082 a month ago.

Of the 2.1 million Russian tourists that arrived last year, some 417 turned out infected on their return to the country, the minister said.

“It is a very, very low rate when you look at it. That shows how well the (safe tourism certification) system works,” he added, stressing that they had also received positive feedback from many European countries.

The country last month began the rollout of COVID-19 vaccination for tourism employees, as well as people working in the aviation industry, including pilots and cabin crews.

Some two-thirds, namely 300,000 employees, have received their jabs so far, Culture and Tourism Deputy Minister Nadir Alpaslan said Sunday, stressing that all workers would be vaccinated by the end of June.

In another blow, Britain, the third-biggest source of holidaymakers, last month put Turkey on its travel “red list.”

“Possibly the hotels that mostly host Russians that were planning to open in June will start laying off personnel,” he said last week. “Hotels would need to have discounted prices.”

The government hopes over 30 million foreign visitors will arrive this year, twice as many as last, creating revenues estimated to reach around $23 billion.