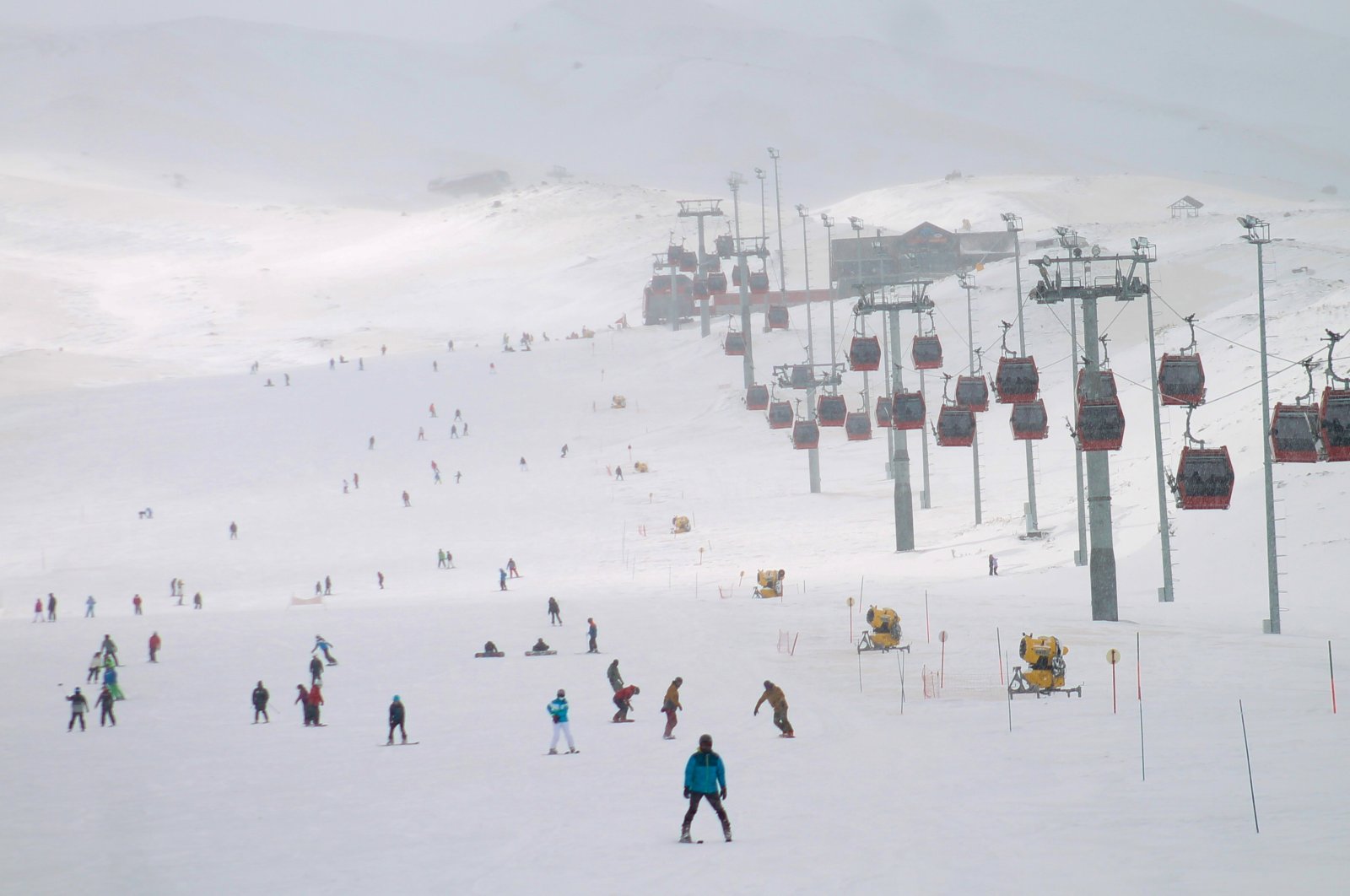 Turkey has huge potential for winter tourism and may host the Winter Olympics in the future, said Sarah Lewis, the British former Olympic alpine skier who is bidding to become the fifth, and first female, president of the International Ski Federation (FIS).

"The Turkish Ski Federation is a tremendous organization. They have really evolved their activities. They recognize that they have fantastic opportunities in the country. With 60% of the country above 2,000 meters (6,560 feet), there is plenty of snow during the winter season and therefore a huge potential to develop winter tourism too," Lewis told Anadolu Agency (AA) in a Zoom interview – ahead of a meeting with Turkish Ski Federation President Ali Oto on Monday.

"I am very much looking forward to meeting with the president of the Turkish Ski Federation. Ali Oto is doing tremendous work, not only in Turkey but also in the Balkan region," she said.

Concerning her candidacy, which could result in her becoming the first female president of the FIS, Lewis said: "It is exciting. It is a great opportunity. Skiing is a diverse sport. Athletes are well represented in both genders and all disciplines, and that's not the case in the leadership, with no elected female representative. So, it is very important that our whole community is represented when it comes to leadership as well, and not just in the field of play."

"l have the necessary skills, qualities and experience to be able to fulfill the role as well as strong relations with all the national associations and throughout the Olympic movement and the International Olympic Committee. Thus, l really think l am the candidate that can best represent everyone's interests from traditional and developing nations, including representing women within the organization, who make up nearly half of the athletes," she added.

She also said she would not take a presidential salary.

"l feel the role of president is to serve the organization. Therefore, that is the pledge l am making."

On climate change, she said: "Climate change cannot be ignored. It is a reality. Within winter sports, the requirement of snow is absolutely imperative. Addressing sustainability and striving to become climate neutral is clear."

Regarding the ongoing pandemic, Lewis said: "We are in the middle of a global pandemic, and this has lasted for more than a year now. The situation will not be any different after the election on June 4 (for the FIS presidency). Therefore, we need to be able to address the measures urgently."

"The national associations, organizers, athletes and everyone in our community have been affected by the pandemic, and l will introduce a COVID-19 Recovery Fund to help them deal with the different challenges, the situation, the circumstances of everybody, and how this can be best supported," she added.

Whether Turkey would host the Winter Olympics in the future, she said, "Absolutely – this is a reality through building up more experience at the highest level in all 15 Olympic disciplines."

Turkey's eastern Erzurum province was among the bidding cities for the 2026 Winter Olympic Games, which will be hosted in the Italian cities of Milan and Cortina d'Ampezzo.

Last week, Lewis announced her candidacy for the FIS president and published her manifesto, the FIS Piste Map, on her website www.sarah-lewis.com.

If elected, she would be the fifth, and first female, president in the 97-year history of the FIS.

The former Alpine skier had been with the FIS for 20 years until October 2020.

The election will be held on June 4 as the current president, Gian-Franco Kasper, will step down after 23 years in the position.

Meanwhile, investments in Erciyes Ski Resort in central Turkey, another hot spot for foreign and domestic tourists along with Erzurum, accelerated thanks to the busy winter season despite the pandemic.

The resort’s chairperson, Murat Cahid Cingi, told AA that the busy winter season in the region put the need for amenity spaces and accommodation facilities back on the agenda.

"Despite the pandemic, Erciyes had a very successful winter season," Cingi underlined, so investments that started before the winter season still continue, he said.

"Construction for Turkey's largest mountain hotels, the Xperia Hotel and Radisson Blu Hotel, continues in Erciyes," besides the high-altitude sports center by Kayseri Municipality, he said.

"We are talking about an investment of nearly TL 500 million ($70 million)," Cingi said.

Noting that the number of foreign tourists visiting Erciyes rose significantly in the last four years thanks to charter flights, Cingi said the ski resort generated $100 million in income the December-March ski season.

Recep Arifoğlu, the tourism investments coordinator at Artaş Inşaat, said investment in a four-star hotel on Erciyes Mountain is set to be completed on Dec. 20 and it will be ready for the winter season.

The total amount of investment in the hotel, which will have 60 luxury rooms and a spa area of 1,500 square meters (around 16,146 square feet), is $12 million, Arifoğlu said.

"There will be an entertainment and sports area that will serve 2,000 people a day," he noted, adding the brand name of Radisson Blu will make the facility a "center of attraction."

Touching on the reasons for choosing Erciyes for the investment, Arifoğlu said the ski resort stands out with its quality, size and technical facilities.

"Erciyes, which is among the most modern facilities in Europe, has become one of the favorites thanks to its 120 kilometers (74 miles) of ski track and 110 kilometers of cable car line serving a wide range of ski lovers, from new learners to Olympic athletes."

The mountain also attracts snowboarding, snow kite and snowmobile sports lovers in the winter, along with hosting downhill bike races and sports camps in the summer, he stressed.

Underlying the ease of transportation to Erciyes, Arifoğlu said, "It is one of the easiest ski resorts to travel to, as it is connected to Istanbul, Izmir and Antalya by direct domestic flights, by international flights to Germany, the Netherlands, Switzerland and France, as well as by charter flights to Russia, Ukraine and Poland."

"You can reach Erciyes Ski Resort by a 30-minute drive from the city center," he said.

He added that the boom in foreign tourist numbers created the need in the region for a world-class facility, so the hotel group decided to invest in Erciyes.

"Besides, being located near Cappadocia, another touristic region in Turkey famous for its fairy chimneys, and the newly discovered touristic values of Kayseri, are increasing the popularity of Erciyes both in domestic and foreign markets," Arifoğlu highlighted.

The resort in Kayseri province, which offered skiers or snowboarders a safe and healthy holiday this winter amid the pandemic, was among the top five destinations from the 30 entries from Turkey.

Erciyes Ski Resort was also recently certified by Bureau Veritas, a company specialized in testing, inspection and certification, for having taken all preventive measures against the coronavirus's spread.

Also, Erciyes is the first and only ski center so far in the world with the Safe Ski Resort certification, a statement from the management of the resort said.