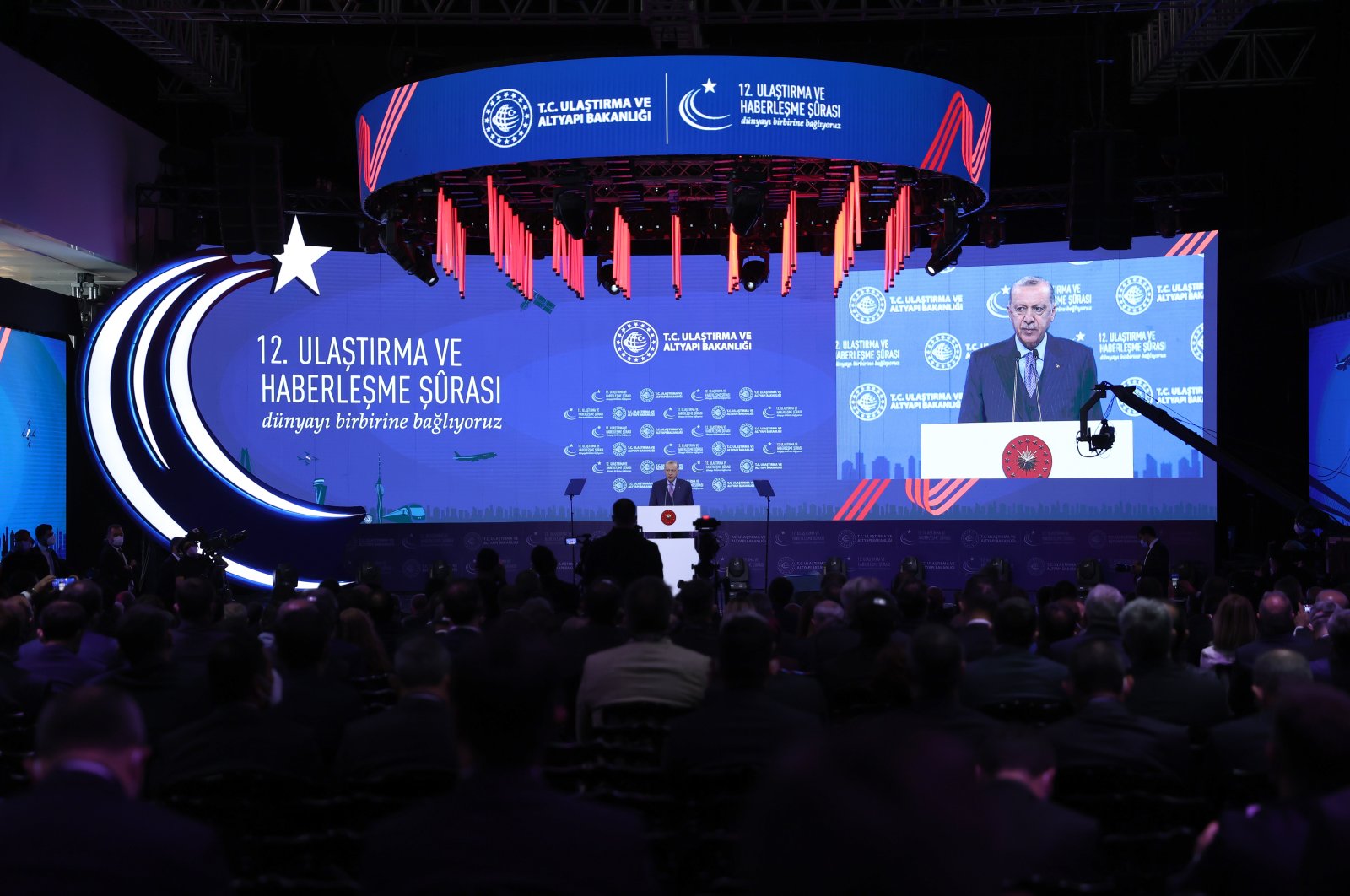 Turkey’s biggest project in maritime transport is Kanal Istanbul, a mega waterway project on the edge of Istanbul, which is important for both the coastal security of the country and for global transportation, President Recep Tayyip Erdoğan said Friday

The president was speaking at the 12th Transport and Communication Council held at Istanbul’s Atatürk Airport.

“The fact that the Bosporus is no longer able to carry the increasing freight and passenger traffic and that our coasts are under constant threat has led us to seek such an alternative,” Erdoğan said, noting that the Kanal Istanbul project was brought to the agenda about 10 years ago. The project has been under discussion since then and finally, “it has come to the stage of the actual implementation,” he said.

Sazlıdere Bridge was the first concrete step of Kanal Istanbul, he said, and that was followed by the Halkalı-Kapıkule Railway Bridge, the construction of which was started after the tender and site delivery.

“We will continue to implement other works within the scope of the project in this way within a certain plan. We will start the excavation of the canal according to the plan in the program.”

The groundbreaking ceremony of the first bridge to be constructed over the huge waterway project on the edge of Istanbul linking the Black Sea to the Mediterranean was held in June.

“2021 will be an important year for Kanal Istanbul. Our goal is to hold tenders and start work at full throttle,” Transport and Infrastructure Minister Adil Karaismailoğlu said at the time.

Floated a decade ago, the Kanal Istanbul project intends to stem the risk posed by ships carrying dangerous goods via the Bosporus, especially oil tankers.

Erdoğan stated that they plan to increase the share of sea transportation in trade with projects such as the expansion of Filyos Port, Rize Iyidere Logistics Port, Çandarlı Port and Mersin Port.

Another key project, the construction of Filyos Port, began in northwestern Zonguldak's Filyos district and was accompanied by an Industrial Zone. It is among the highest-funded works in the state investment program and is said to be the third-largest port in Turkey.

Stating that Filyos Port, which was put into service, is rapidly becoming an important center in the trade traffic of Russia, the Balkans and the Middle East region, Erdoğan said, "When we complete our other projects, we will increase the share of our country in maritime trade.”

Recalling that Turkey has an area of 780,000 square kilometers (301,160 square miles) stretching from Europe to the Caucasus and Central Asia to the east, and the Middle East and North Africa to the south, Erdoğan said that the geography poses difficulties for investing in transportation, however, they have achieved success in every field from land to railway, from airway to sea.

“As Turkey, we have implemented a public investment of TL 1 trillion in the last 19 years in the fields of transportation and communication,” Erdoğan said.

Fast, comfortable and safe land transportation infrastructure in passenger and freight transportation was established, the president said, while the highway length was increased from 1,714 kilometers to 3,532 kilometers.

“We are a country with uninterrupted highway transportation from (northwestern) Edirne to (southern) Şanlıurfa, which is the gateway to our country from the Balkans and exit to the Middle East.”

Erdoğan, who said that high-speed train lines were built and put into operation, underlined that they are working on developing the first domestically-produced electric train.

“We are starting the production of our national electric locomotive next year. We have completed the high-speed train design, we are in the prototype production phase,” Erdoğan said.

In order to overcome the difficulties of geography, mountains are crossed with tunnels and rivers with bridges, Erdoğan said, “We increased the total length of tunnels on our roads from 50 kilometers to 631 kilometers, and the length of bridges and viaducts from 311 kilometers to 710 kilometers."

Erdoğan emphasized that although vehicle mobility in Turkey increased by 170%, there was an 80% decrease in accidents thanks to road investments, which contributed significantly to the environment by reducing emissions as well as saving fuel.

The president also commented that great progress has been made in communication investments, which have now become an integral part of transportation projects.

“The fact that we have come to the stage of producing and launching our satellites is the most concrete example of the distance we have covered in this field,” Erdoğan said.

“Our goal is to become a developer of information technologies, rather than a consuming one,” he added.

Turkey’s Türksat 5A satellite was launched by SpaceX in January 2021. The satellite secured Turkey's orbital rights for the next 30 years, covering Europe, the Middle East and large regions of Africa as well as the Mediterranean, the Aegean and the Black Sea region.