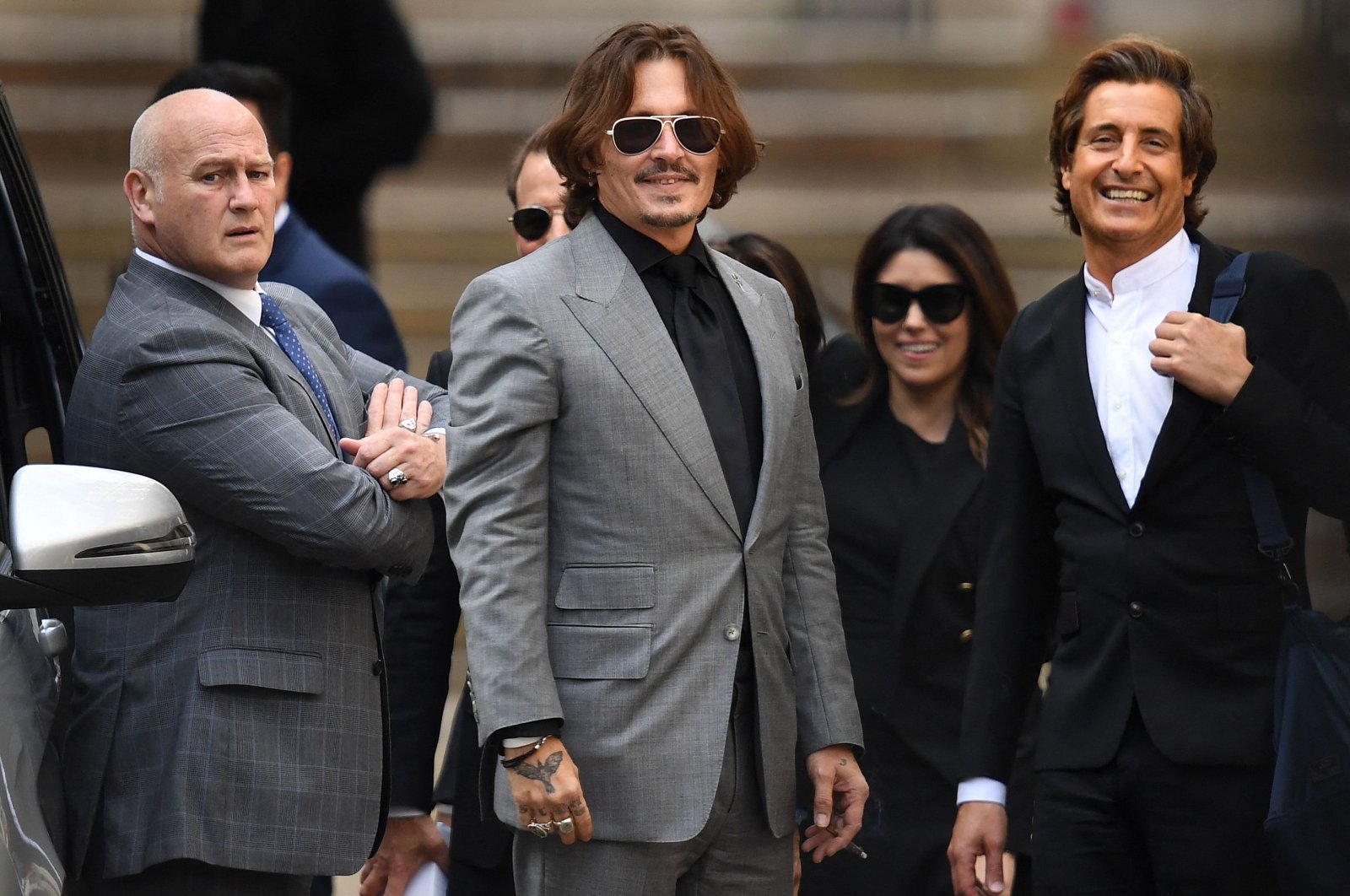 In this file photo taken on July 28, 2020 actor Johnny Depp gestures as he leaves the High Court after the final day of his libel trial against News Group Newspapers (NGN), in London. (AFP Photo)
by Agencies Mar 25, 2021 1:57 pm
RECOMMENDED

Actor Johnny Depp's bid to challenge a ruling on his assault on his ex-wife Amber Heard and a subsequent article labeling him a "wife beater” was ended by a British court Thursday.

Two Court of Appeal judges said the Hollywood star cannot challenge the High Court’s rejection of his libel lawsuit against the publisher of The Sun newspaper.

The justices, James Dingemans and Nicholas Underhill said the earlier court hearing was "full and fair” and the trial judge's conclusions "have not been shown even arguably to be vitiated by any error of approach or mistake of law.”

They concluded that "the appeal has no real prospect of success and that there is no other compelling reason for it to be heard.”

The ruling meant that Depp, the star of films including "Pirates of the Caribbean" and "Edward Scissorhands," has exhausted his legal fight against the ruling in Britain.

High Court Justice Andrew Nicol ruled in November that allegations against Depp, made in an April 2018 article, were "substantially true.” The judge ruled that Depp, 57, assaulted Heard, 34, on a dozen occasions and put her in fear for her life three times. Depp was also ordered to pay the newspaper's publishers News Group Newspapers (NGN) 628,000 pounds ($873,000) in legal costs.

Lawyers for Depp argued at a court hearing last week that Depp hadn't received a fair hearing and that Heard was an unreliable witness. As evidence of her unreliability, they claimed that Heard hadn't kept her promise to donate her $7 million divorce settlement to charity.

The appeals judges said it was "pure speculation, and in our view very unlikely” that the fate of the divorce money influenced judge Nicol's decision.

"It is clear from a reading of the judgment as a whole that the judge based his conclusions on each of the incidents on his extremely detailed review of the evidence specific to each incident,” they said.

"In an approach of that kind, there was little need or room for the judge to give weight to any general assessment of Ms. Heard’s credibility."

The High Court ruling came after a three-week trial in July, in which Depp and Heard gave conflicting accounts of their brief, tempestuous marriage. During the trial, Depp acknowledged wide-ranging drug problems, but accused Heard of making up abuse allegations and insisted he was "not a violent person, especially with women.”

His lawyers argued that the allegations in The Sun caused "serious harm” to the actor’s reputation and "significant distress and embarrassment.”

In the wake of the ruling, Depp said he was leaving the "Fantastic Beasts” film franchise, the movie spin-offs from the "Harry Potter" books by J. K. Rowling and films, after studio Warner Bros. requested his resignation.

Depp is also suing Heard for $50 million in Virginia over a Washington Post op-ed essay that she wrote about domestic violence. The trial, in that case, was recently delayed until April 2022.

In her evidence, Heard said Depp would turn into a jealous alter ego, "the monster," after bingeing on drugs and alcohol and had threatened to kill her. She detailed 14 occasions of extreme violence when she said the actor choked, punched, slapped, head-butted, throttled and kicked her, with Nicol accepting 12 of these accounts as true.

"We are pleased – but by no means surprised – by the court’s denial of Mr. Depp’s application for appeal," a spokeswoman for Heard said, saying the evidence was "overwhelming and undeniable".

The Sun said the decision vindicated the evidence Heard gave, saying it had been confident that permission to appeal would be refused.

Depp brought the action because he said The Sun's allegations had done a "disservice" to the #MeToo movement it was trying to support, his lawyer David Sherborne said.

The 16 days of proceedings in July, which both Depp and Heard attended, exposed the couple's troubled and volatile relationship in excruciating detail.

Depp faced days of cross-examination in which the star admitted to only hazily remembering some events because he was high on drugs.

But he vehemently rejected accusations he hurt Heard while battling a drug addiction over a three-year span that ended with her 2016 decision to seek a restraining order and file for divorce.