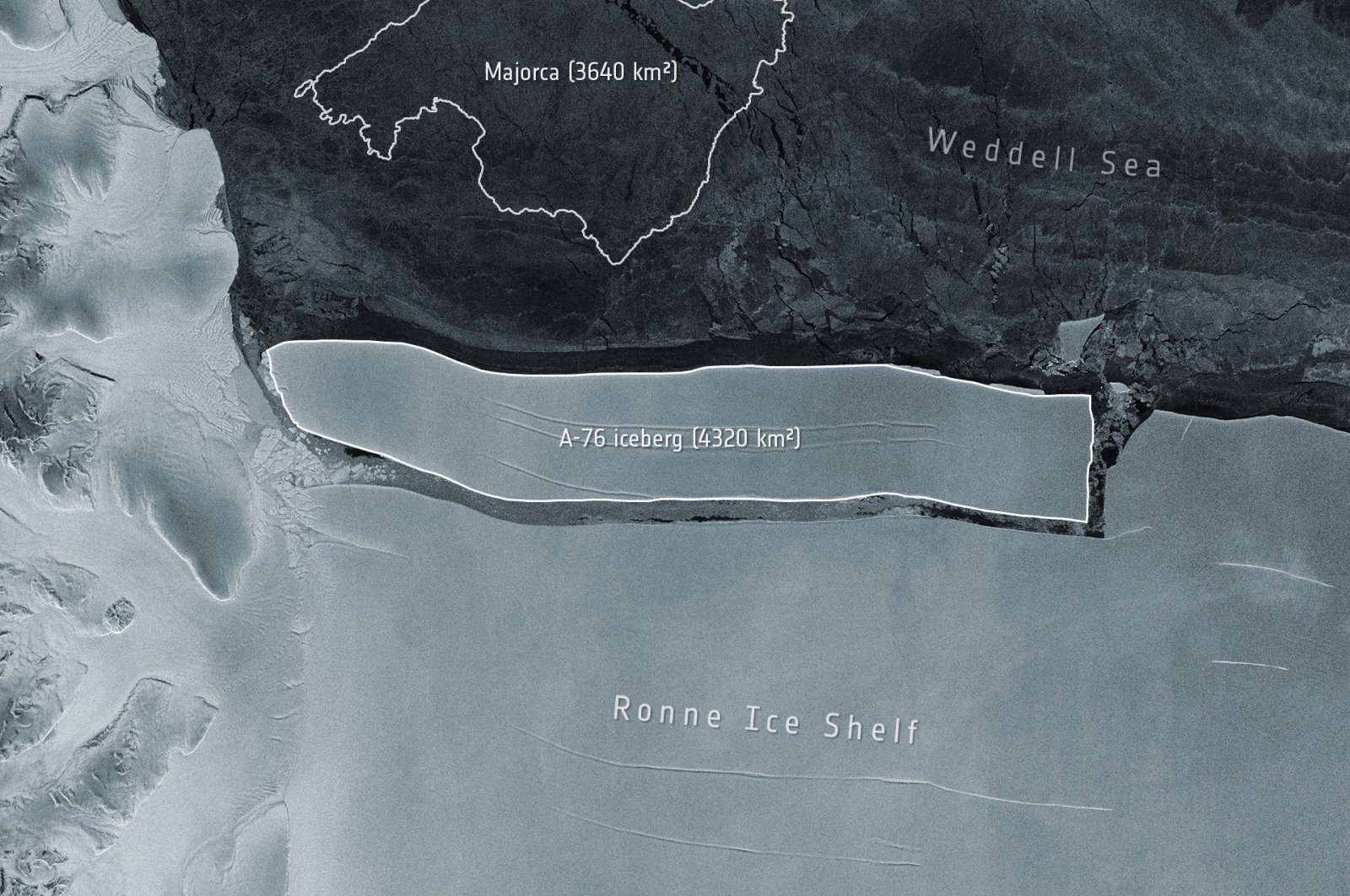 This handout image, released by The European Space Agency (ESA) on May 20, 2021, shows a view captured by the Copernicus Sentinel-1 mission – combined with a graphic of the Spanish island of Majorca for scale – of the A-76 iceberg floating away from the Ronne Ice Shelf in the Weddell Sea, Antarctica, March 9, 2021. (EUROPEAN SPACE AGENCY/AFP Photo)
by French Press Agency - AFP
May 20, 2021 11:48 am

Just a month after one of the largest icebergs ever recorded, A68, melted away, another huge iceberg broke off from an ice shelf in Antarctica, the European Space Agency (ESA) said.

Called A-76 and roughly the shape of Manhattan – but more than 70 times bigger – it was picked up on satellite images and is "currently the largest berg in the world." It is now floating through the Weddell Sea, the ESA said Wednesday.

The iceberg is around 170 kilometers (105 miles) long and 25 kilometers wide, with an area of 4,320 square kilometers, slightly larger than the Spanish island of Majorca.

The berg, which broke off the western side of the Ronne Ice Shelf, was originally spotted by the British Antarctic Survey and confirmed using images from the Copernicus satellite.

It takes its place as the world's largest from the A-23A iceberg – which is approximately 3,880 square kilometers in size – that is also in the Weddell Sea.

In November last year, what was then the world's largest iceberg appeared to be on a collision course with a remote South Atlantic island home to thousands of penguins and seals, threatening to impede their ability to gather food.

That iceberg, known as A68a, had also broken off from the Larsen Ice Shelf, which has warmed faster than any other part of Earth's southernmost continent.

A68a was 160 kilometers long and 48 kilometers across but it broke apart before it could cause any damage to the abundant wildlife in the British Overseas Territory of South Georgia.

Earth's average surface temperature has gone up by one degree Celsius since the 19th century, enough to increase the intensity of droughts, heat waves and tropical cyclones.

But the air over Antarctica has warmed more than twice that much.

Major chunks of the Peninsula's Larsen Ice Shelf – which had been stable for more than 10,000 years – disintegrated within days in 1995, and again in 2002. This was followed by the breakup of the nearby Wilkins Ice Shelf in 2008 and 2009.

A process known as hydrofracturing was likely the main culprit in both cases, earlier research has shown.

Hydrofracturing occurs when water – which is heavier than ice – pours through cracks in the surface of ice shelves caused by surface warming, violently forcing the fractures to zip open, causing icebergs to break off.

Icebergs are traditionally named after the Antarctic quadrant in which they were originally detected, then a sequential number.

If they break apart more letters are added to differentiate the fragments.