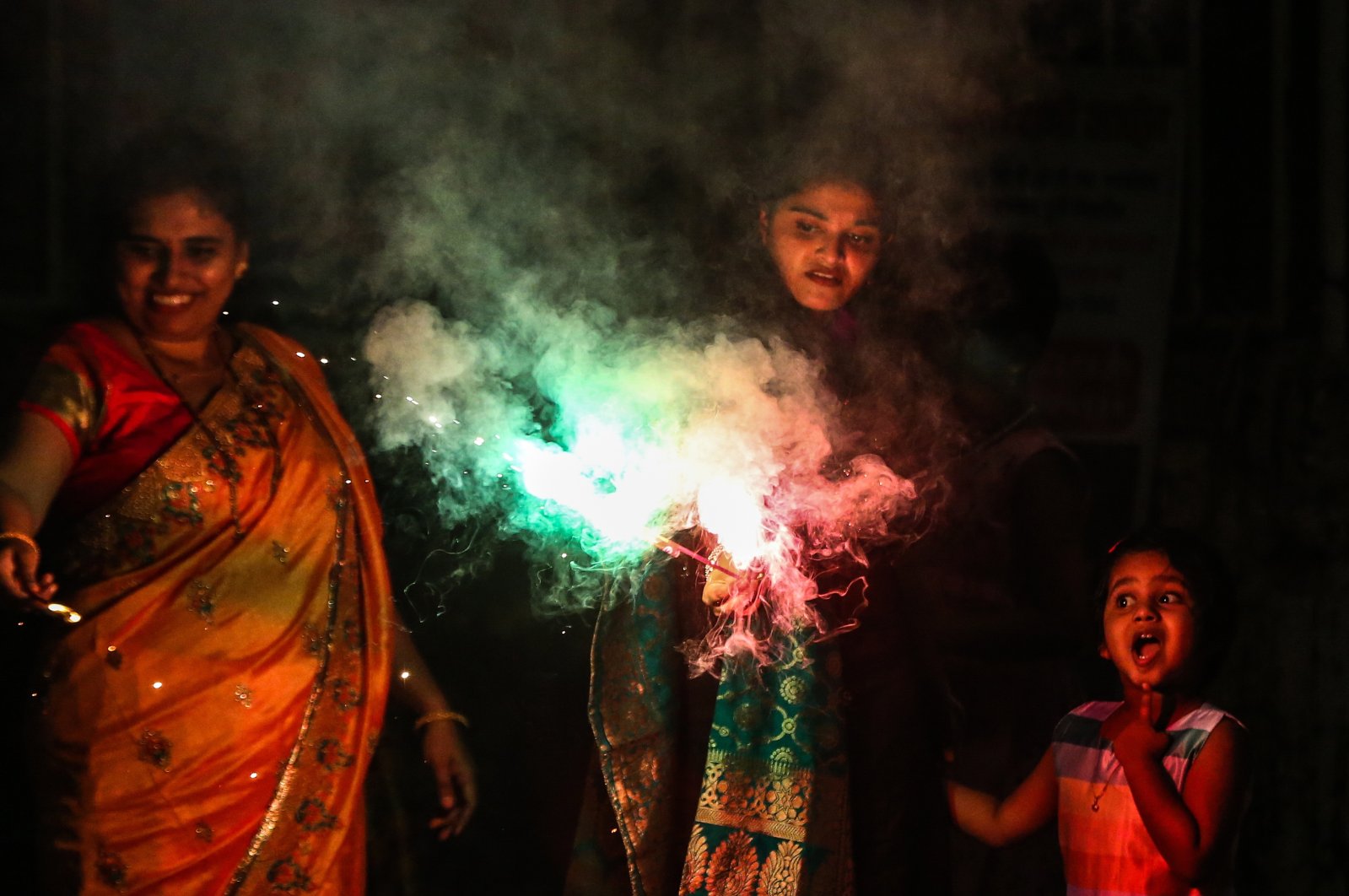 Revelers light a firecracker in a street as part of celebrations during Diwali, the Hindu festival of lights, in Mumbai, India, Nov. 4, 2021. (EPA Photo)
by REUTERS Nov 05, 2021 11:31 am
RECOMMENDED

Residents of New Delhi paid the environmental price for overindulging in Diwali festivities the night before, awaking to a blanket of toxic smog covering the city as it reported the most dangerously polluted air levels this year.

New Delhi has the worst air quality of all world capitals, but even by its sorry standards Friday's reading was extra bad, as people paid the price for celebrating India's biggest festival in the noisiest, and most smoky way possible despite a ban on firecrackers.

The Air Quality Index (AQI) surged to 451 on a scale of 500 – the maximum recorded this year – indicating "severe" conditions that affect healthy people and seriously impact those with existing diseases, according to the federal pollution control board's guidance.

The AQI measures the concentration of poisonous particulate matter PM2.5 in a cubic meter of air. In Delhi, a city of nearly 20 million people, the PM2.5 reading on Friday averaged 706 micrograms, whereas the World Health Organization (WHO) deems anything above an annual average of 5 micrograms as unsafe.

Airborne PM2.5 can cause cardiovascular and respiratory diseases such as lung cancer. And, in India, toxic air kills more than a million people annually.

"The firecracker ban didn't seem to be successful in Delhi, which led to hazardous pollution levels adding on top of existing perennial sources," Sunil Dahiya, Analyst, Centre for Research on Energy and Clean Air (CREA) said.

Every year, either government authorities or India's Supreme Court impose a ban on firecrackers. But the bans rarely appear to be enforced.

Making matters worse, Diwali falls in a period when farmers in Delhi's neighboring states of Punjab and Haryana burn the stubble left after harvesting to prepare their fields for the next crop.

Stubble fires accounted for up to 35% of New Delhi's PM2.5 levels, according to data from SAFAR's monitoring system, which falls under the federal Ministry of Earth Sciences

A rare spell of clear skies in October due to intermittent rains and winds had helped Delhiites breathe their cleanest air in at least four years.

But during winter months pollution levels surge in northern India, as lower temperatures and a drop in wind speed tend to trap pollutants in the air longer.

Sick of the lack of commitment to making the capital more liveable, Ambrish Mithal, a doctor at the Max Healthcare hospital in New Delhi, vented his frustration over the deteriorating AQI readings.

"It's terrible for those with allergies and asthma. We will continue to squabble over reasons and are doomed to suffer," he wrote in a post on Twitter.

Indian governments are often accused of not doing enough to curb pollution, as they prioritize economic growth to lift living standards in the world's second-most populated country.

On Monday, Prime Minister Narendra Modi told the COP26 climate summit in Glasgow that India would achieve net-zero carbon emissions by 2070, but some experts reckoned that target was at least two decades too late.