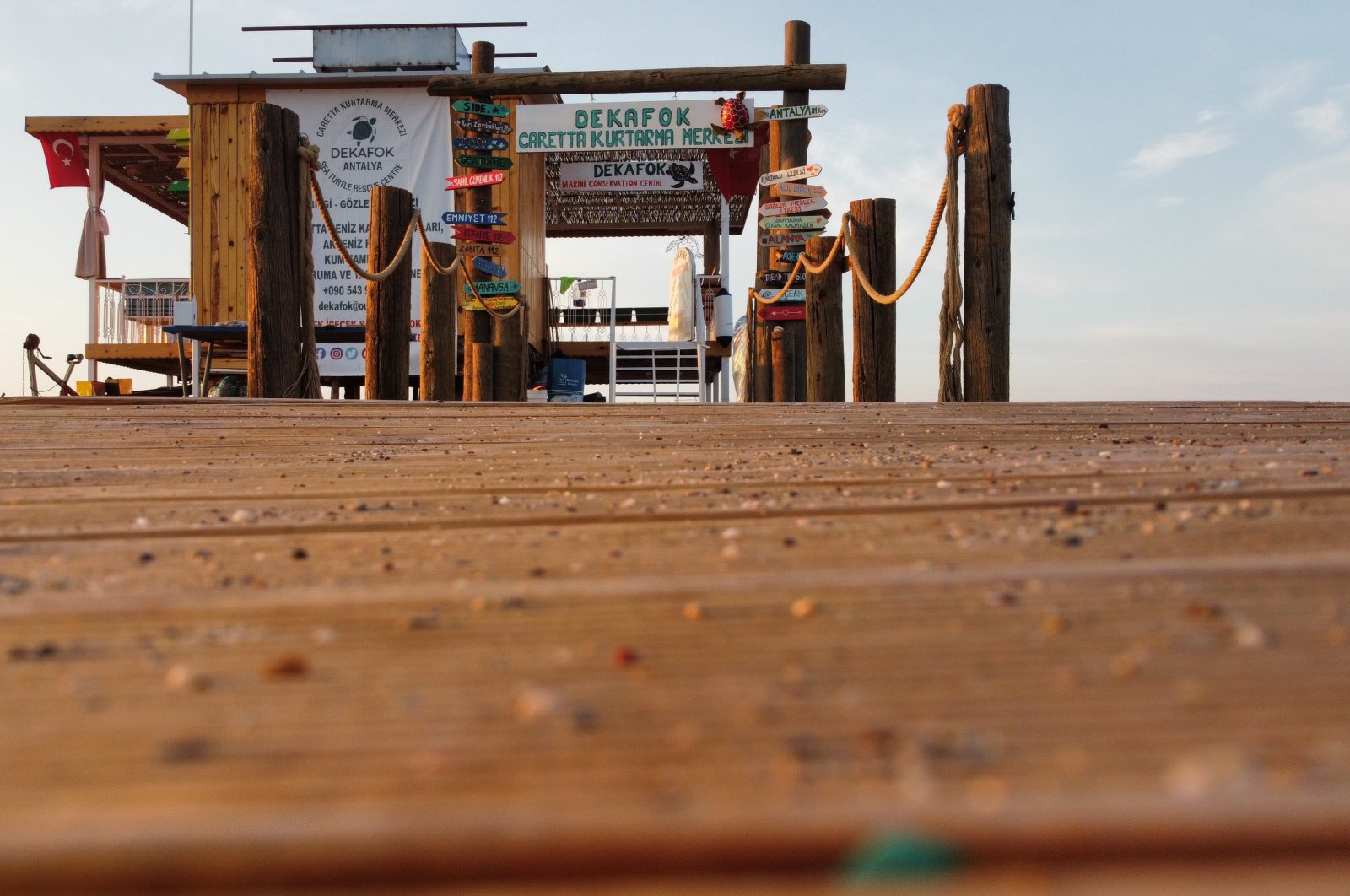 From saving turtles and publishing books to art, as International Migrants Day approaches on Dec. 18, we take this opportunity to celebrate the achievements of expats in Turkey

A few days ago we published the first part of a series celebrating the many expat successes this year in Turkey, and yet there are so many more stories to tell about members of our expat community here in Turkey who continue to work and contribute to their adopted homeland.

The Bodrum Art Collective is born

This year welcomed the formation of the Bodrum Art Collective: a group of five multinational artists living in the Aegean port of Bodrum. This creative group consists of Annie Onursan, a U.K. native and former luxury yacht chef who you may know as the author of the blog “Back to Bodrum.” Sue Dunlop is another Bodrum resident and British expat who has exhibited works throughout the U.K. Johanna den Dunnen is originally from the Netherlands but lived in South Africa and Britain before settling in Bodrum. Sarah Carter is an artist from the U.K. who has exhibited all over the world but may be more familiar to us expats in Turkey for having illustrated the “Secrets of the Turkish Kitchen” cookbook by Angie Mitchell.

Last, but certainly not least, is Ali Hajj, who originally hails from Pakistan but moved to America at the age of 16 and comes from a corporate background but has now settled in Bodrum and is a student of Sufism. Each artist has their own unique style but where they converge is in the vivid colorful and uplifting imagery, much of which contains elements of their experiences in Turkey. Starting in the new year, every month the group plans to feature an artist from the local community to showcase their work and share their stories.

You may recall back in June, the team from DEKAFOK, which was literally Seher, a sole woman who had devoted her life to protecting nesting loggerheads in Manavgat, and “Tread the Globe,” which is run by the vlogging couple Chris and Marianne who hail from the U.K., were in Turkey on their quest to travel the globe in their van Trudy when the pandemic struck. Long story short, in June, they paid a visit to Dalyan to meet with Captain June and the folks at the Turtle Rehabilitation center at Iztuzu Beach to learn how to best establish a center to protect the turtles in Manavgat. They all paid a visit to me, and I wrote up an article while "Tread the Globe" publicized this magnetic and angelic woman’s story and set up a Sea Turtle Rescue Fund on GoFundMe. Since June, the goal of 20,000 British pounds ($26,600) has been well surpassed and so far, the funds collected have reached over 30,000 British pounds.

Despite a summer marked by fires, thunderous storms and multiple other challenges, a proper center was opened on Oct. 30. Chris and Marianne returned to Antalya to be there for the momentous occasion after traveling to eastern Turkey. Joined by volunteers from all over the world, including Irish marine biologists flown in by Turkish Airlines for the occasion, Seher and her nonprofit organization DEKAFOK, devoted to protecting the coastal region’s turtles, seals and orchids, officially opened a proper center on Kleopatra Beach from which they can now operate. As an expression of appreciation, a list of names of those who donated adorns one of the center's walls. The fund still continues to collect donations and thankfully so as nearly three busloads of schoolchildren arrive at the center daily to learn from Seher all about how to conserve the beach’s precious flora and fauna. If you want to check out the wonderfully inspiring story of how two travelers ended up teaming up with this saintly woman who has devoted her entire existence to protecting nesting turtles only to end up founding a center within a matter of months, you can follow it all on the "Tread the Globe" YouTube channel.

If you don’t know about Captain June it is high time you do. This now 99-year-old British native is credited with leading a team of environmentalists to protect Iztuzu Beach, home to nesting loggerhead turtles, from development. Her hut and a turtle rehabilitation center are the sole permanent structures on the 4.5-kilometer (2.7-mile) stretch of beach that leads into the Dalyan River. Her environmental mission in the '80s rallied the likes of the U.K.’s Prince Phillip and garnered her the Most Excellent Order of the British Empire. At the beginning of October this year, a special event was held as a gesture of gratitude for “the mother of turtles” in which approximately 100 people from various nonprofits and associations canoed from Köyceğiz Lake through the Dalyan River to Iztuzu Beach.

On Dec. 22, June Haimoff turns 99 and she continues to live in Dalyan, where a street is named after her and the boats operating on Dalyan River continue to bear a plaque affirming they are Captain June “approved.” As for the Turks that adore her, to them she turns 100 on Wednesday as in Turkey the first year of age starts the day one is born, making them perpetually a year ahead. Nonetheless, 99 or 100, this expat whose legacy will live on certainly deserves a mention!

Founded in 2006, the Ege Eye has been providing news on and by expats in the Kuşadası region and greater Turkey for 15 years now, and this year they published their 200th monthly edition. While pre-pandemic it was published in print, the newspaper is now available online and in a downloadable PDF format. The Ege Eye crew also runs an information center where people can come by and ask questions to many of the expats involved with writing the paper who donate their time to help the local expat community.

A year of munching!

The visually and literally mouthwatering concoctions that are Munchbox TR, a gift box of baked goods such as croissants in a sandwich or free form adorned with a variety of savory and sweet gourmet toppings such as chocolates and charcuterie meats was the creation of German expat Roger Lange and his Turkish partners Burcu Temiz and Can Uzaras this year at Cafe Chives, located in the center of Bodrum. Their Munchboxes are available on site, in addition to a wide variety of baked delicacies, but they also ship all over the country. I know for a fact they saved many an expat during the pandemic this year by bringing joy and satisfaction to multiple meals like picnics or at home and serving as an easy and personalized catering solution for events and parties. Check out their beautiful boxes of baked delights, which include cookies, pretzels and savory sourdough bread sandwiches on Instagram at Munchboxtr.

Patrick Bosteels is a Belgian expat and the mastermind behind Urla Coworking, a shared office and innovative space that opened in Urla three years ago. Literally bringing the coworking concept to Turkey’s southern coast, this summer Bosteels branched out and opened a new coworking space in Güzelbahçe called Yelki Co-working.

Many an Istanbul expat will be familiar with Kay Redrup, the chef and host behind Pop-Up Dinners Istanbul. A former restaurateur in Cihangir and a Dutch and Singaporean expat, Redrup is famed for her exotic gourmet meals. Noticing her talent, the Singapore Embassy asked her to put together a book on Singaporean cuisine with recipes that can easily be made with ingredients found in Turkey. Thus, “Kay’s Singaporean Cookbook” was made available in Turkish and now she is working on a whole “Expat Alchemist” series, which will include cuisines such as Punjab and will be published in English.