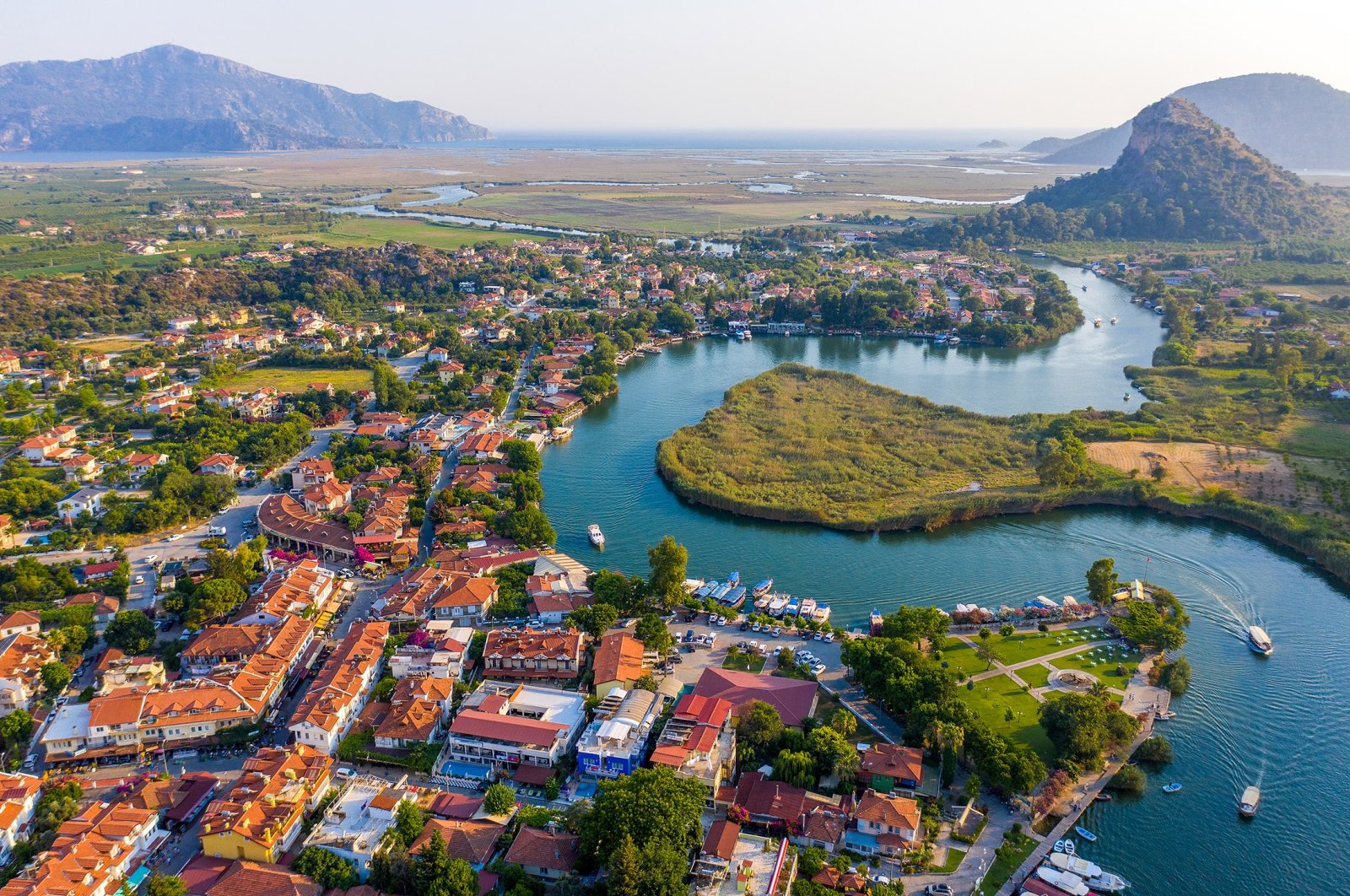 Discover what life is like for an expat in Dalyan, a very special town in Muğla that has become a popular relocation destination for foreigners

Spectacularly beautiful yet surprisingly low-key, Dalyan has become a hub for expats who reside full-time in Turkey or visit every summer from countries such as the U.K., the Netherlands and the U.S.

After living in Istanbul, Çanakkale’s Mount Ida (Kaz) region and Bodrum, I recently moved to Dalyan and am loving it! For those of you wondering what it's like for an expat to live in the town, here's my account of it.

Dalyan is a picturesque town in Muğla, southwestern Turkey, marked by spectacular over 3,000-year-old mausoleums carved into the mountain that hovers over the reed-lined Dalyan River the town is set against. The river serves as a channel between the expansive Köyceğiz Lake and Iztuzu Beach, a 4.5 kilometer (2.8 mile) long spectacular preserved beach that serves as a well-known nesting ground for Caretta caretta turtles. With all of the buildings kept to a maximum of two or three stories, the archeological wonder of the rock carvings is visible from many perspectives throughout the town.

While the landscape is defined by towering mountains, Dalyan itself and its largest neighboring town of Ortaca are all surprisingly flat. This fact alone facilitates an easier lifestyle and makes walking, biking and even driving much more enjoyable. The streets in Dalyan are relatively small and their distribution has been solved via roundabouts with only a couple of street lights in the town if that. Most of the roads are bicycle-friendly and there are many signs denoting distances for bikers and hikers. Even the highway leading in from Ortaca has a designated bike lane for a good chunk of it. Thus, there is an active bicycling culture here in Dalyan, with many using bikes as their sole mode of transportation. Dalyan is also famed for being a safe area and many people will boast about how they leave their bikes and cars unlocked.

My day starts off early as, after the traumatic heat in the height of summer, I have adopted a routine of being out of the house and on my walk by 7 a.m., when it is cooler. A lovely time of the day that seems to have its own existence, there are a number of neighbors also up at that hour walking their dogs like me or watering their gardens. I live in a particularly expat-heavy area and so half of the people I come across are foreigners, I now say hello in both Turkish and English to those who pass by. I walk along a hiking path that passes various grids of creeks along the mountains. I am often able to spot many animals on my walks including, crabs, frogs, wild boars, cows, sheep, lizards, turtles, cats and dogs.

The weekly market in Dalyan takes place on Saturdays and although it is smaller than its neighboring counterparts in Ortaca and Köyceğiz, it is certainly sufficient. There is a wide variety of fresh produce as well as stalls devoted to textiles, household goods and plants. One of the standout features is the market’s truly astounding array of regional cheeses. And I don’t just mean from the Muğla region, as there are huge barrels of tulum cheeses from Konya, Ankara and Fethiye, and all are on offer for tasting. As the region is undeniably hot, the market also has stands preparing Bici Bici, which is a Turkish variation of a snow cone that hails from Adana. Yet another wonderful feature of the Köyceğiz market is that ferries, loaded with expats and visiting foreigners, take off from Dalyan on Mondays specifically for a day trip to the market.

Daily life in Dalyan surrounds the Dalyan River and of course the Iztuzu Beach it connects to. There are ferry boats that take off regularly from Dalyan for 30 TL ($3.39) return. You can hop onto one of these ferries when it's time to go. The ride takes about 40 minutes and heads right past the majestic rock tombs and through reeds to the western end of Iztuzu Beach. As Iztuzu’s shore spans over 4 kilometers, the eastern end is accessible via car and is where the turtle rehabilitation center is located. The beach is expansive and undeveloped due to it being a breeding ground for Caretta caretta turtles. The lake sits on the other side of the beach making for a spectacular vista, equipped with windswept cypress and pink narcissus trees. The waves break as if it was an ocean, though all of the locals know to go early in the day to catch the calmer waters as in the afternoon the wind picks up literally blowing you away.

There are two other beaches, which are actually coves, in close proximity to Iztuzu, Kargıcak Bay and Aşı Koyu. Kargıcak Bay is stunning and has an adjacent turquoise cove that you can swim in, kayak or paddleboard too. The beach club is upscale and has DJs spinning into the night. The road however is frightful with cliffhanging twists and turns on a single-lane road. Aşı Koyu is in a smaller cove serviced by an establishment that offers dining, sunbeds and ziplining.

Canoeing in Dalyan is a wonderful experience. I and a handful of locals have our own kayaks, but there are also kayaking tours widely available. It is prohibited to kayak on the river in the heart of town from 10 a.m. to 6 p.m. Otherwise it is permissible as long as you steer clear of the boats, whose passing is their livelihood. Once I kayaked with two girlfriends who also live here and showed me a disguised entrance through beds of reeds to a parallel section of the river against the mountains that led to a natural thermal springs pool. There are also the Sultaniye mud baths, most frequently visited by boat in which you lather up in mud like Cleopatra once used to followed by a dunk in the thermal pools.

Throughout the year, the local and expat community also hold a number of special events. Just last weekend there was a benefit for Cat Paws, an association assisting street cats. Did I mention that Dalyan has the most adorable cat apartments sprinkled throughout the town that have been set up by local volunteers offering cats shelter and food? This week there was also a special canoe ride through the Dalyan River and an evening benefit in honor of Captain June, the local British expat who famously led the Iztuzu Beach to become a protected area. This week there will be a swim across the river and later this month there will be tango and Latin dance festivities.

In the evening I like to bike into town or take a walk along Sevgi Yolu, which is the northern end of the river that has a windy path along the water and the establishments that line it, including one of Dalyan’s two magnificent municipality tea gardens. The one on Sevgi Yolu opened this summer but the town’s main tea garden, the Kaunus Çay Bahçesi, is arguably the most spectacular in Turkey as it sits right across from the rock carvings on an area that jets out into the river. It is from there that I set out canoeing. There are also rowboats that can take you across the river to Çandır where the ancient town of Kaunus and the rock tombs are as well as a wonderful gözleme place aptly named “The Other Side.”

Hanging out in town is a joy in itself, there is no traffic and no horns, the main drag is a pedestrian street in the high season and most of the shops are owned by local retailers. Like the town, for locals the dining scene is mellow as we tend to avoid most of the seasonal restaurants along the river. However, of those worthy of knowing, Sahil Restaurant is a sure bet year-round for a classic fish dinner, Saklı Bahçe is the go-to for a classic Turkish breakfast on the river, while Melek Anne serves up simple a la carte dishes like kızartma (which means “fried” and is a medley of peppers, eggplant and potatoes fried and served with a garlic-infused yogurt) and tost (a grilled cheese sandwich).

Hands down the best food in town is located next to the mukhtar's office in a seemingly unsightly courtyard that comes to life at night with street musicians entertaining diners. There is a fish restaurant and a traditional Turkish restaurant serving up home-cooked kebabs and pides. Backyard No. 9 is the best venue for pizzas and burgers as it has a hip upbeat atmosphere and Nazo’s, a beautiful cafe and the coolest place in town to hang out serves up a fine burger. A note about Nazo’s is that this cafe was opened up by four friends, a number of which are well-known musicians and thus throughout the summer there have been low-key pop-up concerts when visiting musicians come to town.

Don’t get me wrong, Dalyan also has a touristic “Bar Street” equipped with souvenirs, jewelry and clothing shops, ice cream vendors and cafes that serve as expat hangouts, namely Rumours, Cafe Dalyano and Sofra. The most beautiful spot in town however has to be Beyaz Gül, a cafe right on the river overlooking the tombs with rustic bohemian furniture and an atmosphere that is reminiscent of Bali that exclusively plays jazz music.