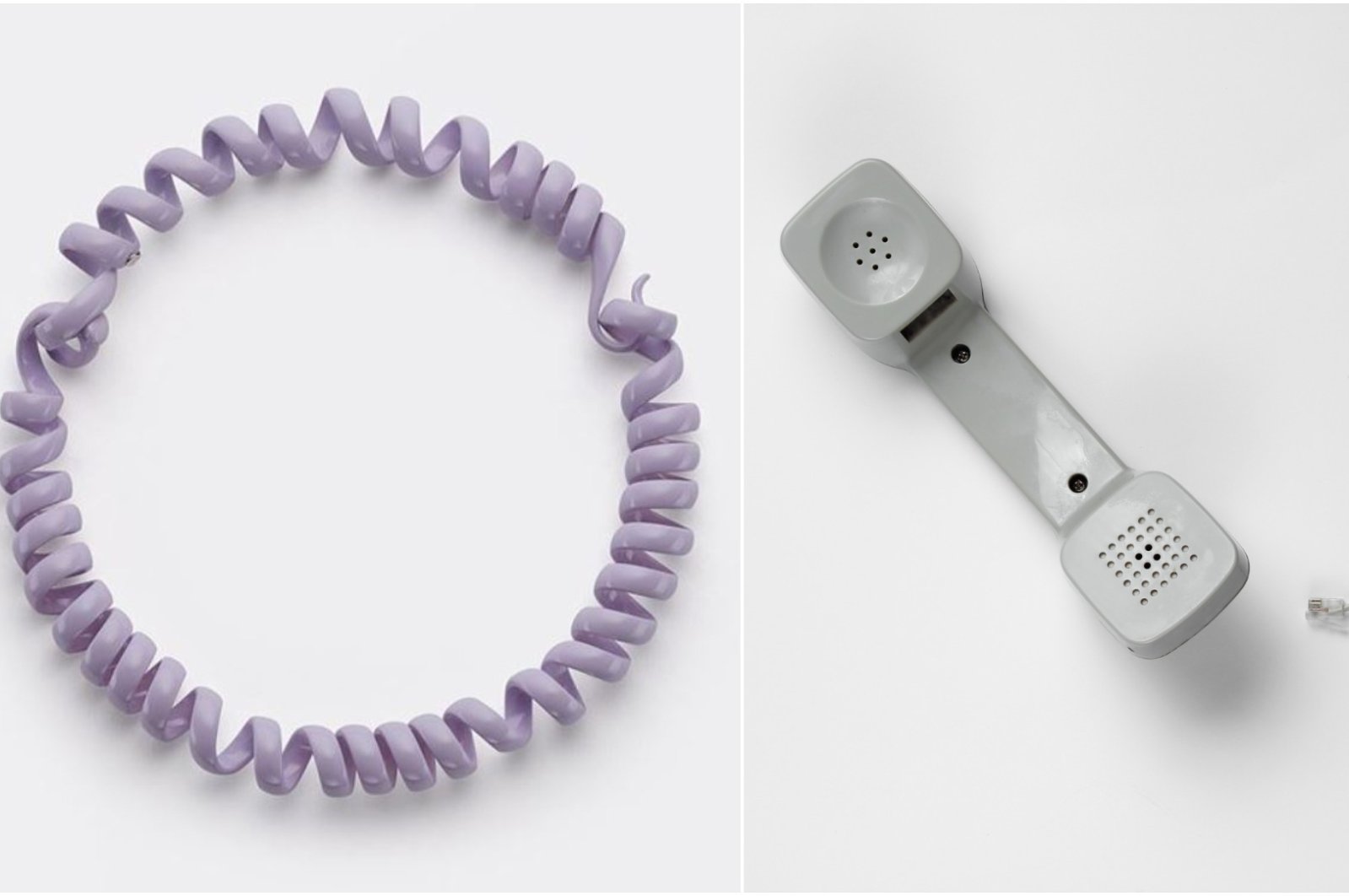 Today in why fashion sometimes does not make any sense, we have Italian luxury fashion house Bottega Veneta in the hot seat over its newest jewelry collection

The 90s called, they want their telephone cords back.

Bottega Veneta, one of the world's premier luxury brands, has been mercilessly mocked over the last few weeks for two new creations: a $3,081 flower beaded necklace and a $2,240 necklace that resembles the cord of a classic landline.

The Instagram handle Diet Prada, which has been honorably anointed by consumers and the fashion industry as its moral watchdog, was the first to highlight the ludicrous markup of these pieces of jewelry.

Even for the untrained eye and those oblivious to the world of design, it is not hard to see why this release has erupted in consumer furor.

"But it says Bottega on the clasp and the box so must be worth every penny right," said one netizen. Another said they had been making these necklaces in the summer as a kid and sold them for as low as $3.

"I guess I was missing a few numbers on the right," they added.

Although one can see the tedious effort and time that goes into creating the beaded necklace and how stiff fingers could get with all those tiny beads, in the eyes of the consumer, this is not enough to warrant their astronomical price tags.

It could be the materials used, the hours it took to make or the artistic genius behind it, you may say. But even if you factored in seasonal markdowns, fair and ethical pay, production and material costs, the pricing cannot be justified in this case. But smart luxury brands with knowledge of consumer behavior plaster price tags with unattainable numbers and get away with it because they can: If there was no demand, there would be no supply.

Let's take a look at all the arguments for and against.

Neither creation employs futuristic innovation, nor does it bring a substantial update to an old design.

The 70s inspired beaded necklace is made with multi-colored resin beads and white cord with a sterling silver clasp. Many people on social media have pointed out how similar the necklace is to the jewelry you buy at holiday resort towns or from Indie crafters. The luxury necklace incorporates red, green, aqua and yellow beads with black beads in between, passing through a white fabric thread with a trio of sterling silver beads signaling the end. London-based retailer MatchesFashion described the item as capturing "Bottega Veneta’s vivacious and poetic sensibilities," the latter part of which is grossly ironic.

The other Bottega design is as basic as it gets in the form of a spiralized choker, which is where all the telephone cord similes originate. The cord necklace comes with a hook fastening and, according to the company, pays tribute to artisans in Venice, mimicking the sculptural character of traditional Venetian glassworks. This design has also been ridiculed as unoriginal, imitative and childish by consumers. Available in grass green, calming lavender and a warm bianco, the necklace also has a bracelet and earring versions. Despite retailers describing them as "joyous and nostalgic" to appeal to lockdown-induced nostalgia, a feeling that resurfaces in times of hardships and crisis, the designs have left a bitter taste in consumers' mouths.

The composition of the materials used is also a letdown. No precious gems, 14-carat gold or diamond infusions were involved during their production.

The flower necklace's beads are made of resin, which is a fancy way of saying plastic; so it is not even glass or crystal. Only nine beads are used per flower. You can find resin beads, ranging in sizes from 6 to 10 millimeters and sold in 50, 100 or 200 pieces, which can be bought for under TL 40 ($5) on Etsy.

You may argue that the necklace is not plastic but today's resins are largely petrochemical-based which means it is. So it can't even be construed as a win for the environment.

Similar pieces can be found on Amazon, Etsy and at stalls of your local bead artists for less than $100 or as low as a couple of dollars. If you are really desperate, you could rake your old drawers and may be pleasantly surprised by a similar version from the 90s from Claire's.

You're not fooling anyone #BottegaVeneta pic.twitter.com/8d5uJXKE9Q

Design and pricing-wise the brand's decisions may not make sense but when it comes to marketing, the brand knows how to get more than its fair share of publicity, even if it is mostly negative. Although the brand shut down its Instagram, Facebook and Twitter accounts abruptly without warning earlier this year, it is still aware of how consumers will be doing all the promoting by engaging in such conversations on social media.

Bottega Veneta is no stranger to controversy. The brand found itself in hot water when it released its Resort 2021 collection featuring macrame encased stone pendants. The brand was accused of plagiarizing Niccolo Pasqualetti's designs after the Central Saint Martins student presented her portfolio during an interview.

When logic goes out the window

The allure of buying luxury items is undeniable for many — soft, quality materials, durability and craftsmanship. Though this is not always the case, these pros come with one big caveat: The exorbitant price tag. Luxury consumer goods are cost-prohibitive, which takes its appeal to a whole other level in a capitalist world. Logos, as we know, have become status symbols, much like iPhones in the world of smartphones.

But can you say that every single purchase you have made in your life has been purely practical or pragmatic? Have you never engaged in impulse shopping?

Consumer behavior is rarely rational; as much as we try to validate our purchases by saying we need them for a specific purpose, it's easy to see that we don't always have our own best financial interest in mind.

The fact that luxury items are more accessible now than ever, in the sense that with a few clicks you can have that pair of designer shoes or cardholder on your doorstep the next day, doesn't make it easy to refrain from buying. This convenience makes luxury goods a great choice for retail therapy – either for pleasure and relaxation or to distract and escape from reality.

Proponents of luxury shopping say experience also plays a great part in the buying process. Impeccably wrapped in perfumed tissue paper, engraved boxing, a personalized note written in calligraphy, the color scheme on the packaging is most often enough to make you swoon. However, it's very easy to fall into the consumerist trap of (brand) history, hype and exclusivity before you find yourself knee-deep in credit card debt.

Statistics support this. The amount of borrowed loans in Turkey as of July 2020 topped TL 706 billion while the total amount of debt on personal credit cards reached a worrying TL 115 billion. Contemporary humans are known to chase fulfillment through material goods, for Turks, it's no different.

The psychology behind luxury fashion is deeply engrained in what we seek as humans: a sense of belonging. By wearing that jacket emblazoned with logos, in a way we are trying to be accepted by society, to show that we have the means to buy that item and lead the lifestyle associated with it.

Self-esteem is another component of luxury shopping behavior. Even if you are not in the right financial circumstances to make that luxury purchase, buying a coveted, hard-to-reach item could serve as a confidence boost in times of low self-esteem. Psychologists do warn about the dangers of associating confidence and self-worth with material items because it can make it hard to feel content in life.

Whether through saving, credit card installments or cash, there is a sense of accomplishment that comes with buying a high-priced item. Spending big on something rare also instills a sense of power and satisfaction in the consumer. Having your finances and career in order and having the means to do so is a good goal to work toward in life but thinking of the aftermath is also important.

The media is complicit in fuelling this notion, especially for women. Whenever you watch a TV series or movie produced in the late 1990s or early 2000s, you can see the female protagonist pouring over a designer handbag, for which she saves up for months and months or blows her first paycheck on. Our brains have been steadily trained to think bags, shoes, a dress or a new suit is the ultimate reward for our hard work. This "treat yourself" mentality, as nice and comforting it seems at the time, can be detrimental to your psychological health and your wallet.

The quality argument is also largely invalid in today's world. There are many small, ethical brands that produce high-quality, designer goods for a fraction of luxury prices.

Non-luxury items are generally perceived as inferior to their luxury counterparts on grounds that they use cheaper materials, aren't as well-made or are mass-manufactured. Although there are many examples when this is the case, there is also ample evidence that suggests otherwise. Higher prices do not always equal better and the easiest way to spot that is to look at the label. If you see polyester, you should know it's time to walk out.

As a consumer, you could easily find a small independent brand that matches the quality of a bag worth thousands of liras from a known luxury fashion retailer but bias often prevents you from doing so.

When it comes to luxury goods, consumers don't buy them solely for looks, and when they do, it matters to them if they are the real deal or not.

A Yale study published in 2008 was centered around producing identical clones or copies of real-life objects such as artwork, sentimental possessions, memorabilia and seeing if children preferred one over the other. Children more often preferred the original and unique items over their perfect duplicates, confirming that this bias originates in our childhood.

The study conducted two separate experiments and the first found that when the children had an "emotional attachment" to the item they rejected or found it hard to accept the duplicate, while when there was no such association, they held no preference. The second established that children found memorabilia associated with famous people as more valuable over items that held actual financial value such as items made from silver.

This could be boiled down to authenticity. As the wearer or user, we know the item isn't authentic and hence, it doesn't produce the same feelings associated with it in our brains. The sentimentality of our possessions, the memories we associate with them and the dopamine triggered by our hedonistic urges at the time of buying cannot be replicated.

Some could argue that buying luxury goods could be a good financial investment with great returns. Even in the best-case scenario, which would be a luxury handbag, the odds are still not in your favor as a consumer.

At the end of the day, pieces of jewelry like Bottega Veneta's aren't a Hermes Birkin bag, which managed to outpace both the S&P 500 and the price of gold since 1981 when the bags were produced, according to Time Magazine. "The annual return on a Birkin was 14.2%, compared to the S&P average of 8.7% a year and gold’s -1.5%," it said. However, considering that Birkins are notoriously hard to get your hands on (either through a dear Hermes associate or through a reseller at double the original price of $10,000) and it needs to be in perfect condition (meaning: unused, where's the joy of that?), it is not a smart investment for most.