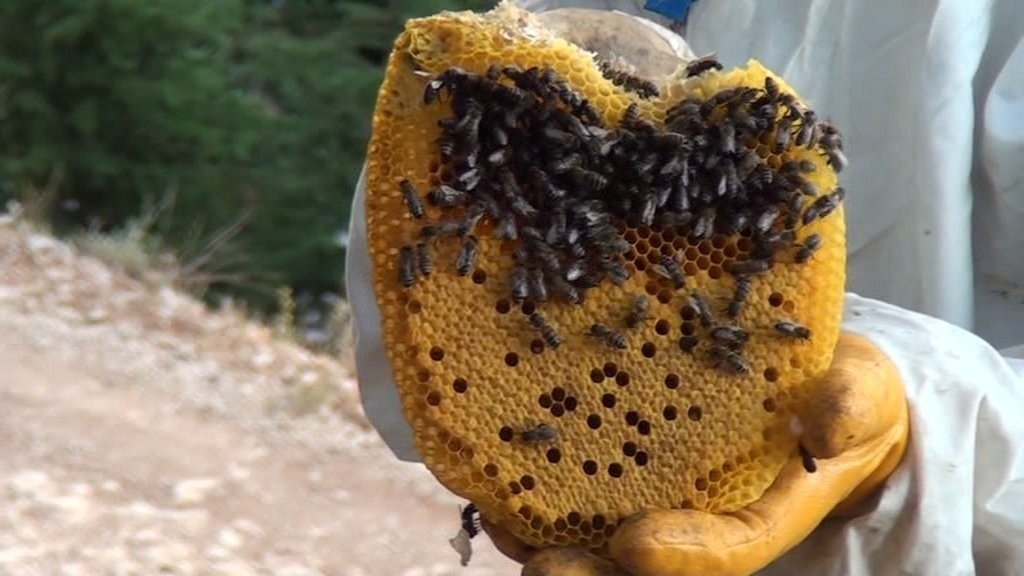 Two beekeepers in southern Turkey follow 'fugitive' bees, often for hours and sometimes days, in search of pure organic honey that can sell for up to 10 times more than the domestically produced varieties

Two beekeepers in the Akseki district of Antalya leave home at dawn on a sweet but challenging search to harvest organic honey from hives established by "runaway" bees.

Ramazan Topaça, who grazes his animals in the highlands of Akseki and also practices beekeeping in the town of Gebece in Antalya's Manavgat district during the summer, and Mehmet Kara, a beekeeper in the Akseki district, track bees they see far from town to wild hives.

Clever creatures, the bees often establish hives in hard-to-reach places, sometimes even among the rocks in the 2,000-meter (6,560-foot) Taurus Mountains; other times, they utilize convenient spots, like the hollow spaces of decaying trees.

Speaking with Ihlas News Agency (IHA), Topaça explained: "Every year I come from the Gebece district of Manavgat to the highlands of Akseki to graze my animals. In July and August, when the bees first venture out, I follow them to find their hives.

"They are quite difficult to find. It is a dangerous and exhausting task. Sometimes I manage to find the natural hive by walking up to 6 or 7 kilometers, or two or three hours a day. We often have to climb steep terrain."

The beekeepers start tracking the bees in August and determine their location. They then revisit the hives in September or October.

"In September, when the flowers are no longer in bloom and the honey is ready, we collect it," Topaça said.

"It is not easy to track the bees in the high cliffs at the summit of the Taurus Mountains. We often build scaffolding from wood we collect nearby to reach the honey nestled in the cliffs. Sometimes we have to climb as high as 5-10 meters. It can be pretty dangerous.

"Other times we find it in the cavities of dead trees in forests. We don't know how much honey we will find when we follow the bees. It all comes down to luck," he added.

For hives nestled in narrow crevices, extracting the honeycombs can be challenging, Topaça said. "If they are huddled down in a high rock face, we build scaffolding and break the rock face with a sledgehammer."

"Sometimes we find 5 kilograms, sometimes 40-50 kilograms of honey per year. But what we do collect is completely organic," he said.

After collecting the honey, I transfer the runaway bees into a hive. I don't harm the bees," he added. The colony is gently transferred by finding the queen and placing her in a honey super, their new home. The rest follow her into the box on their own.

Through tracking, the beekeeper said they find around 10 hives a year. However, sometimes despite all their efforts, the hives they track down turn out to be full of empty honeycombs.

"It isn't easy. The bees often sting us, but I love this profession because I am used to it," he said. "It is completely organic, and the honey promotes healing."

The high quality of the honey in its pure organic form has become quite popular. Though there are many varieties of high-quality honey produced in Turkey, the beekeepers said they have regular customers every year for the organic version despite the higher price tag.