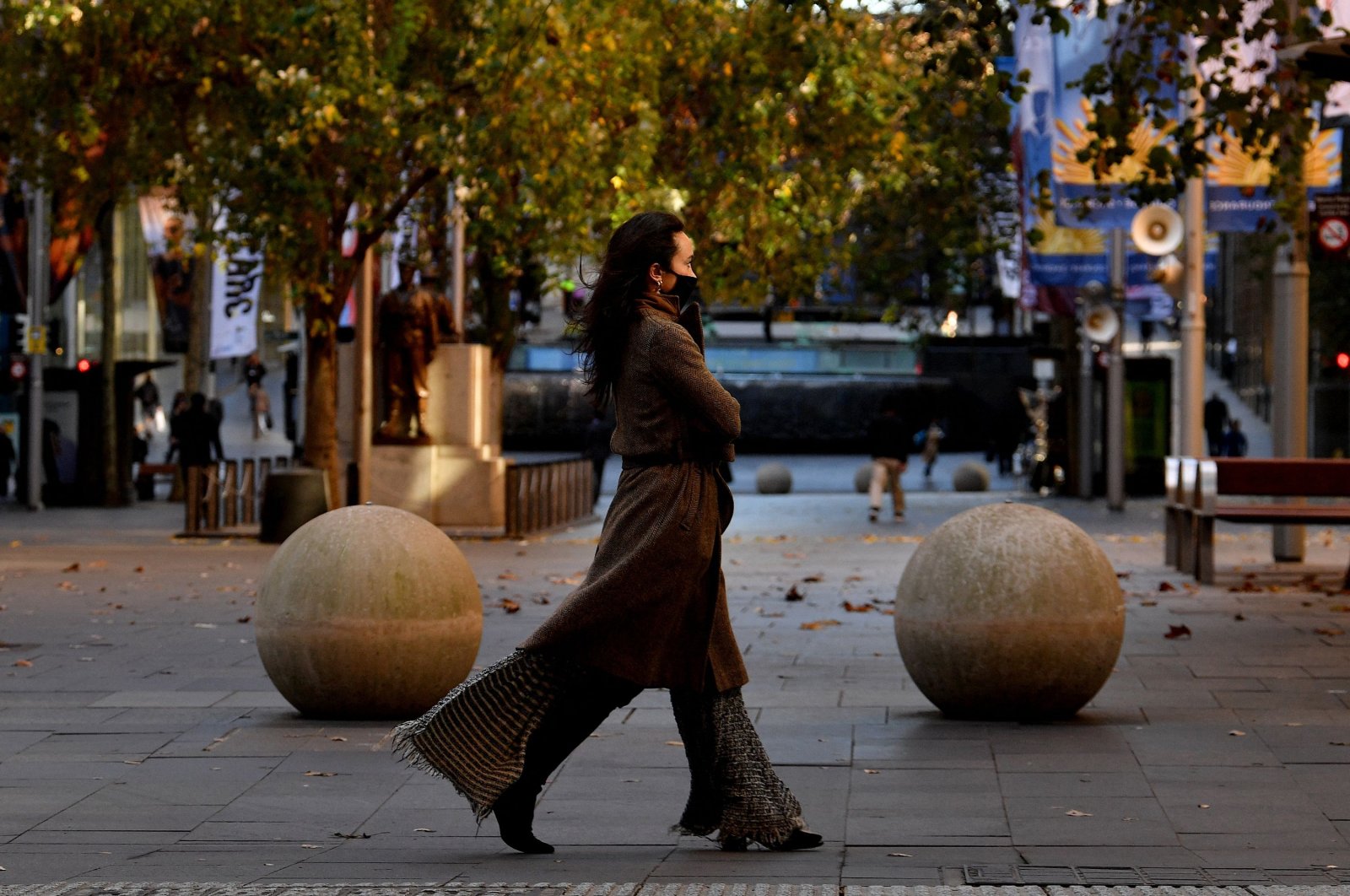 A woman wearing a face mask walks along a street in the central business district of Sydney as authorities locked down several central areas of Australia's largest city to contain an outbreak of the highly contagious delta variant, Sydney, Australia, June 25, 2021. (AFP Photo)
by REUTERS Jun 27, 2021 12:05 pm
RECOMMENDED

This week's roundup of the latest scientific research on the novel coronavirus and efforts to find treatments and vaccines for COVID-19 suggest that poor sleep history could be linked with more severe COVID-19 and that brain inflammation were seen in people who died from COVID-19.

The brain inflammation and impaired "brain circuitry" seen in people who die of COVID-19 look a lot like what doctors see in the brains of people who die of neurodegenerative conditions such as Alzheimer's disease and Parkinson's disease, researchers reported on Monday in the journal Nature.

Analyses of brain tissue from eight people who died from COVID-19 and 14 others who died from other causes showed "striking changes" in the COVID-19 patients' brains, Stanford University researcher Tony Wyss-Coray told Reuters. His team at Stanford, with colleagues at the University of Saarbruecken in Germany, analyzed thousands of genes in each of 65,309 individual cells taken from the brain-tissue samples. Genes involved with cognition, schizophrenia and depression were more often "turned on" in the COVID-19 patients' brains, they found.

"There also were signs of distress in neurons in the cerebral cortex, the brain region that plays a key role in decision-making, memory and mathematical reasoning," the researchers said in a statement. "These neurons ... form complex logic circuits that perform those higher brain functions."

Wyss-Coray said his team could not find the virus itself in the brain, which suggests that "virus infection in the rest of the body could be enough to cause neurological symptoms, even in people who do not die from the disease." The findings, Wyss-Coray noted in a statement, "may help explain the brain fog, fatigue and other neurological and psychiatric symptoms of long COVID."

Poor sleep habits may be linked with higher risk for severe illness in patients with COVID-19, according to Harvard University researchers. They analyzed survey responses from more than 46,000 participants in the long-term UK Biobank study, including 8,422 who tested positive for COVID-19. Participants had answered questions from 2006 to 2010 about sleep duration, daytime sleepiness, insomnia and body clocks.

For the new study, based on their responses, the researchers assigned scores ranging from 0 to 6, with higher scores indicating multiple poor sleep "traits." In participants with COVID-19, poor scores were associated with higher odds of death. This was true even after researchers accounted for issues known to be risk factors for poor COVID-19 outcomes such as sleep apnea, obesity and smoking, they reported on Friday in the journal Clinical Infectious Diseases. Even people with two occasional or one frequent poor sleep trait appeared to experience higher risks for hospitalization and death, although the difference was not statistically significant and more study is needed to confirm the finding, the researchers said.

Poor sleep affects the immune system and blood clotting, both of which are key to the body's fight against COVID-19, and "tracking sleep behavior may have importance in identifying those at increased risk for COVID-19 mortality and hospitalization," the authors said.

Most COVID-19 antibody drugs that are approved for emergency use in the United States – and some that are still in development – are likely to protect against variants of the novel coronavirus, new data suggests. In test-tube experiments, and in mice and hamsters, researchers exposed the antibodies, alone and in combinations, to "engineered" versions of mutated virus and to actual virus obtained from patients infected with alpha, beta, or gamma variants – first identified in Britain, South Africa and Brazil, respectively – or variants first seen in New York, California or India.

Some individual drugs appeared to lose effectiveness against the variants in test tubes – but in the animals, low doses of most of the drugs, given in combinations, were protective, the researchers reported on Monday in the journal Nature. Another advantage of the combinations is that they "seemed to prevent the emergence of resistant viruses," study co-author Jacco Boon of Washington University School of Medicine in St. Louis said in the statement. "Resistance arose with some of the monotherapies, but never with combination therapy."