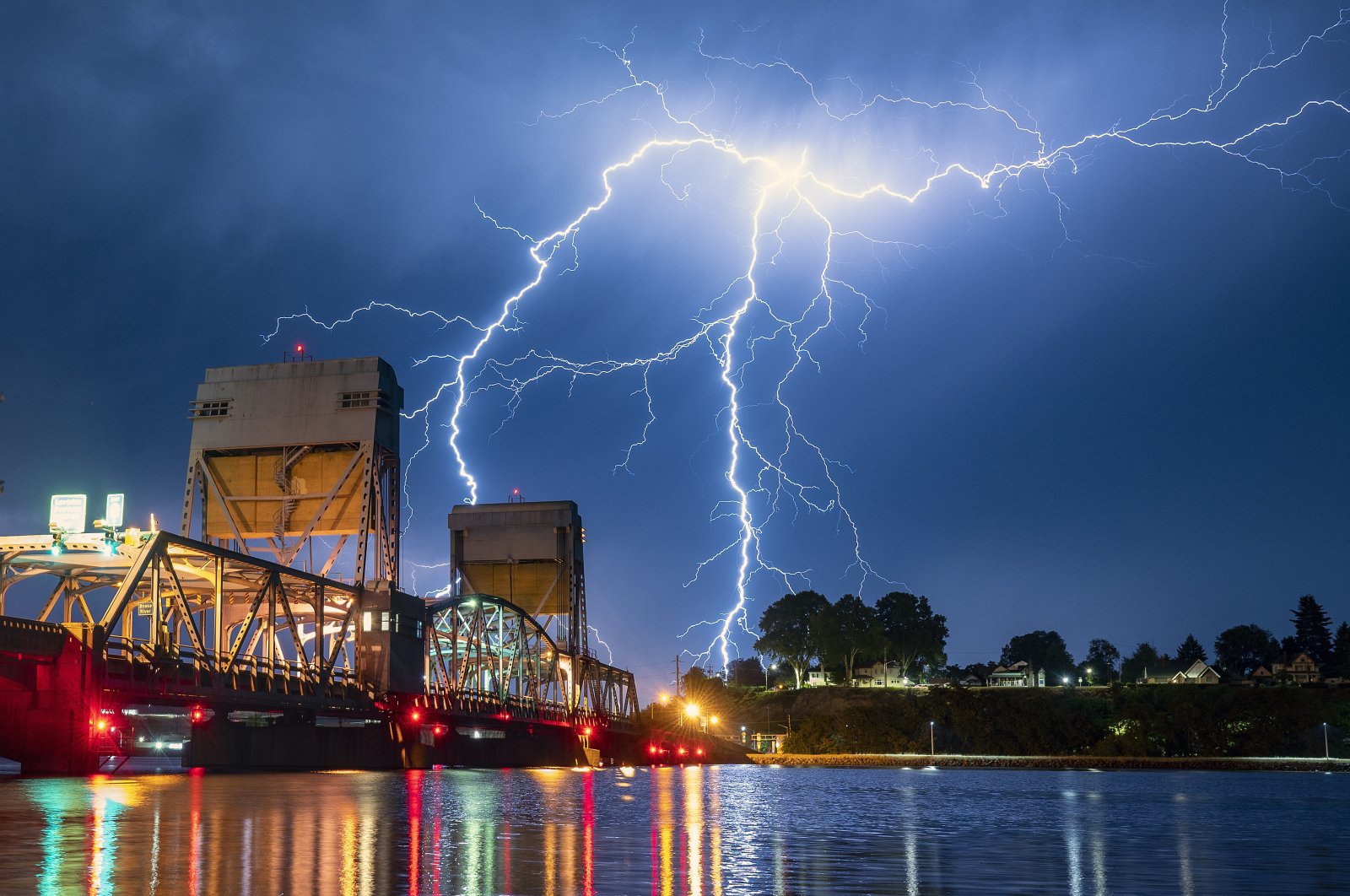 A bolt of lighting strikes over Lewiston, Idaho, behind the Interstate Bridge that spans the Snake River into Clarkston, Washington, U.S., July 1, 2021. (Lewiston Tribune via AP)
by Reuters Jul 17, 2021 9:19 am
RECOMMENDED

A thunderstorm is a rare Arctic phenomenon that unleashes lightning bolts, so one can imagine the shock of meteorologists when three successive storms swept the Arctic from Siberia to the north of Alaska. Such events will become more and more common as global warming continues to affect the planet, say scientists.

"Forecasters hadn’t seen anything like that before,” said Ed Plumb, a National Weather Service meteorologist in Fairbanks, speaking about the storms that started Saturday.

Typically, the air over the Arctic Ocean, especially when the water is covered with ice, lacks the convective heat needed to generate lightning storms. But as climate change warms the Arctic faster than the rest of the world, that is changing, scientists say.

Episodes of summer lightning within the Arctic Circle have tripled since 2010, a trend directly tied to climate change and increasing loss of sea ice in the far north, scientists reported in a March study published in the journal Geophysical Research Letters. As sea ice vanishes, more water is able to evaporate, adding moisture to the warming atmosphere.

"It’s going to go with the temperatures,” said co-author Robert Holzworth, an atmospheric physicist at the University of Washington in Seattle.

These electrical storms threaten boreal forests fringing the Arctic, as they spark fires in remote regions already baking under the round-the-clock summer sun. Boreal Siberia in Russia gets more lightning than any other Arctic region, Holzworth said.

The paper also documented more frequent lightning over the Arctic’s treeless tundra regions, as well as above the Arctic Ocean and pack ice. In August 2019, lightning even struck within 100 kilometers (60 miles) of the North Pole, the researchers found.

In Alaska alone, thunderstorm activity is on track to increase three-fold by the end of the century if current climate trends continue, according to two studies by scientists at the National Center for Atmospheric Research in Boulder, Colorado, published over the last year in the journal Climate Dynamics.

"What used to be very rare is now just rare,” said Rick Thoman, a climate scientist with the University of Alaska Fairbanks. As the parade of Arctic storms this week demonstrated, lightning is already appearing in unexpected places, he said. "I have no memory of three consecutive days of this kind of thing” in the Arctic.

With the sharp uptick in lightning, Siberia has seen increasingly ferocious forest fires in recent years. This week, the Russian army deployed water-dropping aircraft to douse flames burning some nearly 800,000 hectares (2 million acres) of forest, while the hardest-hit region of Yakutia has been in a state of emergency for weeks.

Meanwhile, mid-June lightning sparked one of the biggest fires this summer in Alaska, scorching more than 7,200 hectares of tundra about 200 kilometers north of the Arctic Circle in the Noatak National Preserve in the northwestern corner of the state.

Warming in the Arctic is also encouraging the growth of vegetation on northern Alaska's tundra, adding further fuel for fires, scientists said. By the end of the century, twice as much Alaska tundra could burn on a regular basis than was the norm in the past, with fires occurring four times more frequently, according to researchers at the International Arctic Research Center in Fairbanks.

On the water, the lightning is an increasing hazard to mariners, and vessel traffic is increasing as sea ice retreats, Holzworth said.

People can become lightning rods and usually try to get low for safety. That's tough to do on flat tundra or ocean expanse. "What you really need is to pay better attention to the lightning forecasts,” he said.