Aksaray, Day 5: Güzelyurt, the most overlooked spot in Cappadocia 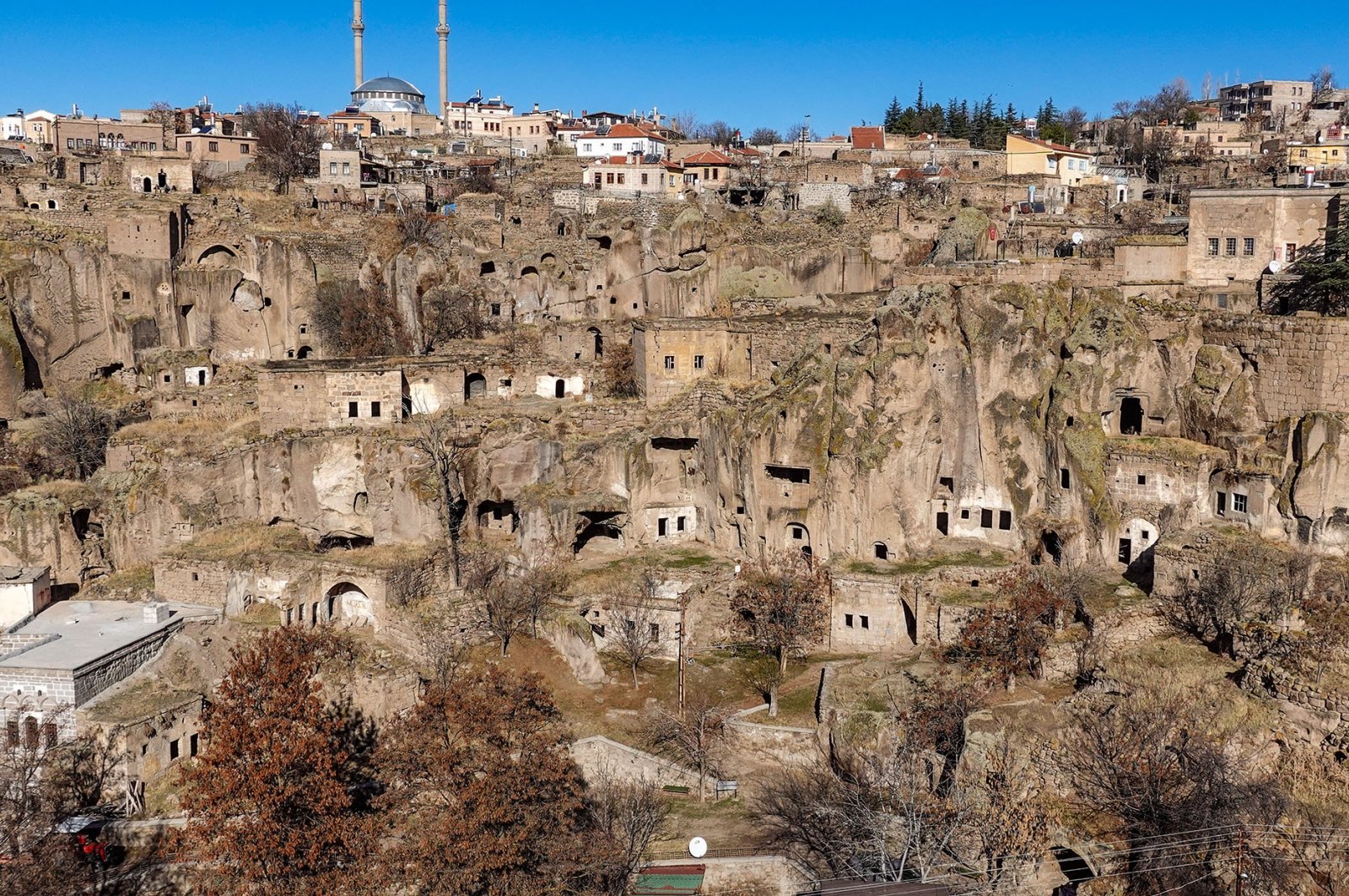 On our final day in the central Anatolian province, we will tour a historic town that is, perhaps, the most underappreciated site in the region

Undoubtedly, Ürgüp and Göreme are the most visited areas in Cappadocia. Every year, they attract millions of visitors from various parts of the world. With their intriguing history and unique landscape, they are among Turkey's top tourism points of pride and indisputably the most memorable vacation spots in this part of the world.

If we go a little to the west from Ürgüp and Göreme, however, the town of Güzelyurt is equally astounding with its underground cities, some 30 rock churches and other ancient sites. Sadly, this small community is devoid of tourists in comparison, and therefore it does not receive the attention it rightfully deserves.

But, what does this small town have to show? Where should you go in Güzelyurt? Without further ado, let’s start our tour.

With a population of about 12,500 people, Güzelyurt is a small rural area located in southeastern Aksaray. Due to its landscape and historical sites, Güzelyurt can also be seen as a mini Cappadocia.

The town’s name, Güzelyurt, means "beautiful country" in English. Considering its natural splendor, unique landscape and copious historical spots, it would be quite accurate to say that Güzelyurt does everything to live up to its name. Even beyond its ancient sites, there are hundreds of deserted dwellings from the Ottoman and Greek eras that are scattered across the streets of the town. If you were to remove the cars, you would feel like you had been teleported back in time.

The town has four main spots to visit: Monastery Valley, the Red Church, the High Church and Gaziemir Underground City.

After Ihlara Valley, which we visited in a previous article, Monastery Valley is the second-biggest valley in Cappadocia that was inhabited by the early Christians. The “Little Ihlara,” as it is informally known, is a 5-kilometer (3.1-mile) natural wonder where you’ll find 28 rock-hewn churches, only six of which can be visited, and two underground cities.

The history of Monastery Valley is pretty much the same as Ihlara Valley. Early Christians who were running away from violent Roman persecution settled here in the second century and lived secretly for hundreds of years. On account of its remoteness and isolated appearance, the Christians were able to practice their religion freely.

Due to the pandemic, the number of visitors has dropped drastically and most hotels here are currently closed. So when I arrived at around 1 p.m., the security guard told me that I was the first visitor of the day. For me, it was great because I had the whole valley to myself, but considering the ongoing pandemic, the thought of Turkey's crashing tourism income saddens me.

In a single article, it is not possible to write down all the attractions in Güzelyurt but here I'd like to share some of the notable spots you should not miss.

My first stop was the two underground cities that are located at the entrance to the valley. The lighting in the first was partially out of order. Although I tried to venture further down the dark tunnels with my phone’s flashlight, the moment I saw a cute bat family sleeping on the ceiling, I decided to not bother them by advancing further and instead headed to the second underground city.

The second city is a couple of times larger than the first. In comparison to the other underground cities in Cappadocia, the way the floors are connected in this space is quite different. Instead of horizontal tunnels, the ancient Greeks who built this one opted for vertical halls to connect the floors. As I was walking around the city for a moment I stopped, closed my eyes and thought, “That is how Indiana Jones must be feeling during his adventures!” In the end, I had the vast underground city complex to myself so I could comfortably walk around and explore the advanced architectural remains of the ancient Greeks.

A little further down from the underground cities, you’ll see the Church Mosque. This religious complex was built in the fourth century but once the Turks started ruling the area, it was converted into a mosque.

I found this to be a very impressive structure, for despite being 1,600 years old, the church looks as if it was recently built.

In the yard, you’ll find an underground sacred fountain that had been used as a holy spring for years. When I climbed down the stairs, I could not believe my eyes. The water was crystal clear even after hundreds of years. It had also risen all the way up to the stairs due to the rain. Had I not been careful, I would have stepped in the water as I was going down the fountain.

As I was walking up to Güzelyurt's Observation Deck, where you can see the most picturesque view of the town, I ran into the Sivişli Church, carved into the hill. In the past, it was known for hosting an annual religious festival on the first day of each November. As the historical account suggests, sick people and monks would stay up until the first rays of the sun started appearing on the horizon, and incessantly engage with religious practices. They believed that, by committing to this practice, the sick people would be healed.

Kömürlü Church is located at the end of Monastery Valley's path for tourists. Since no inscriptions were recovered, it is not known when exactly this double-floored church was built but it is presumed to have been built between the ninth and 10th centuries.

Getting to the church is a bit tedious. Unless you have a vehicle that is suitable to drive off-road, you will have to park in front of the Kalburlu Church, which is a couple of hundred meters before your destination. Then you will have to walk the rest of the way for about seven minutes. The locations of these churches are marked inaccurately online so I suggest that you stick to the coordinates provided in the article.

For me, the most interesting thing to see here was the old Greek writing, presumably carved by the Ottoman Greeks at the end of the 1800s and the beginning of the 1900s. I scanned the walls of the church and found lots of Greek writing dated to 1848, 1849, 1868, 1894, 1895 and 1910. It was fascinating to be able to see the carvings on the walls. It made me think that even as early as the 1900s, this church must have been actively used by the Greeks who had resided in the area.

Unfortunately, along with most of the Greeks living in Anatolia at the time, the Greek Orthodox Christians of Güzelyurt were caught up in the Turkish-Greek population exchange in 1923 following the Turkish War of Independence. They mainly resettled in the town of Nea Kalvari near the northern Greek city of Kavala, adopting Güzelyurt's former name in Greek (known as Gelveri by Turkish locals) for their new hometown. Turks/Muslims from Albania and the inhabitants of Thessaloniki and Komotini (Gümülcine) were resettled in Güzelyurt, but most émigrés later chose to settle elsewhere and left the town, according to accounts from locals.

Located in the middle of a vast plain 7 kilometers outside central Güzelyurt, the Red Church is one of the oldest in all of Cappadocia. Presumably, it was built in the sixth century on the order of Byzantine Emperor Justinian I to honor St. Gregory of Nazianzus (330-389 AD), who was a very respected Byzantine theologist and saint.

Supposedly, he came to the town of Karvali from Istanbul in the fourth century and spent his last days here in a priest's house.

Today, the Red Church is a very run-down spot. Unfortunately, over the years, some parts of the structure did not survive time or the destructive natural elements. The building was constructed using the red stones that are abundant in the area, which is how it got its name. In addition, the Red Church is also called the “Church with Crosses” on account of the cross carvings that you can see on every door and entrance.

What else to see in central Güzelyurt

Also known as Yüksek Kilise among the locals, the High Church is built on a massive boulder, located on a plain that is sandwiched between Mount Hasan, Monastery Valley and Ihlara Valley.

Even though the church was built in 1894 on top of the ruins of another church, the findings recovered during excavations in this very spot prove that this specific site was inhabited as early as the Bronze Age. Moreover, many artifacts dating back to the Hittites and ancient Romans were discovered in the area. As a result, we can say this is one of the oldest continuously inhabited places in Anatolia.

When I entered the church, for me, it was a little disenchanting to see that all of the frescoes and wall paintings were gone, with only plaster remaining on the walls. After covering the church, I headed to the residential unit that stands on the church's left. The small cells in this structure were used by monks as dwellings in the ancient eras.

Visiting the High Church is free of charge.

Despite the fact that it was just discovered in the early 2000s, Gaziemir Undeground City quickly secured its place as one of the most beautiful sites in Cappadocia. Apart from its residential purpose, the structure was also used as an underground caravanserai, which makes it stand out among the other underground cities in the area.

Gaziemir Underground City is located 20 kilometers from central Güzelyurt, in the village of Gaziemir. In my personal opinion, it is a must-see site.

I strongly suggest you add Güzelyurt to your itinerary. Once you are there, you will be marveled by the number of historic sites, the beauty of the settlement and how deprived of visitors this town is, which in the era of COVID-19, makes it all safer.

And that concludes our Aksaray series. Wishing you all a safe week, and see you next time.