A surreal Western view on Erdoğan and neo-Ottomanism 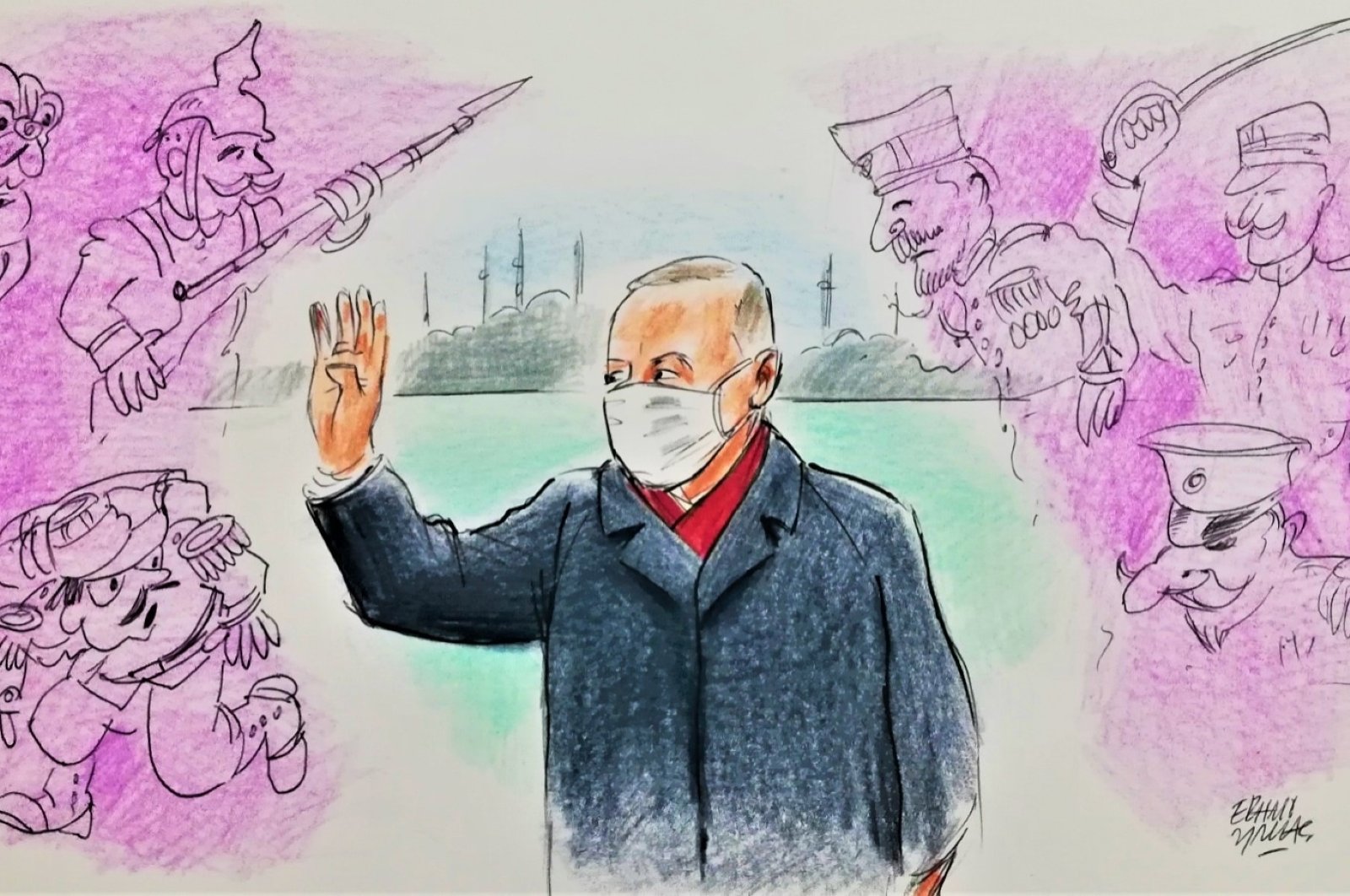 For almost a decade, President Recep Tayyip Erdoğan has been accused of trying to reassert the claims of the Ottoman Empire, the predecessor of the Republic of Turkey, in regions ruled by the Ottomans in the past. Anti-Erdoğan pundits often make references to the concept of “neo-Ottomanism” when discussing contemporary Turkey and in their analyses of the country's foreign policy.

The term “neo-Ottomanism” can be traced back to 1985 to David Barchard, who was a correspondent for the Guardian and then the Financial Times in the 1970s and 1980s in Turkey. Barchard coined the term in a Chatham House paper examining the ties between Turkey and the West.

Interestingly, “neo-Ottomanism” was first used in reference to economic reforms, technologically advanced initiatives and the active foreign policy of late President Turgut Özal. Özal became prime minister in the 1983 elections, held three years after the 1980 coup d'etat in which the military junta executed 50 people and some 500,000 were arrested.

Özal is still criticized for being a “neo-liberal” leader by the political leftists in the country, primarily by the Kemalists, and for his Western-oriented foreign policy. It is peculiar that a leader like Özal, who shifted the traditional passive, hesitant and insular Turkish Kemalist foreign policy, was depicted as a neo-Ottomanist dreamer outside of the country.

Was the Özal era characterized as a period of neo-Ottomanism because Turkey began to engage with alienated states on the Turkish periphery in a move to gain independence as an international actor while remaining a committed Western ally? This question must be noted.

Like in the Özal era, Turkey under Erdoğan has undergone critical economic and social reforms. Public services, health care reforms and big infrastructure projects including bridges, airports and power plants have been succeeded by military investments and the funding of advanced technology, among other major developments.

As a determined leader who managed to achieve political and economic stability once elected prime minister in 2002, closing the chapter of political deadlock that had plagued Turkish society in the 1990s, he has consistently been attacked by Kemalists within the country for his efforts to improve ties with the Western world.

Erdoğan's Justice and Development Party (AK Party) has been central to many conspiracy theories, including being a part of the "Green Belt Project," allegedly implemented by the U.S. in the 1970s under President Jimmy Carter to support extremism to fight atheistic communism.

Kemalists in Turkey have maintained their claim that Erdoğan was chosen to lead “the Greater Middle East” project, based on the eponymous political term introduced in a 2004 paper by the Carnegie Endowment for International Peace.

In anti-Erdoğan circles, whether it be the supposed leftists, the ultra-nationalists or the Kemalists, the majority view their anti-Western attitude as a point of pride, alleging that the project in question plans to reshape the map of the Middle East and North Africa (MENA).

They purport that the project, also referred to as the "new Middle East," is a U.S. construction with iniquitous intentions given that in 2006, U.S. Secretary of State Condoleeza Rice stated that a "new Middle East" would be achieved through "constructive chaos" during a joint news conference with then-Israeli Prime Minister Ehud Olmert on the outbreak of the 2006 Lebanon war.

The AK Party is widely considered a "conservative" party within the country but accused of being "authoritarian" abroad.

To begin with, conservatism in Turkey relates to religion, with people being classified as moderate, traditionalist or hardliners.

Turkey's definition of conservativism strays from the global understanding of the term pertaining to those adverse to change. The AK Party's interpretation of the term has been linked to cultural and traditional issues, including respecting the religion of society and recollecting the history of Turks who began to settle in Anatolia in the early 11th century.

The AK Party describes itself as a “socially conservative democratic party,” and is considered the party to have carried out the most reforms in Turkey's history through its unorthodox, broad-minded, progressive policies and revolutionary initiatives.

For example, the recent remarks of Kemal Kılıçdaroğlu, the chairperson of the main opposition Republican People’s Party (CHP) founded by Mustafa Kemal Atatürk that describes itself as "a modern social democratic party," could be considered a confession of the party's Kemalist ideology.

During an online meeting with prominent figures from religious circles organized by Istanbul Metropolitan Municipality (IBB), Kılıçdaroğlu told his audience that “you call yourself conservative, but you are wrong. The real conservative party is the CHP, because it resists change.”

Kemalism is in fact a form of conservative nationalism that endorses and secures the established principles of the Turkish state, such as strict appliance of laicism, which was chosen in place of secularism to organize state policies toward religion.

It was designed to detach the new Turkish state from its Ottoman predecessor, sweeping the history of Turks up until the War of Independence started in 1919. Right after the foundation of the young state, every single link that might have bound the Turkish republic to its Ottoman heritage was cut.

In addition to that, women who wear headscarves were banned from working in the public sector in a country where more than 90% of the population is Muslim. The ban was expanded to cover nonstate institutions as well as some public venues.

Women and girls wearing headscarves were not allowed to enter universities. The armed forces maintained a vigilant watch over Turkey’s political laicity, which was a keystone among the country’s founding principles.

The military had an unshakable influence over Turkey’s domestic and foreign politics that did not allow for a soft transition from hard-line laicism to secular rule, intervening in Turkish politics on a number of occasions.

If laicism was one of the two main pillars of Kemalism, nationalism was the other. The “millet sistemi" (people's system) of the Ottoman Empire recognized different ethnic groups and minorities as part of the country.

Although Islam was the official religion, the empire was a multiethnic state home to many religions. Given that Kemalists wanted to be rid of the Ottoman political structure, a nation based on the country's ethnically Turkish core was pursued above all else.

The implication of the Kemalists' brand of nationalism was that it sought to create a state catering to the Turks, in contrast to the blend of ethnicities in the Ottoman Empire. All minorities in the country felt the impact of the nationalist policies, particularly the Kurds for whom the use of the Kurdish language, traditional dress, folklore and names were banned.

On top of the bans, the Kurds were robbed of their identity, being categorized as "Mountain Turks" by the Turkish establishment at the time.

The AK Party has put up a fight against the restrictions on religious and ethnic freedom in Turkish society. It was not easy for the party to go up against Turkey's old establishment which countered their reforms, including the breaking of ingrained taboos such as the lifting of the ban on the Kurdish language and the headscarf.

In 2008, for instance, a court case attempted to shut down the AK Party and ban its members from politics. The request did not pass by just one vote, with only six judges ruling in favor when seven were required to enforce the ruling.

Erdoğan was imprisoned for four months when he was Istanbul mayor in 1999 for inciting religious hatred after reciting a poem by Ziya Gökalp, and the now-president believed his time in the political arena was over once he was released.

Having survived a string of attempts by Turkey's old guards to overthrow him over the course of almost two decades, Erdoğan rose from a local leader to a national one before becoming a popular figure in the international arena.

It is worth noting that, ironically, Gökalp was a figure who rejected Ottomanism in favor of Turkish nationalism and his works were particularly influential in shaping the development of Kemalism.

Erdoğan is a Muslim leader and does not hide his religious identity. Even though he is depicted as a “hardliner” among anti-Erdoğan circles, he actually favors secularism. When he visited Egypt after the Jan. 25 revolution in 2011, he called on Egyptians to adopt a secular constitution.

“Do not be wary of secularism. I hope there will be a secular state in Egypt,” he said.

Erdoğan wants to reconstruct the historical links between the Republic of Turkey and its predecessor, the Ottoman Empire, hearkening back to the country's past in the Seljuk Empire era. Erdoğan's goal is a simple one: our history.

The majority of Turkish society is eager to embrace its past, which has even been rewritten in schoolbooks to detach the people from their roots.

The public is aware of the situation and fond of Erdoğan’s policy to make peace with the ancestors of Turkey.

Meanwhile, following the start of the Arab protests in 2011, Erdoğan’s policies toward countries like Syria, Egypt and Libya mostly aimed at protecting Turkey’s interests but also advocated for the people’s rights against putschists and dictators, contradicting the U.S.' long-term projects in a period of time.

Subsequently, the accusations of Erdoğan having "neo-Ottomanism" ambitions began.

Additionally, Erdoğan continued to battle terrorist organizations such as the PKK and Daesh through ground operations in Syria and eradicated the Gülenist Terror Group (FETÖ), which had infiltrated Turkey's state infrastructure in a bid to take over the establishment. He also survived FETÖ's bloody coup attempt in 2016.

The circles that want Erdoğan gone have continuously portrayed him as an authoritarian leader with ambitions of becoming the "new sultan." His policies protecting Turkey's interests and his resistance to pressure, particularly from Turkey's NATO allies, have secured his place in the headlines, accusing him of being an “ultranationalist” leader with “neo-Ottoman” visions that create regional instability.

It is true that nationalism has risen in Turkey compared to the last decade, specifically among the supporters of the AK Party, and anti-Westernism has increased thanks to Turkey’s Western allies having alienated the country in hard times. And yet, Erdoğan still says Turkey is part of Europe, but has underlined that the country won’t tolerate the “attacks.”

Today, Erdoğan has become accustomed to being accused of pursuing a foreign policy of "neo-Ottomanism." In fact, the charge has only made him more popular in the eyes of the Turkish public who are at peace with their roots, with many people in the country identifying with both Erdoğan and the Ottomans.

The increased attention being given to the "Ottoman era" can be attributed to smear campaigns. Movies, TV dramas, book and articles about the history of the Ottoman Empire are being consumed now more than ever.

With Erdoğan being accused of wanting to be a "modern-day sultan," a depiction used to elicit fear of the president, people are now asking which of the empire's 39 sultans Erdoğan most resembles and as they try to establish what characteristics the sultans and the leader share.

To be honest, I have someone in my mind already but I think that topic is deserving of its own article. We'll pick it up from here in my next column.