Democracy: The strongest weapon against US imperialism 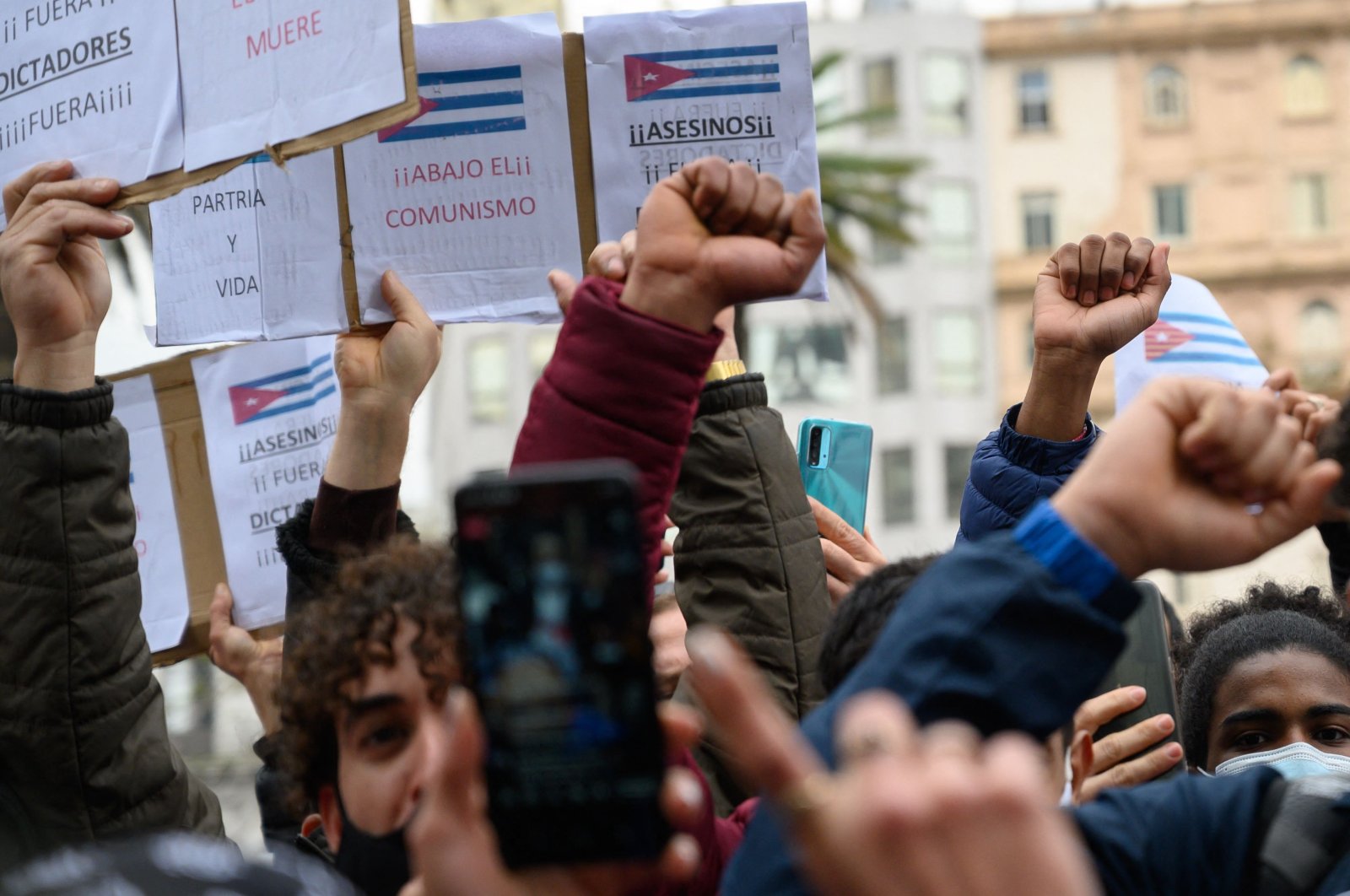 Cuban residents in Uruguay demonstrate against the Cuban government of President Miguel Diaz-Canel at Independence Square in Montevideo, July 13, 2021. (AFP Photo)
by Melih Altınok Jul 15, 2021 12:05 am

Currently, the streets in Cuba are shambolic. Footage from the country shows pro-change demonstrators turning over communist party members' cars on the road.

Miguel Mario Diaz-Canel Bermudez, who assumed the seat after Raul Castro, who took over the presidency from his brother Fidel, called his supporters to the streets in response. Bermudez says the United States has pursued a stifling economic policy to provoke a "social boom" triggered by violent street demonstrations in Cuba. He reiterated that the U.S. sanctions prevent meeting the necessary needs in the field of food, medicine and energy.

It is no secret that the U.S. has been dealing with the "socialist crocodile" right next to its shores since the Cold War years. As everyone who has visited this island country, I have observed the social problems experienced in Cuba due to the heavy U.S. embargo.

Beautiful historical buildings that have collapsed due to negligence cannot be repaired. There are frequent power cuts. Cars are antiques... Salaries are ridiculously low... It's as if Cuba was frozen in the 1950s.

The social life in Cuba, which resembles a giant movie set, is undoubtedly a tremendous experience for us tourists. But not so for those who live in the country neighboring the U.S., especially young people. Finally, I remember that whoever I talked to in Cuba – where I went before Fidel Castro died – covered their mouths with their hands and said, "We don't know if he's alive, but after Fidel, it's over." Faith in the dynastic type of socialism that had ruled the country since the 1959 revolution had hit rock bottom.

In my opinion, the fact that Raul Castro voluntarily left the seat last April was a sign of this despair to an extent. He also agreed that without Fidel Castro's charisma, it would be impossible to maintain the illusion that convinced Cubans to live by 1950s standards in the 2020s. The "collective will" of the Communist Party, which came under the rule of bureaucrats after the legendary Fidel, could not have had such a capability.

Therefore, to criminalize the demands of patriotic Cubans to integrate into the world with stereotypes such as "U.S. collaboration" would be to escape reality.

Mr. Bermudez should try to understand how rational the public finds this ideological war that they paid for instead of emphasizing the U.S. pressure that no one is in denial of. Because not believing that the choice of socialism is the only condition for independence can no longer be a "crime" in this age, while the demand for free and general elections, which was minimal even in the last century, cannot be labeled as "marginal" either.

Turkey is an example

I am writing these lines as a journalist of a country that eliminated a U.S. intervention disguised as a military coup attempt only five years ago.

Turkey would not have been able to write this epic of independence that will set an example for all oppressed societies if there had not been a politician elected by the majority of the people, as President Tayyip Erdoğan, in power on July 15, 2016. The civilians on the streets who stood in front of the tanks of the FETÖ putschists – who would later take shelter in the U.S. – were so brave because they believed that their will paid the price.

Again, the ballot box and democracy will be the most effective weapon of Cubans against U.S. President Joe Biden and U.S. imperialism, who meddled in their domestic affairs as "remarkable progress."

I am sure that the honorable Cubans, with whom I see friendship, sincerity, and kindness at every meeting, will discuss in peace and establish the most suitable management model in their country. If not today, then tomorrow...

Our hearts are with them.