Feeling sorry for Suu Kyi? Time to worry about Rohingya 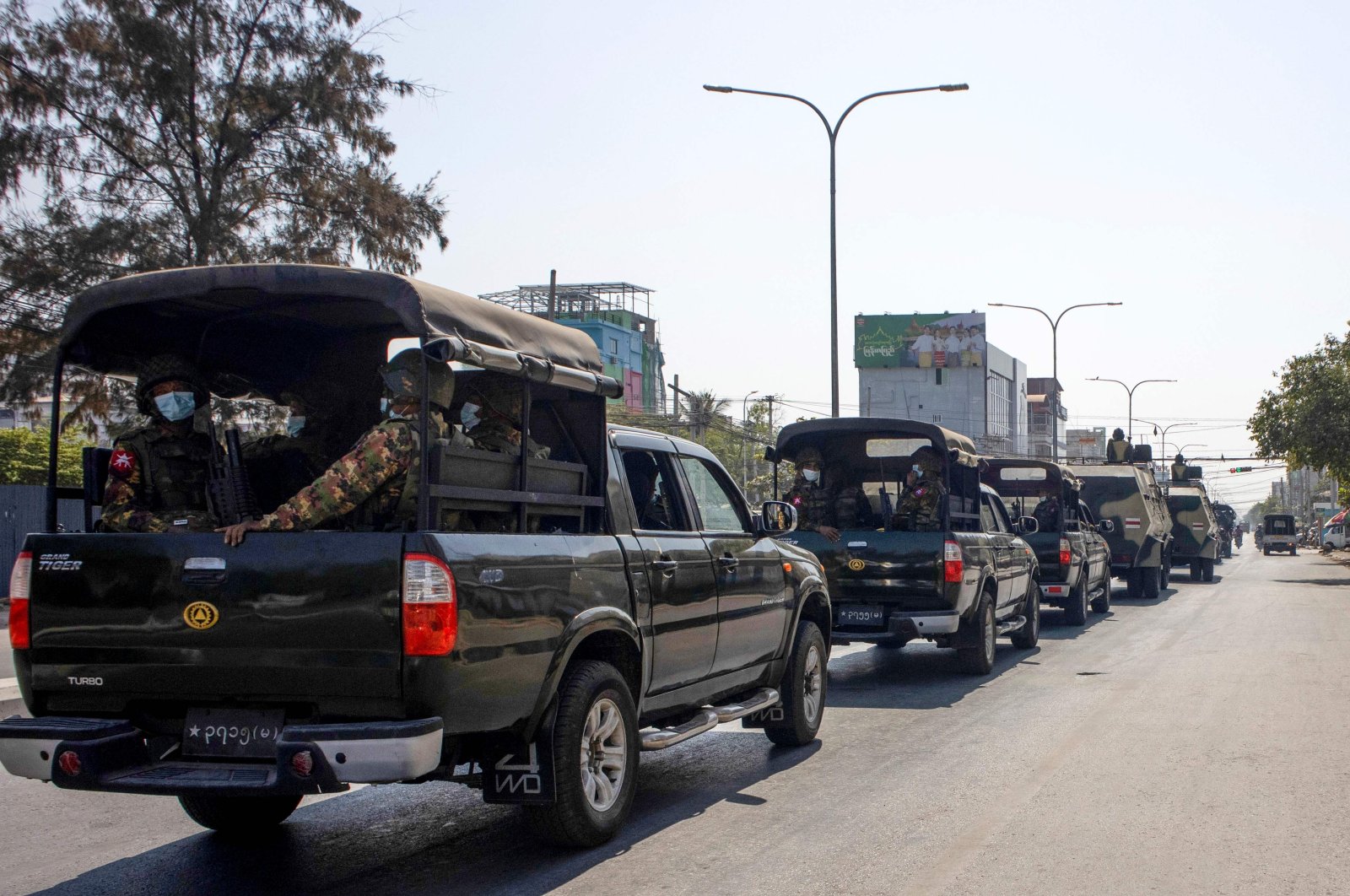 This week, Myanmar, a southeast Asian nation of more than 100 ethnic groups, bordering India, Bangladesh, China, Laos and Thailand, woke up to the news that the military had seized control of the state. The country’s leader (the official title is State Counsellor), Aung San Suu Kyi, her close ally, Myanmar’s President Win Myint, and members of her party, National League of Democracy (NLD), were detained by the Myanmar Army, which declared a yearlong state of emergency immediately.

No need to say that, almost all the coups are based on the claims of “corruption,” “fraud” and some similar accusations against the elected governments. What is alleged by the Myanmar Army, also known by its official name, the Tatmadaw, on the ground of the coup was not different.

Following the NLD’s landslide win in the November elections, which resulted in the ruling party gaining more than 80% of the votes, an even larger margin of the army of victory than in the 2015 election, the military alleged that Suu Kyi’s party was marred by voter fraud.

While the NLD won 396 of 476 seats in the parliament, the Union Solidarity and Development Party (USDP), the proxy party of the army, won only 33 seats in the elections.

The coup d'etat occurred the day before the first session of the parliament since the election was going to be held, which would have enshrined the election results by approving the next government.

The Commander-in-Chief of Defense Services of Myanmar, Min Aung Hlaing, who already has a significant influence over the politics, successfully maintaining the power of the Tatmadaw although a tentative democratic transition began in 2011, is the country’s president now.

Suu Kyi, the daughter of General Aung San. He, the hero of Myanmar’s independence gained from British colonial rule in 1948, had already been detained before and remained under house arrest for almost 15 years until 2010 due to accusations of “civil obedience” and become one of the world’s most prominent political prisoners.

In 1991, Suu Kyi was awarded the Nobel Prize, while still under house arrest being praised as “an outstanding example of the power of the powerless.”

Despite Suu Kyi calling for the protest after Monday’s coup, the streets of the country are calm in the aftermath of the coup, with troops patrolling all the cities and a nighttime curfew currently in effect.

Only some civilians are wearing black ribbons on their clothes and some medical staff wearing red ribbons, which means a silent protest. Colored ribbon movements had emerged before in Myanmar as symbols of people silently resisting the militarization.

But today, most of the people cannot dare to demonstrate since the memories of the bloody coups and the killings of thousands in the past are still in their minds.

After the 1962 coup in Myanmar, previously known as Burma, the country was ruled under martial law for 12 years. In this period, the military’s role in the national economy, politics and state bureaucracy was highly expanded.

Then again in 1988, the army took over the power again following nationwide protests, namely the 8888 Uprising, and retained power for 23 years until 2011, when it was transferred to the USDP, the proxy political party of the Tatmadaw as it was mentioned above.

Not only that but also internal conflicts in Myanmar are one of the other problems of the country. The junta that ruled Myanmar for half a century reckoned on mixing Burmese nationalism and Theravada Buddhism and heavily discriminated against minorities in the country where at least 100 ethnic groups are living.

It would not be wrong to say that the ethnic-based conflict in question is possibly the world’s longest ongoing civil war, having spanned more than seven decades.

The Myanmar government and the army have been fighting with 16 armed ethnic groups, some of which ask for self-determination, while others want independence, increased autonomy or the federalization of the country.

There were several attempts for long-lasting ceasefire and peace in the past, but all failed. Suu Kyi positioned a peace process as a major priority of the government to end the conflict after her NLD party came to power after the 2015 elections.

The move, which was welcomed by the world, was a key goal for Myanmar’s transition to democracy. Negotiations took place between the government and different armed ethnic groups, such as the Kachin Independence Organization (KIO) of Kachin people, the Karenni Army of Kayah State and the Shan State Army of Shan people.

It was not an easy path and the road to peace in Myanmar would not be a smooth one, as many knew that there are too many issues that needed to be resolved. After the military takeover, the inner conflicts will probably start again.

The real reason for the coup staged by the Tatmadaw under the command of Hlaing is not clear yet, but obviously, preserving the central role of the military in the country’s politics is the prime goal. Many countries, including the U.S., other Western states and Turkey condemned the coup in Myanmar, but unfortunately, China vetoed a U.N. Security Council (UNSC) statement.

In fact, Beijing had good relations with the NLD and Suu Kyi, but we can assume that China believes a worldwide condemnation and sanctions against the junta would only make things worse.

Most likely, the military government will get along well with China in the long term, even though they previously accused China of supporting some armed ethnic groups.

On the other hand, international pressure over Myanmar would not serve China’s interests in the region.

In the meantime, Hlaing was going to retire in July 2021 and the possibility of a more reform-minded military officer becoming the new commander-in-chief would be a problem for the Tatmadaw’s agenda.

In addition to that, there was a big risk for Hlaing personally, who would become weaker after his retirement: He would be held accountable for war crimes in Rohingya in various international courts.

While it is not clear that the junta will make a surprise and continue, or at least act as if it wants to continue the peace talks with the armed ethnic groups, it should be noted that Rohingya Muslims will definitely not be on the list.

In fact, the Rohingya were never among the ethnic groups, which were at the negotiation table of the so-called democracy icon Suu Kyi.

Moreover, the calls for Rohingya’s rights were harshly and repeatedly rejected by the NLD. You see that even using the word “Rohingya” is taboo in Myanmar when you visit the country and try to talk to the politicians or the people on the streets. In 2012, even the world “Rohingya” was banned by the government.

Even Pope Francis, who visited the country in 2017, did not publicly mention the Rohingya Muslims by name during his visit; instead, he waited to utter the word “Rohingya” until he went to neighboring Bangladesh.

The pontiff defended his decision saying that doing so “would have been a door slammed in the face.”

The pope argued that his political caution enabled him to have a private meeting with Hlaing, the architect of the brutal campaigns against the Rohingya, and tell him in person that the horrors of the past were no longer viable.

While China and Russia have always protected Myanmar from criticisms at the U.N. over the atrocities toward the Rohingya, Suu Kyi, who has been seen as a beacon for human rights, fell from grace due to her denials over the country’s crackdown against the Rohingya Muslims.

Sadly, most of the other ethnic groups generally ignored this Muslim minority and the public opinion toward Muslims is not so different from the government’s policies.

The Rohingya have been living in Rakhine, formerly known as Arakan, since the 18th century, but citizenship was denied to them in 1982. They are labeled as illegal immigrants by the Myanmar government.

Rohingya Muslims have faced persecution, severe discrimination, abuse and escalating violence because of their ethnicity and religion for decades. They are subject to arbitrary arrest, torture, slave labor, burning of their villages and rape.

I remember that, in 2009, a senior envoy from Myanmar to Hong Kong publicly branded the Rohingya as “ugly as ogres.” Unfortunately, you can come across many people in Myanmar, who don’t even see the Rohingya as “human beings.”

Long considered one of the world's most persecuted and least wanted peoples, the Rohingya people have no legal status in the primarily Buddhist country.

Not only does the army violently attack them, but also Buddhist monks provoke anti-Rohingya sentiments encouraging violent mob attacks in the Rakhine region.

For instance, the Buddhist-nationalist 969 Movement repeatedly calls for the annihilation of the minority. Horrific attacks that have been incited by anti-Muslim hate speeches and planned campaigns from time to time, have destroyed thousands of Rohingya communities and displaced well more than 750,000 people.

Human rights groups have many times called the violence against Muslims in Myanmar “ethnic cleansing.”

As international pressure mounted, the NLD had last year said that it was committed to the 2017 bilateral deal, which was unwillingly signed with Bangladesh, the neighboring country hosting hundreds of thousands of Rohingya Muslims at refugee camps in Cox’s Bazaar, over the repatriation of refugees to Myanmar.

Accordingly, the process was to start in the second quarter of this year. But now, after the military takeover, the future of the agreement, which was already not trusted by the Rohingya and seen as a trap, has also been marred with uncertainty.

As a journalist, I have covered wars. I have been in conflict zones and followed up on war crimes. I have met people who were the victims of abuse, rape, violence and torture. But nothing was like the suffering of the Rohingya Muslims.

They are stateless. They have become refugees in the neighboring countries which, to be honest, does not want to host them. They cannot secure shelter; they are struggling to get food and clean water.

They do not have clothes or shoes. Their homes and villages no longer exist. Almost all of them have lost most of their family members due to the mass killings.

They escape from being massacred with machetes. They just have poverty, misery, pain, trauma and tears.

The latest military coup in Myanmar will severely affect all the people of the nation and the future of the country for sure; however, the most horrific scenario will be written for the Rohingya. May God help them.