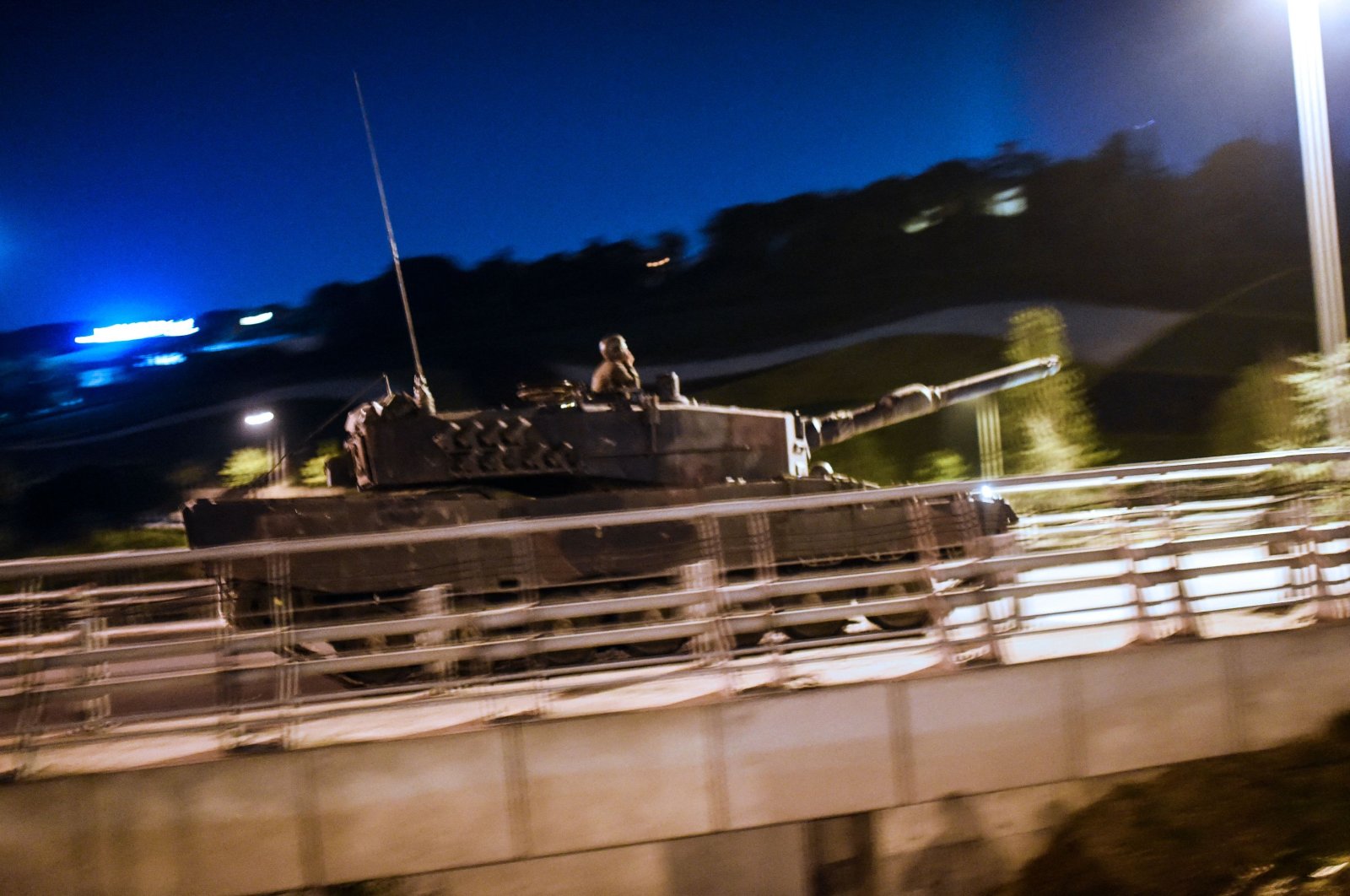 A tank drives past during a coup attempt by the Gülenist Terror Group (FETÖ) at the entrance of the Bosporus Bridge, later renamed July 15 Martyrs’ Bridge, Istanbul, Turkey, July 16, 2016. (AFP Photo)
by Burhanettin Duran Apr 08, 2021 12:05 am
RECOMMENDED

The democratic reaction to the coup-implied declaration by 104 retired admirals is crashing down like an avalanche. Writing the declaration in refined language does not eliminate the message.

The emphasis on survival, the veiled threat of reaction, the accusation that the nation is straying from founder Mustafa Kemal Atatürk's principles and revolutions, the criticism of an imaginary withdrawal from the Montreux Convention and its patronizing approach, using terms like "evaluated," all point to the admirals' inferring a coup.

There is a tangible fear about the potential “erosion of the Republic” and the arrogance of “the duty to protect and watch” expressed in a veiled manner.

Obviously, the retired admirals who still serve in the staff understand the true meaning of such a declaration released in the middle of the night.

The vague wording is deliberate and in order to benefit from the pretext of the “freedom of expression” and draw in support from opposition parties. The investigation run by the prosecutors' office will clarify all aspects of the declaration wholly.

We could perhaps be dealing with a statement that has been well thought out and modified several times. This declaration is clearly an attack on the country’s democratic will, but it takes the tradition of inciting a coup in writing to a new level. It is the country’s civic duty to provide the necessary democratic reaction to this arrogant declaration.

Somehow, Turkey, as a nation, fails to reach a consensus on two sensitive issues plaguing the country's politics and culture: coups and terrorism. This deadlock disables collective reaction.

With the dark memories of the 2016 coup attempt are still fresh in our memories, it is shocking that the admirals asserted such courage.

Our nation's inability to detect such danger shows how deeply rooted the coup-initiating genes are.

The most remarkably menacing part is that “otherwise, the Republic of Turkey, as seen in history, will have to face risks and threats to encounter the most dangerous events for its survival.”

I do not find this process normal. A process that started with 126 retired ambassador statements, followed by a statement by 104 retired admiral as well as the support given by former deputies.

A certain political climate is being established to gather the opposition to counter the Kanal Istanbul project and generate hostility toward the government.

The main opposition Republican People’s Party’s (CHP) “fake agenda” and "don't play the victim" responses are telling of the polemics to expect in the coming days.

Some CHP and Good Party (IP) members' support for the declaration has raised questions as to whether they had prior knowledge of the statement.

Moreover, there is an ongoing tendency to turn the reactions into "a problem of democracy."

It comes as no shock that the CHP has distorted the issue in such a manner considering the party officials described the events of July 15, 2016, as a "civilian coup."

I recently said we have entered the long two-year election process leading to the 2023 elections.

Due to the recent declaration, now there is a possibility that the process will be painful.

A new era is taking shape wherein Turkey will be subject to criticisms of its democracy and human rights, in the presence of the U.S. and EU.

Making a statement about the declaration, President Recep Tayyip Erdoğan denied the allegations implied in the statement.

In a particularly significant moment, Erdoğan pointedly highlighted the relationship between the CHP and putschists by emphasizing the historical background.

On the other hand, he asserted that the Montreux Convention was an important and valuable achievement at the time it was enacted.

Nowadays there is no such agenda but it could be discussed in the future if a platform in parallel with Turkey’s interests is established, he added.

Erdoğan added that the Kanal Istanbul project will strengthen Turkey’s sovereignty over the straits.

The declaration cannot be taken as an example of freedom of expression, he said and reminded that every coup in history began with such actions.

The president reiterated his proposal to draft a new constitution that would disable future coup attempts.