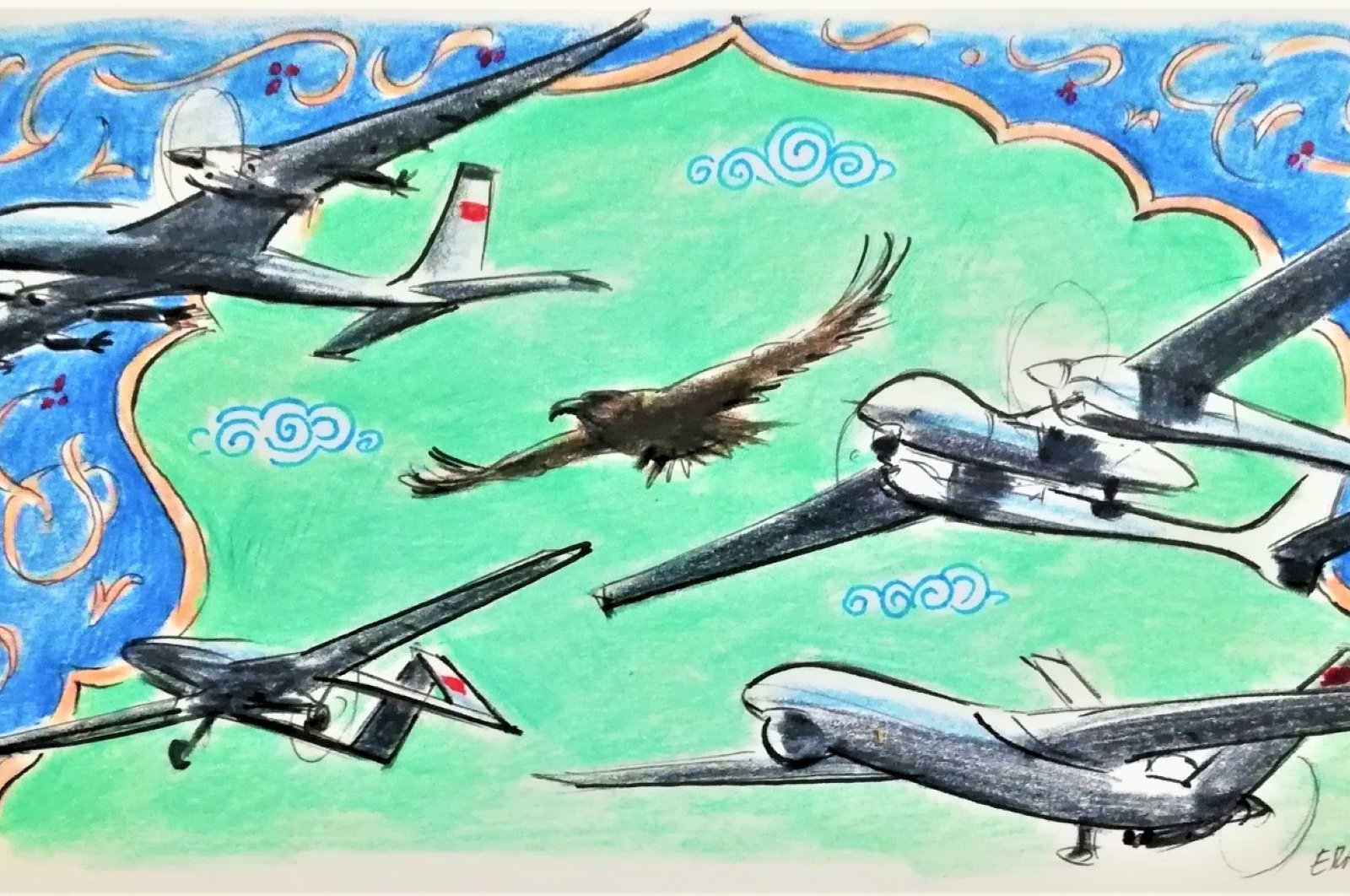 As I discussed in my previous column, the accusations claiming President Recep Tayyip Erdoğan is trying to resurrect the Ottoman Empire – statements that have become routine among Western political analysts regarding discussions about Turkey’s foreign policy –no longer carry the same weight as criticism.

Erdoğan and his supporters do not feel inclined to counter these arguments and are in fact undisturbed by the allegations of "neo-Ottomanism."

On the contrary, these charges have made Erdoğan more popular in the eyes of a lot of Turkish people, who want to make peace with their historical roots, including their Ottoman heritage. Almost every single link to the country's past was cut after the collapse of the empire and the foundation of the new Turkish state in line with the strict principles of the establishment, such as hardline laicism and Turkish nationalism.

The ink of the Treaty of Lausanne was still wet when the members of the Osmanoğlu family that ruled the Ottoman Empire for six centuries, the predecessor of the Turkish republic, were deported from the country's lands in 1924.

Twelve sovereign states of contemporary Europe, including the U.K., Denmark, Sweden, Belgium, the Netherlands and Spain, preserved their royal families due to their system of “constitutional monarchy,” giving the kings and queens a symbolic “head of state” status while in modern Turkey, the Ottoman royal family was declared a traitor of the new Turkish nation.

None of the dynasties of European empires were treated in such a manner. I am not saying that the new Turkish state should have been a monarchy instead of a republic, but the decedents of Osman, the founder of the Ottoman Empire, could have stayed in the country and lived as citizens instead of being sent into exile as personae non-gratae.

Sadly, most of them fell into destitution; some were even forced to work in manual labor to survive. Although they were allowed back into Turkey in 1974, only some of them returned out of fear of how they would be treated.

Those who came back were not given Turkish citizenship immediately and were followed by intelligence for a while.

Today, they feel safe and secure in their homeland, leaving behind the bitter stories of the past. No one can deny that they have always been respectful about the Turkish republic’s laws and that they live modestly.

The historians say that the Kemalist elite of the new republic erased Ottoman history and effectively silenced the Ottoman historiography, almost rewriting it, particularly the last centuries of the empire.

According to them, the new nation had to be the exact opposite of the multiethnic Ottoman Empire home to many religions, so the latter had to be discredited.

Over the decades, Turkish society has been inundated with stereotyped and unverified perceptions of their ancestors.

However, since the Turkish republic is a young state, many people who listened to stories of the past from their parents and grandparents have had not embraced the imposed perspective.

While the history of the Turks goes back to around 2000 B.C. when they first lived in Central Asia before spreading, they started to settle in Anatolia in the early 11th century.

The Anatolian Seljuk state was founded in 1080 and was the first Turkish state on these lands but declined with the Mongol invasion of Anatolia.

The Ottoman era, which descended from the legendary Oghuz Khan, was founded by Osman in 1299 and lasted for 623 years until the end of World War I.

After the Turkish War of Independence between 1919 and 1923, Turks founded the successor state: the Republic of Turkey.

Unlike most of his predecessors, Erdoğan did not ignore the legacy left by the Seljuks and the Ottomans and regarded the Turkish republic as a continuation of the empires.

As he started to break the taboos, showing that he does not want the nation’s history forgotten in the dusty pages of hidden history books, long-standing political controversies have come to the light inside Turkey.

In fact, it is ridiculous to deny the legacy of the Seljuks and Ottomans given that Turkey to this day is an open-air museum of their histories.

Without a doubt, from their architecture to traditions, Ottoman culture has always been alive among the people, no matter what the founding elite and their ideological followers argue.

Erdoğan presides over a country at the epicenter of the regional tensions and global rivalries, and the president is increasingly attacked by anti-Erdoğan circles because of Turkey’s regional policies, specifically after the start of the Arab Spring, accusing him of aspiring to assert the claims of the Ottoman Empire. Erdoğan said: “The Republic of Turkey, just like our previous states that are a continuation of one another, is also a continuation of the Ottomans. Of course, the borders have changed. Forms of government have changed ... But the essence is the same, the soul is the same, even many institutions are the same.”

The way he embraces the soul and the essence of the past – a not too distant past – touches the hearts of not only the Turks for who their history is a point of pride, but also many people who live on the lands which were once ruled by the Ottomans, too.

Even regional states such as Saudi Arabia and Iran criticize Erdoğan using the “neo-Ottomanism” argument. The criticism is sometimes made directly by politicians, sometimes using the media, but many polls reveal that Erdoğan has quite a lot of admirers in the region.

The increasing popularity of Turkish TV dramas, movies, books and articles about the history of the Ottomans is clear evidence that Erdoğan admirers view the Ottoman Empire favorably, ignoring propaganda efforts depicting the Ottoman era as a dark age.

So, it would not be wrong to say that the allegations of “neo-Ottomanism” are part of a smear campaign against Erdoğan that has boomeranged back on the accusers.

Today, the Ottoman era has become a popular subject as a result of the failure of the anti-Erdoğan campaign.

Meanwhile, with Erdoğan being accused of aspiring to become a “modern-day sultan,” a depiction used to elicit fear of the president, people are now asking which of the empire’s 39 sultans Erdoğan most resembles. They now examine Erdoğan's characteristics and try to draw parallels between the president and sultans.

The comparisons started with Selim I (Yavuz Sultan Selim), widely known as "Selim the Grim" in the West.

Selim was a conqueror without a doubt. Selim I dramatically expanded the geographical presence of the Ottoman Empire from the Middle East to the Balkans.

During his era, the Ottoman Empire grew by 70%. Following his conquests of Egypt, Syria and some parts of Persia, he was viewed as one of the most significant sultans of the empire, conquering the Muslims’ holy cities of Mecca and Medina.

After that, he earned the title of the "caliph," which means the leader of the Muslim world, paving the way for his successors to hold this pivotal title until the caliphate was abolished in 1924 by a decree, as part of founder Mustafa Kemal Atatürk’s strategy to replace the Ottoman Empire with the Turkish republic.

Despite only reigning for eight years between 1512 and 1520, Islam became central to Ottoman life, which is why the sultan is disliked by Westerners and detested by certain leaders in the Middle East due to his conquests.

Due to his Middle East policy that contradicted Turkey's NATO allies after the start of the Syrian crisis, Erdoğan was portrayed as Selim I and accused of wanting to be a conqueror.

The Iranian and Syrian regimes particularly focused on the resemblance given Selim I's conquests in Syria and Iraq.

The sectarian violence in Syria and Iraq, which was actually fueled by Shiite and Alawite vengeful rulers, was a chance to portray Erdoğan as a Selim I figure and push the argument that the Turkish leader wants to invade Syria.

The other sultan mostly compared to Erdoğan is, of course, Abdulhamid II. Abdulhamid II, who ruled the Ottoman Empire between 1876 and 1909, has always been a point of controversy between Turkish conservative Muslims and ultra-laicist republicans.

While the conservatives see him as the last defender of the Ottoman Empire and Muslim world who was unfairly deposed by the "Young Turks," members of a movement that worked to replace the Ottoman Empire’s absolute monarchy with a constitutional government, the latter group views him as an autocrat.

To be honest, there are a lot of conspiracy theories about Sultan Abdulhamid II, who was also called “the Red Sultan,” portraying him as an evil ruler.

Whether you consider him a despot or a sultan carrying out his duties, it is clear that he was actually an enlightened leader who tried to modernize the empire during hard times.

The conservatives in Turkey believe that Abdulhamid II was the victim of a plot staged by the newly founded Zionist movement with the help of Britain since he refused to sell the Palestinian lands.

They literally offered to pay off all of the Ottoman Empire's foreign debts in exchange for relinquishing Palestinian lands where the Zionists started the Jewish settlement and were planning to found a Jewish state.

Due to his determined stance against Israel’s illegal settlements and annexation of Palestinian lands, despite being under immense pressure and being made the subject of defamatory campaigns, Erdoğan's admirers liken him to Abdulhamid II, who is considered a champion of the Muslim world, although he was overthrown in the end and imprisoned until his death.

However, unlike Abdulhamid II, Erdoğan has survived a number of plots to overthrow him, including a bloody coup attempt.

This is why I think Erdoğan most resembles is another candidate: Mahmud II, who was known for his fight with the Janissaries, an elite infantry unit that threatened the state at the time.

In my next column, I will make a detailed comparison between Sultan Mahmud II and Erdoğan.