No such love! The story of Taj Mahal 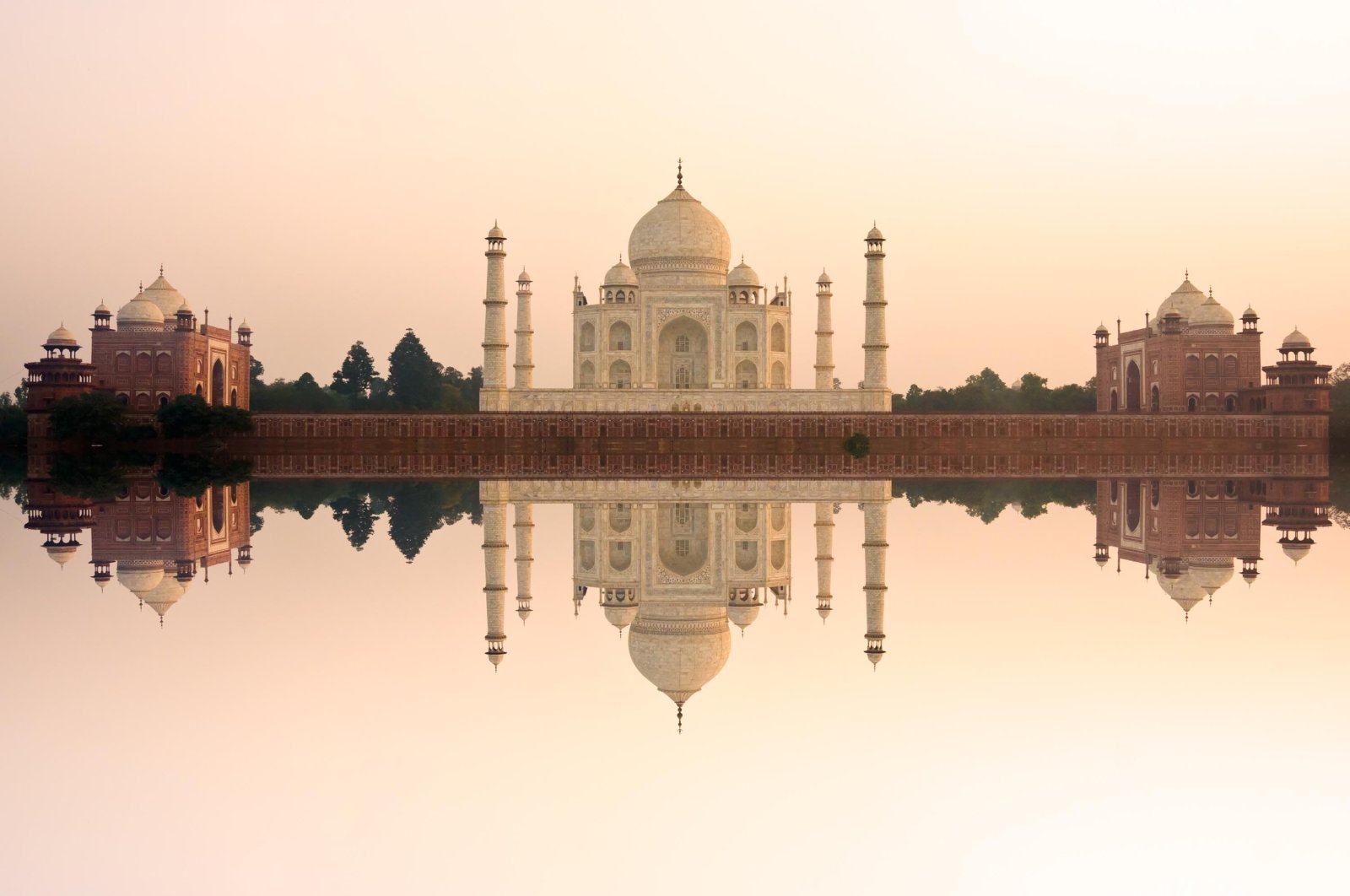 The Taj Mahal, chosen as one of the 'Seven Wonders of the New World,' is the fruit of a legendary love story. Countless people from all over the world visit this unique work built by Muslim Turks in India, but most are unaware of its history

Today, millions of people living in the Indian subcontinent, which includes states such as India, Pakistan, Bangladesh, Myanmar and Nepal, are Muslims. Here, Islam is the second largest religion relative to the population and it has played an almost essential role in Indian culture. Today, most of the historical artifacts popular with tourists in India were built by Muslim Turks.

Seven Wonders of the New World

India came in contact with Islam through Muslim Arab traders in the seventh century. But it was the Turks who really brought Islam to India. In the 11th century, the Ghaznavids dominated northern India. These lands were ruled by Muslim Turkish states.

In the 16th century, making a risky attempt, Babur, the grandson of the Turco-Mongol conqueror Timur, marched from Kabul to India, which his grandfather formerly occupied. He settled here with a small force and built an enormous empire that gifted humanity with unique artifacts. Babur Shah is one of the great figures of world history. He was the founder of a state and one of those rare rulers who wrote their memoirs. Babur's memoirs, called Baburname, were written in a very sincere language without concealing anything.

The Mughal rulers demonstrated a trait that is not known to everyone and, in fact, unexpected given their strong military identities. This feature is their incomparable devotion to their wives. The Taj Mahal, which was selected as one of the Seven Wonders of the World in 2007 and included in the UNESCO world cultural heritage list, is the fruit of such a romantic love. It is not clear why a novel has not been written or a movie has not been made.

People are divided into two...

English Lord Edward Lear said, "People are divided into two: those who have seen the Taj Mahal and those who have not." The Taj Mahal is a mausoleum built by the Mughal Emperor Shah Jahan, also known as Hurram Shah Jahan, for his beloved wife Mumtaz Mahal, or Arjumand Banu-Begum Mumtaz Mahal, in the city of Agra. It is the biggest and most beautiful monument erected in the name of love in the world.

Mumtaz Mahal's father, Asaf Khan, was a vizier from the Qaraqoyunlu Turkmen who ruled in Iran and Iraq. He came to India from Iran; he abandoned Shiism and became a Sunni.

Once upon a time, the nobles used to sell their handicrafts at a charity sale called Mina Bazaar and do good deeds with the money. Shah Jahan, who was a prince at that time, met his maternal relative, 20-year-old Mumtaz Mahal, here. He was fascinated by her beauty and intelligence. One of the greatest loves in history was born here.

Their marriage lasted 20 years. During this time, the shah did not look at any other woman. They had 14 children. Seven survived. Mumtaz Mahal died in 1631 while giving birth to her last child. Women who die while giving birth are revered in Indian culture.

This incident was enough to devastate Shah Jahan. The shah lost his sight. He asked an architect from Istanbul to build a mausoleum on the banks of the Yamuna River for his beloved wife. Isa Efendi, the student of the famous Ottoman architect Sinan and the architect of the Sultanahmet Mosque, was sent. Its foundation was laid in 1632 and it was completed in 22 years with 20 thousand workers working every day.

The transparent marble interior walls from Rajasthan are decorated with rubies, sapphires, diamonds, emeralds, agate, turquoise, mother-of-pearl and pearls. Surah Yasin was inscribed on the interior and exterior of the tomb by engraving black marble into the white marble. Four outward-slanting minarets were added to the corners so that they would not damage the building if it was hit by an earthquake.

Being a single piece of marble, the entrance door of the tomb is 33 meters (108 feet) tall, an elegant mosque on the left, a symmetrical mihmanhane ( guesthouse) on the right; the garden adorned with pools and the magnificent red stone exterior door fascinate people.

Although a greedy British governor put this magnificent building up for sale during the colonial period, it could not find a buyer due to the stock market crisis.

The color of mourning

Shah Jahan wanted to have a similar one constructed in black, the color of mourning, built next to the Taj Mahal for himself. In order to prevent this as it would incur a great expense for the treasury, his son Alamgir Aurangzeb deposed him and forced him to reside in the Agra Fortress. Shah Jahan, already embittered, did not object to this.

He spent his life watching the Taj Mahal without meeting anyone in the room, which was called the Müsemmen Burc (Octagonal Tower) because of its octagonal shape. On his deathbed, he had a mirror placed in front of him and continued to watch the Taj Mahal. When he died, he was buried next to his wife.

Now two lovers rest in their eternal sleep in a room where every sound is reflected seven times. Countless visitors from the seven corners of the realm also commemorate the two heroes of this distinguished love. The whole world bows in admiration before this magnificent work, which was built with knowledge, emotion, labor and wisdom four centuries ago.

Babur Shah also had a strange love story. He fell in love with his wife's sister. The religion of Islam allows a man to marry up to four women, provided that he acts fairly. But it forbids him from marrying two sisters at the same time. For this reason, Babur separated from his wife and married his sister-in-law. He was very saddened when his wife, Masuma Begum, whom he had taken a great risk to marry, died while giving birth to a child.

Hamida Begum, the wife of Babur's son Humayun Shah, whom she loved with such passion, had a magnificent tomb built in Delhi for her husband.

The devotion of his son Akbar Shah to his wife, on the other hand, is not very heartwarming. Akbar Shah married the daughter of his ally Rajput. Then he fell under the influence of a Hindu girl to such an extent that he abandoned his religion to found another. The Muslims, who had been tortured for 40 years, breathed a sigh of relief after his death.

However, their son, Selim Jahangir, whom they had pin their hopes on, dissapointed them. He married Nur-Jahan Begum, the Shiite daughter of a vizier of Iranian origin. The woman fascinated Jahangir with her exceptional beauty, intelligence and grace. She forced her husband to put pressure on the Sunnis. She provoked her husband against the famous mystic Sheikh Ahmed Sihrindi, known as Imam Rabbani. The weak-willed Jahangir imprisoned this great scholar for three years.

His son Hurram Shah Jahan rebelled against his father. Although he had many soldiers and most of his father's commanders were devoted to him, he could not win. He came to Sheikh Ahmed for his pray and support. The sheikh advised him: “Go to your father, kiss his hand, win his heart! He will soon pass away; the reign will remain with you.”

Shah Jahan listened to this advice. He ascended the throne shortly after his father died in 1627. Everyone breathed a sigh of relief. The genius Shah founded cities and had great works built. However, there is one that is one of the most known and visited places in the world today: The Taj Mahal. Shah Jahan's legendary love story is the most famous of all.