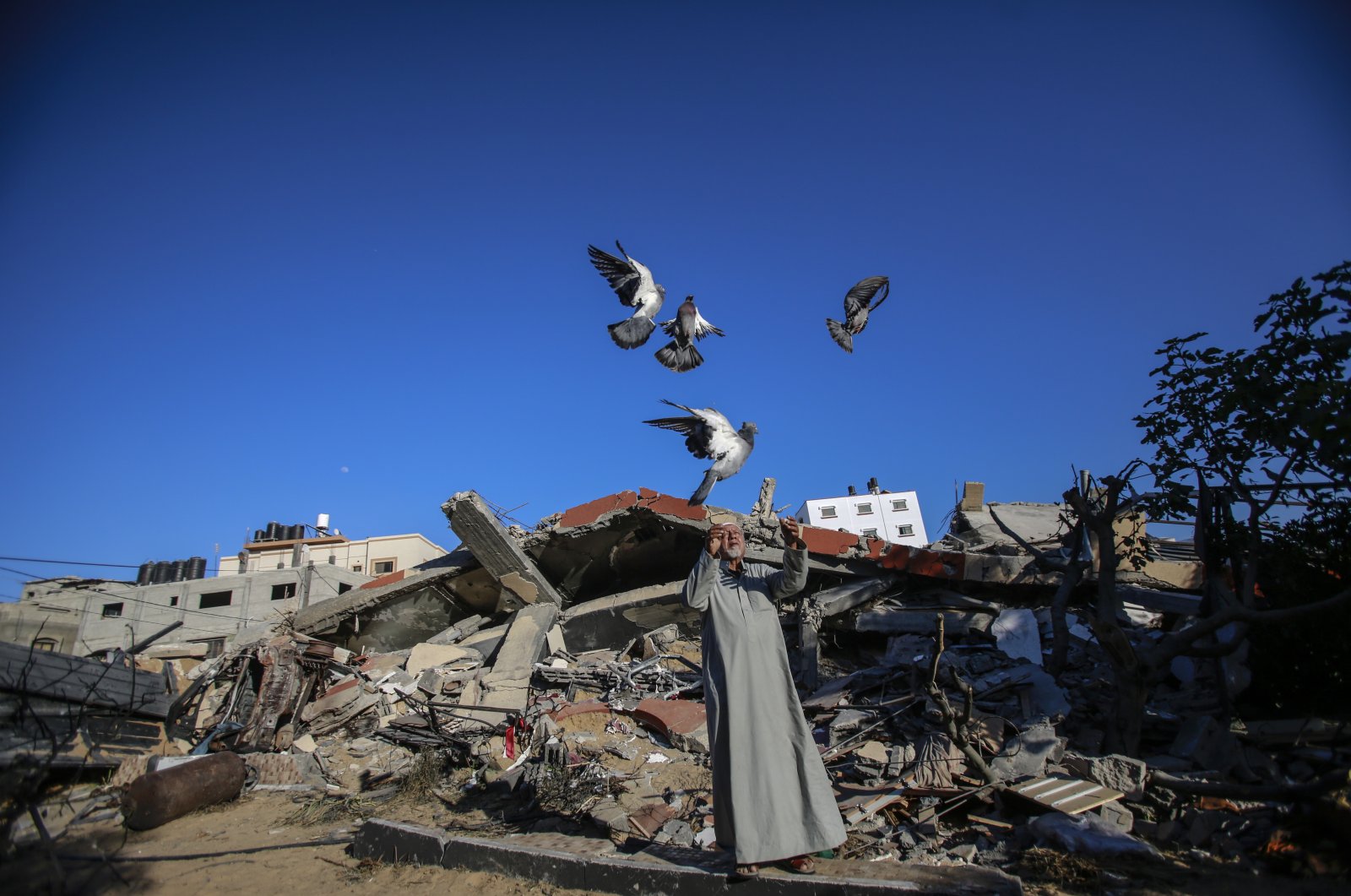 A Palestinian man plays with his birds above the ruins of his home, destroyed in recent Israeli airstrikes in Gaza city, Palestine, May 23, 2021. (Photo by Getty Images)
by Nagehan Alçı May 28, 2021 12:15 am
RECOMMENDED

After at least 230 deaths, a fragile cease-fire has finally started in Gaza. There has been fierce fighting that lasted 11 days and ended on May 21. During that time, Israel used heavy weapons and bombarded civilians.

For the first time, a strong opposing voice against Israel started to be heard even in the U.S. among mediatic circles. Turkey was the only big country in the global system that stubbornly raised its voice against Israeli violence, with President Recep Tayyip Erdoğan extending extensive diplomatic efforts to end the conflict.

The fire is over for now but is the problem solved? The answer is a sad and definite no.

Israel continues to violate the rights of Palestinians, claim the right over their territories and attacks their rights of worship. Unless this attitude does not change nothing can change. However, Israeli Prime Minister Benjamin Netanyahu's government has started to be questioned and criticized.

US approach in the region

U.S. Secretary of State Antony Blinken’s visit to Palestine this week is very important. He traveled to Ramallah in the occupied West Bank to hold talks with Palestinian President Mahmoud Abbas.

He also announced that they will reopen the consulate in Jerusalem and provide support to the Palestinians.

That means that the Biden administration is willing to move back from former U.S. President Donald Trump’s provocative policies. Because when Trump opened the U.S. Embassy in Jerusalem in 2019, it meant a downgrade of the U.S. diplomatic mission to the Palestinians.

Besides, it has been said that there are discussions over reopening the Palestine Liberation Organization (PLO) office in Washington, D.C., which was closed by the Trump administration.

A more concrete step announced by Blinken during his visit was that the Biden administration would provide $5.5 million for Gaza and $32 million for Palestinian refugees. Besides the U.S. Congress intends to provide $75 million for development in 2021.

I believe that Erdoğan’s continuous efforts helped a lot to raise consciousness about the violence targeting Palestinians. With his efforts, the U.N. General Assembly’s (UNGA) session on May 20 gave a clear picture.

The session was held under the presidency of Volkan Bozkır, a Turkish diplomat, and Foreign Minister Mevlüt Çavuşoğlu attended among others. In the session, it was strongly underlined that Palestine was occupied by Israel and that Palestinians are oppressed.

It helped a lot to bring about the cease-fire. Now the bombs have stopped at least for a while. I hope the peace will be forever and the rights of Palestinians can be achieved.

I believe that in the following days we will achieve a more positive atmosphere. U.S. administrations' moves are signaling a better point. On the other hand, Turkey-U.S. relations could also be more constructive.

Erdoğan asked several U.S. corporate executives for better ties in a call. He said that the bilateral relations will enter a new era after his face-to-face meeting with Biden set for June 14.

So I think that cooperation between the U.S. and Turkey concerning the Palestinian issue and better dialogue will contribute to finding solutions to long-lasting problems in our area.