Blinken announces US plans to reopen consulate in Jerusalem 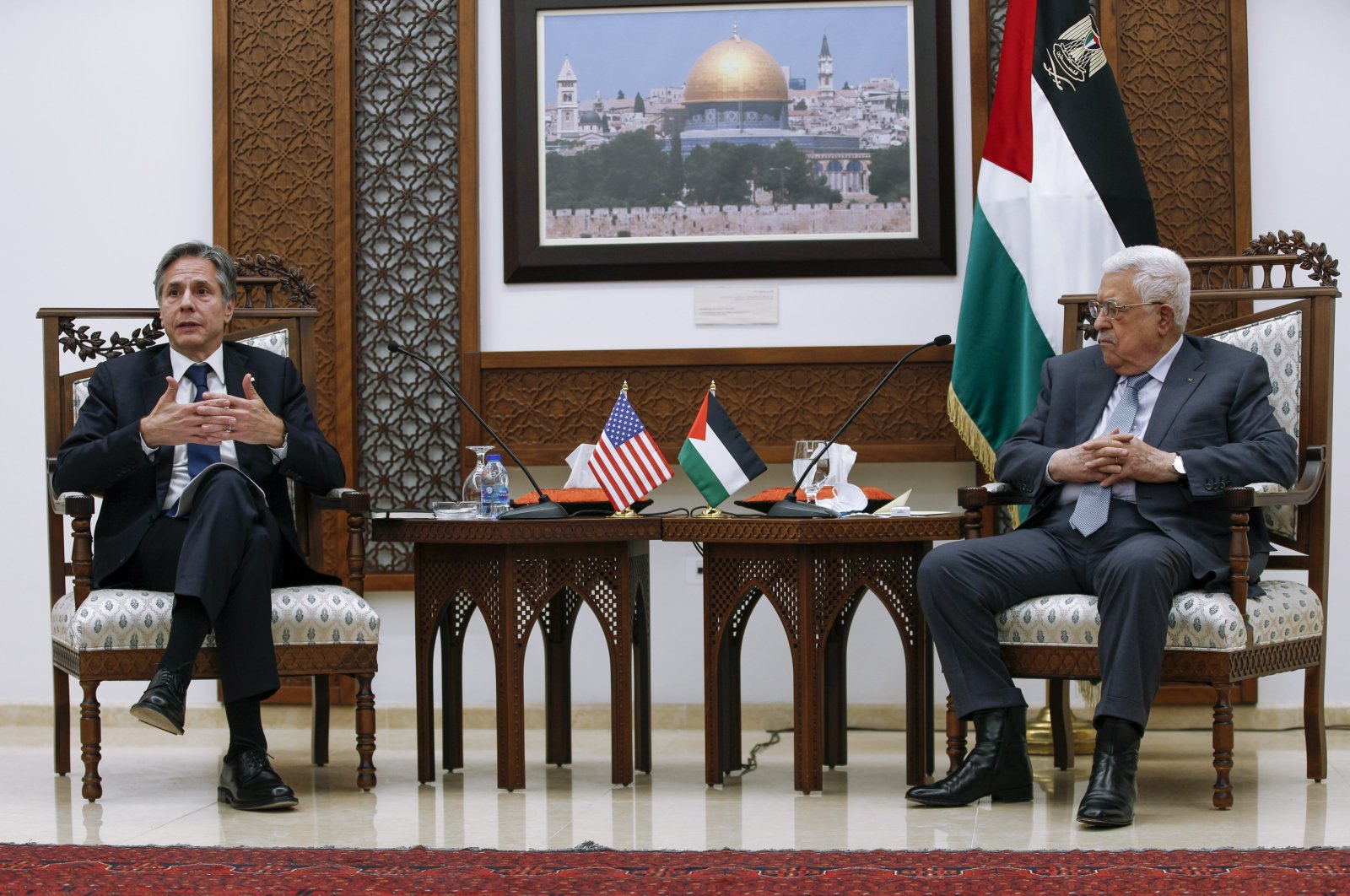 Palestinian President Mahmoud Abbas (R) and U.S. Secretary of State Antony Blinken hold a joint press conference in the West Bank city of Ramallah, Tuesday, May 25, 2021. (AP Photo)
by Agencies May 26, 2021 11:10 am
RECOMMENDED

After meeting Israeli Prime Minister Benjamin Netanyahu in Jerusalem U.S. Secretary of State Antony Blinken headed to occupied West Bank Tuesday where he pledged to reopen his country's consulate in Jerusalem, which had historically served as an office in charge of diplomatic relations with Palestine.

His comments came during a press conference following a meeting with Palestinian President Mahmoud Abbas in Ramallah as part of an official visit to occupied Palestine. During the meeting, the two sides discussed the recent efforts to consolidate the cease-fire across the entire occupied Palestinian territories, including Jerusalem and Gaza, reconstruction of the devastated Gaza Strip after 11 days of Israeli airstrikes, and ways to achieve a political solution and to develop the U.S.-Palestinian partnership, Palestine's official news agency WAFA reported.

In the news conference, Blinken said the U.S. will provide $5.5 million in emergency financial assistance to the Gaza Strip and $32 million in support to international aid organizations.

"We will continue to oppose +any unilateral practice that leads to further violence between Israel and Palestinians,” he said.

The announcements signaled a break with U.S. policy under former President Donald Trump, who had shuttered the diplomatic mission for Palestinians in 2019 and slashed aid to the Palestinian Authority (PA). In the long term, Blinken evoked the "possibility of resuming the effort to achieve a two-state solution, which we continue to believe is the only way to truly assure Israel's future as a Jewish and democratic state, and of course to give the Palestinians the state they're entitled to."

Abbas, for his part, extended thanks to the U.S. administration under President Joe Biden for the efforts to reach a cease-fire in Gaza, WAFA said. Abbas underlined the importance of U.S. intervention to pressure Israel to halt its ongoing attacks in occupied Jerusalem, the West Bank and Gaza, which he said "undermine US efforts to solidify the cease-fire and de-escalate the situation,” according to remarks carried by Anadolu Agency (AA).

Regarding his decision to cancel the May 22 parliamentary elections in Palestine, Abbas said once Israel approves holding elections in Jerusalem, his government will immediately hold them without delay. In late April this year, he unilaterally postponed the first Palestinian national elections in 15 years over Israel's blocking of elections in East Jerusalem.

The parliamentary polls were expected to be held on May 22 and presidential polls on July 31, while the Palestinian National Council elections would have taken place on Aug. 31.

Blinken arrived in Israel early Tuesday on the first stop of his first Middle East tour since taking office. Netanyahu held talks with Blinken on a host of regional issues, including the recent cease-fire deal in the Gaza Strip and Iran.

Following his meeting with Netanyahu, Blinken met with senior Israeli officials including President Reuven Rivlin and Foreign Minister Gabi Ashkenazi, according to U.S. State Department spokesperson Ned Price. Blinken will visit Cairo Wednesday, where he is to meet with Egyptian President Abdel-Fattah el-Sissi before flying on to Jordan for talks with King Abdullah II.

Egypt was the first Arab country to sign a peace treaty with Israel in 1979. It has sent delegations to both Tel Aviv and Gaza to watch over the implementation of the cease-fire and has also been coordinating international relief and reconstruction aid for the Palestinian territory, which has been under an Israeli blockade for nearly 15 years.

Biden held a call with his Egyptian counterpart on Monday for the second time in less than a week to discuss the relief effort. Blinken said Wednesday the U.S. was in the process of providing more than $360 million in assistance to the Palestinian people. This included $250 million in economic, development, security and humanitarian assistance for the Palestinian people announced in March and April.

"All of these funds will be administered in a way that benefits the Palestinian people – not Hamas, which has only brought misery and despair to Gaza," Blinken said.

Israel on Wednesday rejected a decision by the U.S. administration to reopen its consulate general in occupied East Jerusalem. Israeli Ambassador in Washington, Gilad Erdan, told the Israeli Public Broadcasting Corporation that Tel Aviv firmly opposes the U.S. move to reopen its consulate to the Palestinians within what he described as Israel's sovereign territory.

He, however, ruled out that the Israeli opposition will cause any crisis with Washington. According to The Jerusalem Post newspaper, the issue was raised during Netanyahu's meeting with Blinken.

British Foreign Secretary Dominic Raab meanwhile traveled to Jerusalem Wednesday, also to back international efforts to shore up the cease-fire.

Speaking ahead of planned talks with Israeli and Palestinian leaders, Raab urged an end to the "cycle of violence" through a two-state solution to the Israeli-Palestinian conflict.

"The events of the last month demonstrate the urgent need to make genuine progress towards a more positive future for both Israelis and Palestinians, and break (the) cycle of violence that has claimed so many lives," he said, as Agence France-Presse (AFP) reported.

The latest military escalation started after clashes in East Jerusalem's Al-Aqsa Mosque compound, Islam's third holiest site. Israeli security forces had moved in on Palestinian worshippers there toward the end of the Muslim holy month of Ramadan.

They had also sought to quell protests against the threatened eviction of Palestinian families from homes in the East Jerusalem neighborhood of Sheikh Jarrah to make way for Israeli settlers.

Israeli airstrikes and artillery fire on Gaza killed more than 250 Palestinians and wounded over 1,900 people in 11 days of conflict from May 10, the health ministry in Gaza says. The United Nations estimates that about 1,000 homes were destroyed.