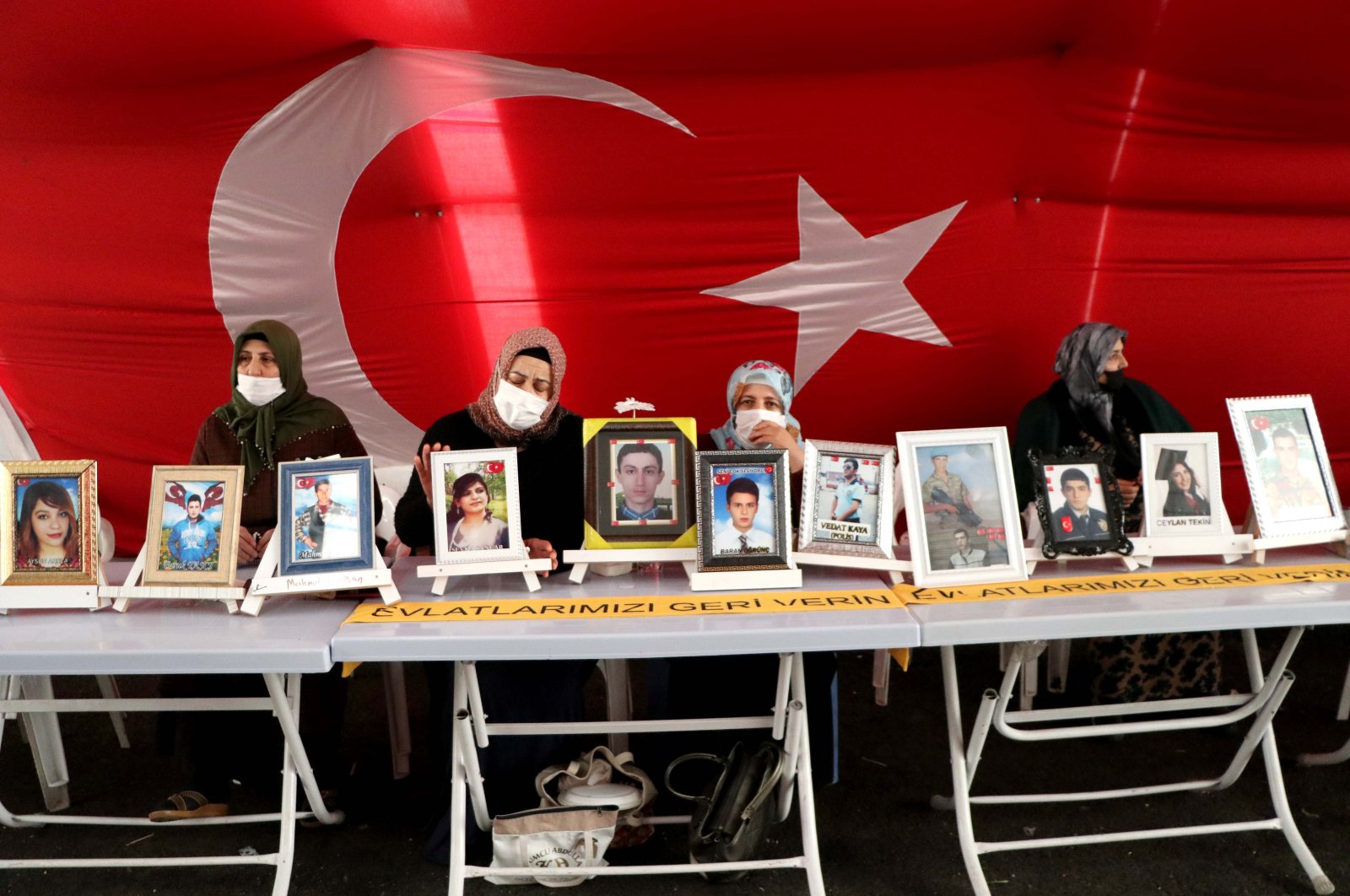 Mothers continue their sit-in protest in a tent displaying photos of their children abducted by the PKK terrorist group, set up outside the pro-PKK Peoples' Democratic Party (HDP) headquarters in Diyarbakır province, southeastern Turkey, Feb. 2, 2021. (AA Photo)
by Hilal Kaplan Feb 19, 2021 12:05 am
RECOMMENDED

The ETA, an acronym for Euskadi ta Askatasuna (“Basque Homeland and Freedom”), was a separatist, terrorist organization in the Basque Country of Spain. The Batasuna party was the political wing of the ETA, which killed nearly 900 people in terrorist attacks before it was officially disbanded in 2018.

Batasuna had received 224,000 votes out of a total of 1.25 million in the 1998 elections and denied allegations of any links to the ETA. However, it was banned and then closed in 2008 on the basis of 23 articles including its refusal to condemn the ETA for terrorist attacks or call the group a terrorist organization, and for justifying violent means to achieve political goals in their slogans, brochures and other publications.

The Peoples' Democratic Party (HDP) is the political wing of the PKK, which is a U.S. designated terrorist organization, in Turkey. HDP members, however, vehemently deny any links to the PKK.

Even so, their jailed ex-leader Selahattin Demirtaş defined PKK ringleader Abdullah Öcalan as his leader and even promised to erect his statue in southeastern Diyarbakır. Moreover, in his press statements, he vows that an investigation would be launched against HDP members if they do not attend the funerals of PKK members.

As a matter of fact, HDP deputies do not see any harm in attending the funerals of PKK suicide bombers such as Abdulbaki Sömer and carrying their coffins wrapped in the PKK flag. Moreover, the HDP called on people to take to the streets against the state on Oct. 6-8, 2014, killing 51 people.

Recently, when the PKK killed 13 Turkish citizens whom it had taken captive, the HDP voluntarily took on the PKK’s propaganda and bandied about the lie that it was the Turkish state that had killed the hostages. But forensic reports proved that the hostages were not killed during Turkish bombing, but by bullets in their heads before the bombing began.

In addition, the PKK's attacks on the army by digging trenches and placing explosives in southeastern cities were praised by HDP executives, including Demirtaş. The HDP assists the PKK not only in discursive terms but also materially.

For instance, in one PKK attack that took place in the southeastern province of Şırnak in 2016, 11 police officers were killed. Who do you think the bomb-laden truck belonged to? The answer is simple: to the Cizre Municipality in Diyarbakır administrated by the HDP.

Last year, a PKK member who fled the state was found in the car of HDP Deputy Murat Sarısaç. Also, HDP Deputy Nuran Imir was caught on camera trying to hide the mobile phone of a detained PKK member from the police. Unfortunately, these are just a few examples among many.

Given all this, treating the HDP as a persecuted political entity is not consistent with democracy if the European Convention on Human Rights (ECtHR) law approving the closure of Batasuna is to be applied.

The HDP’s sins have proven to be even more deadly than those of Batasuna. Spain would not allow a party like the HDP to operate as a legitimate political party. I can only hope we act as democratically as Spain.