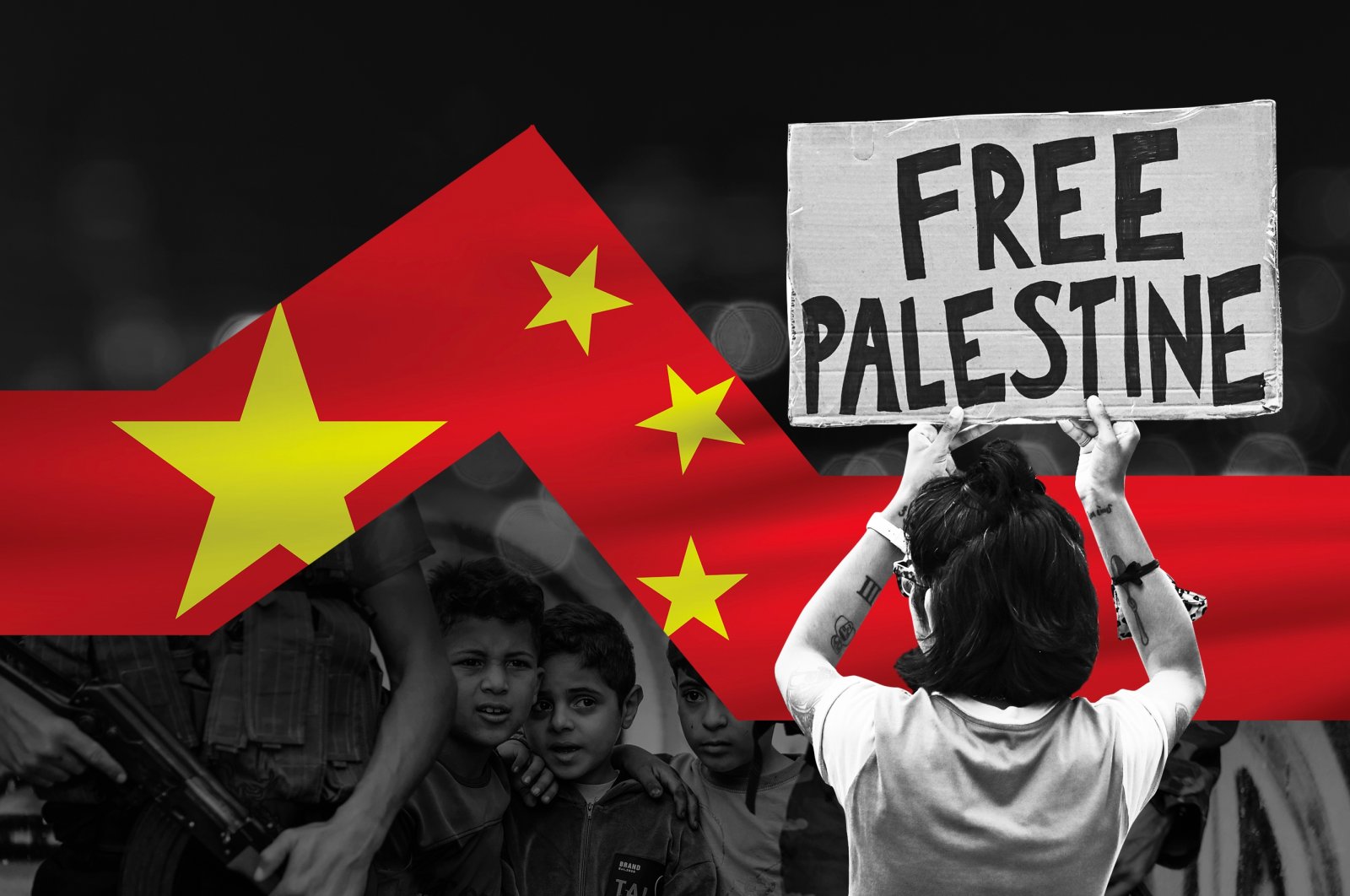 A photo illustration by Daily Sabah's Büşra Öztürk shows a protester holding a banner with "Free Palestine" as the Chinese flag is seen in the background.
by Ali Abo Rezeg Nov 18, 2021 12:05 am

Beijing's diplomacy for the Palestinian cause has five challenges to overcome. But, no matter what the result will be, the country will likely strengthen its hand in the region

I recently attended a conference tackling Chinese-Palestinian relations and discussing a probable Chinese role in the Middle East in general and the Palestinian cause in particular. The conference was staged over the fact that Beijing is trying to actively partake in the region after estimations that the U.S.’ withdrawal from Afghanistan and Iraq will leave a huge power vacuum there.

Wang also mentioned that his country was preparing to host peace talks with a view to bringing the Palestinians and Israelis together after a stalled peace process since 2014 following Israeli refusal to halt the expansionist policy of settlement in the occupied West Bank and East Jerusalem.

'Opportunity' in the region

Palestinians eyed the Chinese call eagerly with five Palestinian officials – mainly the Palestinian president – hailing the initiative and terming it an “opportunity” to bring peace to the war-torn region. Israel, however, turned a deaf ear to the Chinese offer; thus, no Israeli official commented on the initiative, apart from the comments from a former Israeli official claiming that China was nothing but a “show-off” for this offer. Hence, the Israeli rejection of any peace process not including the U.S. as the chief mediator constitutes the first and main challenge for China to face in playing a mediating role in the Israeli-Palestinian conflict. The U.S. will remain Israel's preferred broker, given the fact that, for the latest 30 years on the peace path, it has exerted no pressure on Israel to commit to the peace obligations nor to respect the signed agreements with the Palestinian side.

The death of the two-state solution comes as the second challenge facing China. Beijing believes that this approach might still bring peace to the region despite the fact that it is highly opposed by Israel. For decades, Israel has been creating new realities in the ground to make this solution elusive. Using the settlement issue in the West Bank as an example, we’ve seen the number of Israeli settlers triple since the Oslo Accords of 1994, not least the daily incursion to Al-Aqsa Mosque and the policy evicting Jerusalemites from the Sheikh Jarrah and Silwan neighborhoods.

Thirdly, China is not engaging with the weighty actors on the Palestinian side, most specifically the resistance movements of Hamas and Islamic Jihad. The latest Israeli onslaught on Gaza proved that Hamas is the main influential political player in the Palestinian scene, with the group making the decision of war (military escalation) and peace (cease-fire). The group’s popularity is also rising on Palestinian streets, with an opinion poll held in Ramallah in October giving Hamas’ performance during the latest tension with Israel an endorsement of over 71%. These realities cannot be ignored, as any country seeking to have a role in any cause should include the effective actors, both the state and nonstate ones.

The fourth challenge comes as China has no will nor power to force Israel to sit at the negotiation table. The same goes with Israel, which has no wish or aspiration to do so, as it is self-sufficient in terms of military equipment, technology and U.S. cash flow. In fact, China needs Israel more than Israel needs it, thanks to the sophisticated agricultural technology and advanced software companies it has.

The lack of Chinese experience in peacemaking or mediation is the fifth challenge. Only two years before, China hosted talks between the Afghan rivals that brought about no breakthrough in the country’s peace and stability. Beijing’s lack of experience was actually seen in the low-profile Palestinian and Israeli figures China invited for talks this July in Beijing under the banner of “Friends of Peace.”