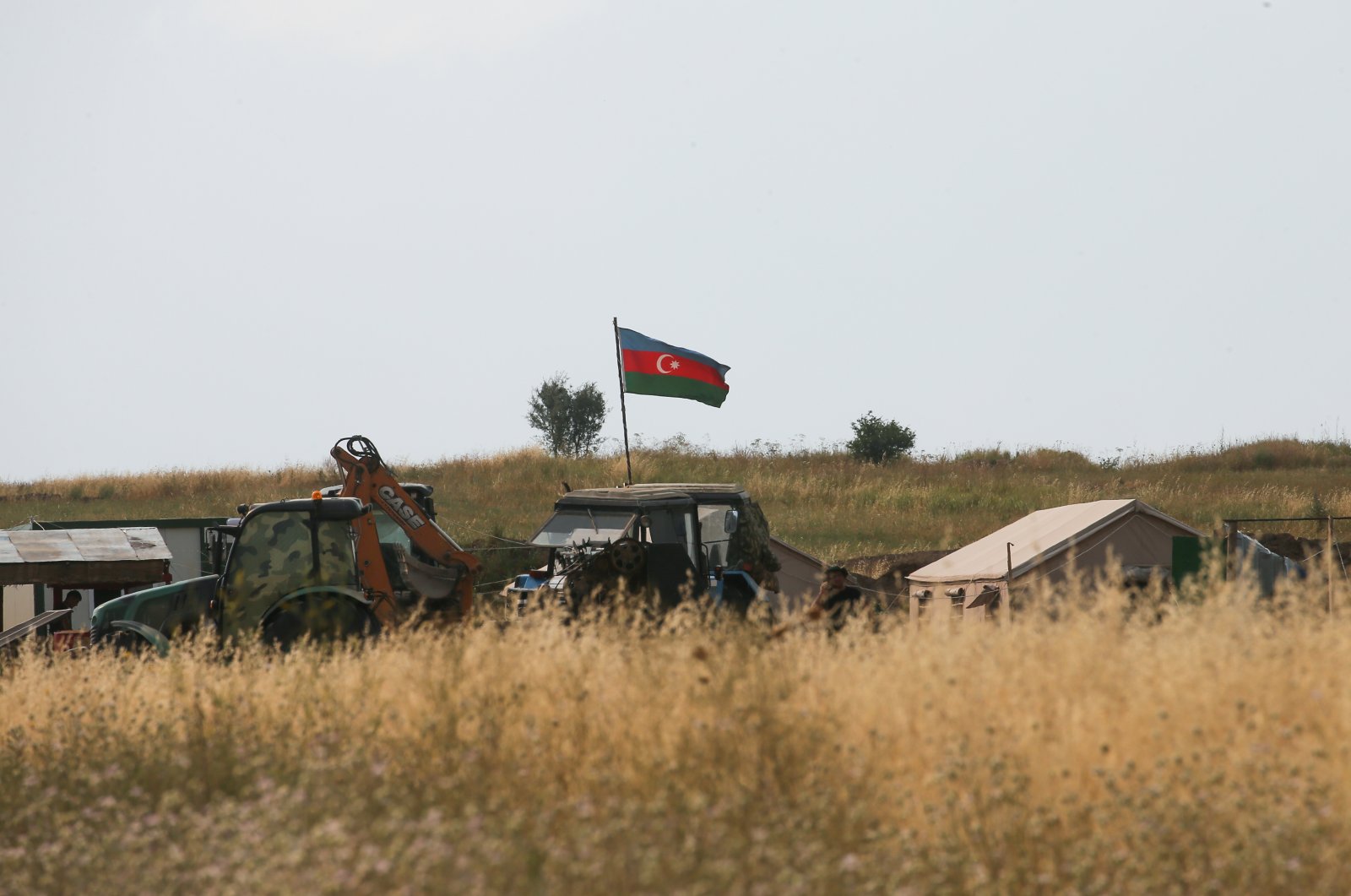 An Azerbaijani military checkpoint at the line of contact on the Azerbaijani-Armenian border, Qudabli, Azerbaijan, July 3, 2021. (Photo by Getty Images)
by Bayram Aliyev Aug 28, 2021 12:05 am
RECOMMENDED

The 44-day war between Armenian forces and Azerbaijan brings about new debates. Azerbaijan liberated its lands that had been under Armenian occupation for about 30 years. Azerbaijan, Armenia and Russia signed a cease-fire agreement on Nov. 9, 2020, that has shaped the region in light of new realities and stronger Turkish involvement in the region as an important ally of Azerbaijan. Signing this document, Yerevan accepted Azerbaijan's terms, but as time progresses, the implementation of the document has become difficult for several reasons.

First and foremost, it seems that the cease-fire signed on Nov. 9, 2020, will continue to be one of the most effective documents in the future, as the final peace document is far from being signed between the sides. The document is also important in terms of guaranteeing Russian effectiveness in the region. Thus, a permanent peace agreement would be against Russian interests, as the Kremlin wants to maintain its long-term presence and dominance in the region through conflicts. Neither permanent peace nor total war serves Russian foreign policy goals in the region.

Turkey has clearly shown an interest in being an effective player in the postwar South Caucasus. Ankara supported Azerbaijan in the war and it is no secret that Turkish-made drones played an important role in Azerbaijan's victory. Ankara wants to increase its influence in the region in the postwar period and to guarantee a safe route to Central Asia via Azerbaijan. This fact brings a new dimension to the Russian-Turkish rivalry that was previously witnessed in Syria and Libya. Furthermore, it is obvious that playing an influential role in the post-conflict region would help Ankara strengthen its economic ties with regional countries and increase Turkey's role in regional and global politics. Ankara actively seeks to expand its soft power tools through the South Caucasus to Central Asia and be an active player in the future of this wide region. Far from being a romantic initiative, seeking an economy-based rational unity of Turkic countries might transform these actors to be a global player.

During the war, the efforts from France, and later the U.S., have shown that global actors try to balance Russian hegemony in the region. U.S. President Joe Biden's administration especially tries to be more active in the region as a part of a new U.S. foreign policy strategy. In this environment, issues related with achieving permanent peace become more intricate.

A document for change

In fact, the November declaration has changed the geopolitical map of the region because, with this statement, Yerevan and Baku agreed to open transport links and regional economic integration. According to the document, Russia has become a key state guaranteeing peace and a cease-fire in the region, and Russian peacekeepers have been deployed along the line of contact in Nagorno-Karabakh, including the Lachin corridor. A Turkish-Russian joint monitoring center was also established in Aghdam. The center monitors the observance of the cease-fire between Armenia and Azerbaijan, but most importantly, it also provides the presence of Turkey in the region. Thus, two regional powers – Turkey and Russia – have strengthened their positions in the South Caucasus, ensuring their diplomatic and military presence.

It may seem that the conflict between Armenia and Azerbaijan has been resolved and the status quo has been changed, but still, as a new status quo has not emerged, the new political and security environment threatens peace, and a challenging stability and security environment remain in the post-conflict era. Namely, the cease-fire was broken several times both at state borders of Azerbaijan and Armenia, as well as some incidents that happened in the Azerbaijani regions that are under the control of Russian peacekeepers. Problems with the implementation of the above-mentioned document still exist, as the remnants of Armenian military units have not been withdrawn from the territories of Azerbaijan that are under the control of Russian peacekeepers.

What worsens the situation?

The confusing moves and statements coming from both conflict-involved countries and other regional actors worsen the situation. The activities of Iran create dissatisfaction in Azerbaijan, although both countries have expressed interest in having a friendly relationship.

As a result, the Iranian ambassador to Baku was invited to the Azerbaijani Foreign Ministry and a note verbale was submitted to the ambassador expressing discomfort over the recent arrival of Iranian vehicles to Azerbaijani territories being overseen by Russian peacekeepers.

Secondly, Russian Defense Minister Sergei Shoigu has stated recently that Russia will help Armenia modernize its army, making an emphasis that Armenia is a key partner and ally of the Kremlin in the South Caucasus region. The Azerbaijani side again expressed that the redeployment of the Armenian military would threaten the peace in the region. Another threat to peace is the harsh rhetoric of newly appointed Armenian Defense Minister Arshak Karapetyan that has shown the postwar period will not be smooth and peace will not be provided in the short term. In turn, Azerbaijan continues its cooperation with Israel in the military sphere, aims to have $2 billion worth of military deals with Israel and further strengthens its military ties with Turkey and Pakistan.

On the other hand, new opportunities for regional economic integration are emerging as mentioned above. Both Ankara and Moscow support regional economic integration by opening transport corridors in the region. In this sense, the Zangezur corridor is a very important transport route. All parties involved in this project will benefit from it. With the opening of the Zangezur corridor, the Nakhchivan Autonomous Republic will be directly connected with Azerbaijan, and Turkey also will have an opportunity for direct connection with other Turkic-speaking countries in Central Asia. Armenia will have access to transport connections with Iran via Nakhchivan and with Russia through northwest Azerbaijan. Furthermore, a new platform proposed by Azerbaijan and Turkey that would involve Russia, Iran, Georgia and Armenia, could propel peace and development in the region.

Taking into consideration the issues mentioned above, the region's problems are not expected to be solved in a short time. However, it is essential that both governments and nations understand that a rationalist and constructivist approach is the main element needed to bring peace and development to the region.