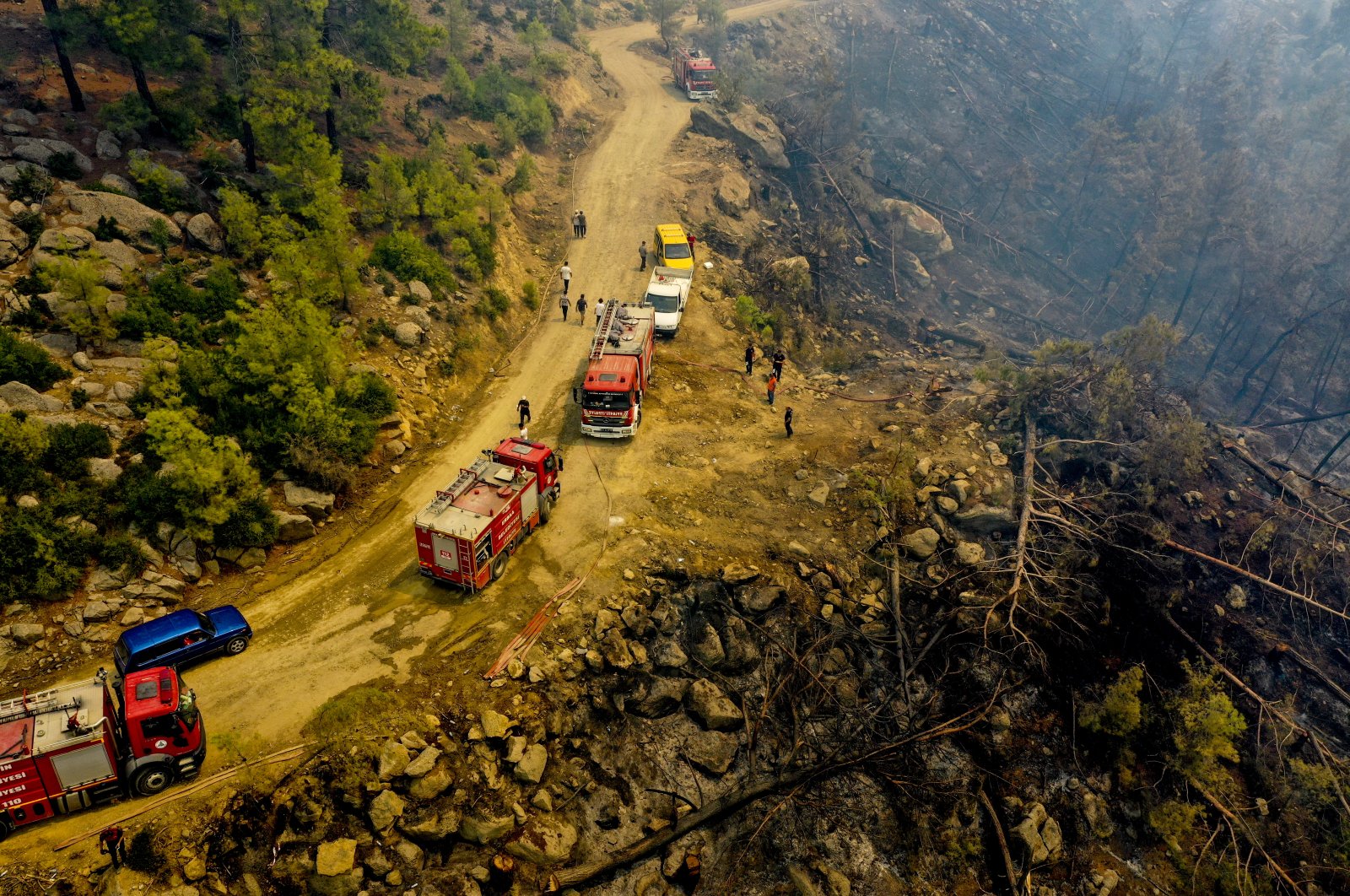 Without a doubt, climate change is a common issue for the whole world to focus on. It is always right beside us and appears in different forms. For example, the rise in global temperatures, which are now 1.2 degrees Celcius (2 degrees Fahrenheit) above pre-industrial times, is both heating up the Earth and destabilizing it. The number and effects of climate change related events are increasing day by day.

For sure, one of the main effects is the constantly increasing temperatures. In many parts of the world, this summer's heat is breaking records. Another problem caused by dry and hot air combined with low humidity is forest fires. The fires in Australia, California and Siberia that lasted for months are an indication of this. The Mediterranean Basin countries, which are expected to be the most impacted by the acute effects of climate change, are currently suffering from such forest fires. Italy, Greece, Spain, Algeria and Turkey have been dealing with a great disaster for days. The slightest spark opens the door to a catastrophe these days, where temperatures occasionally reach 45-50 degrees Celcius (113-122 degrees Fahrenheit) and humidity levels are below 10%.

Lives are burning, black smoke clouds the air, rising over our forests, endangering trees and plant life. However, an ecosystem without plants cannot survive for long.

Trees make up the majority of plants. Even a single tree has dozens of benefits, so much so that a single adult tree with leaves can meet the daily oxygen needs of 2 to 10 people. They absorb carbon dioxide, an important greenhouse gas, and keep our world cool. According to World Resources Institute (WRI) assessments, forests absorb 7.6 billion metric tons of carbon dioxide globally. This value is equivalent to 1.5 times the annual carbon emissions of the United States. Trees also play an active role in the water cycle through sweating and contribute to the cooling of the environment by absorbing thermal energy present in the environment.

Unfortunately, we are destroying these unique treasures with our own hands, sometimes to create settlements and sometimes to open lands up for agriculture. Sometimes we sacrifice these natural miracles for a comfortable life. We use trees with impunity for new furniture, for wooden dwellings, for wood-based structures.

According to the data of the United Nations Environment Program (UNEP), 15 billion trees are cut down worldwide annually for the production of paper and timber. Only 5 billion new ones are planted to replace the lost ones. Therefore, we wipe out 10 billion trees from the Earth's surface every year.

According to the World Forest Outlook 2020 (SOFO2020) Report published by the Food and Agriculture Organization of the United Nations (FAO), 420 million hectares (1.04 billion acres) of forested area has been lost in the last 30 years due to different uses. Forests are known as the most effective and low-cost method in combating today's global climate crisis.

Another problem that destroys our precious forests is fire. Again, according to the SOFO 2020 report, approximately 100 million hectares of land have been damaged by fires in the last 30 years. There are certain causes and triggering elements that lead to a fire. These can be natural causes such as lightning, or human-led causes such as cigarette butts or barbecues. Sometimes there are sabotages that aim to shake the integrity of a country.

There has been another factor that we cannot ignore: global climate change. Fire is difficult to control under favorable conditions. The conditions that lead to an uncontrollable situation are extreme heat, droughts due to heat, low humidity and a decrease in precipitation. The prominent factor among these is the extreme heat or heat waves that we encounter more frequently because of climate change.

In the fires that took place in California this year, which have continued for weeks, 1 million hectares of land have turned to ash so far. The Siberian fires in Russia have become unstoppable. Forested land was damaged in fires in Australia that started in July 2019 and lasted for about eight months. The main reason for the fire's growth was shown to be long-lasting high temperatures and droughts.

The amount of greenhouse gas released into the atmosphere from the fires over a period of approximately nine months was calculated as 434 million tons. This value is equivalent to Turkey's greenhouse gas emissions in the same period. It was determined that around 1 billion animals were killed or injured by the fires. According to the Intergovernmental Panel on Climate Change (IPCC) reports, the Mediterranean Basin, which includes our country, is among the areas that will be most affected by the negative effects of climate change. Droughts, heatwaves, fires, floods and tornadoes are among the events that have begun to occur more frequently in Turkey recently.

The event with the biggest impact among these was undoubtedly the fires the country recently experienced. According to data from the General Directorate of Forestry (OGM), while there has been an increase in the number of fires in Turkey over the years, there has been a decrease in the total area damaged by these fires. While the number of forest fires that occurred in the 1940s was around 1,000, this number has reached 3,500 today.

Turkey is going through difficult times due to;

Nevertheless, in terms of crisis management, Turkey is doing a good job. For example, the fires in the country's south were fought in a short time and are now under control.

First of all, the OGM, which is known to have a successful history, mobilized its resources. Relevant ministers were transferred to the region at jet speed. Crisis centers were established. Disaster and Emergency Management Authority (AFAD) and National Medical Rescue Team (UMKE) teams were on the field as usual. The Turkish Red Crescent was in the region with an army of volunteers as well. Security forces mobilized all their means. In addition to land-based water cannon vehicles (TOMAs), military and gendarmerie helicopters, coastal safety and coast guard teams from the sea responded to the fire within their means.

The amenities of technology were also used. With the domestic satellite Göktürk and domestic unmanned aerial vehicles (UAVs), fire zones were detected, intervention points were determined and successful interventions were ensured by directing aerial extinguishing vehicles in this way.

Local governments from many parts of Turkey also sent reinforcements to the fire team. With the support of brother countries such as Azerbaijan and Ukraine, as well as the European Union, the fires that affected a large area were brought under control. From the first day, the ministers of Environment and Urbanization, Agriculture and Forestry, and Transport and Infrastructure were transferred to locales. Damage assessments were made. Messages of unity and integrity were given.

Doomsayers on the scene

As in every event, there were also those who wanted to take advantage of such disasters. The first one was seen in the case of the Turkish Aeronautical Association (THK) planes. Then it followed with claims that those fires were started so that hotels, mines and settlements could be constructed on the cleared land. I return these entirely baseless claims to their owners, as they are obnoxious and overlook the effort given in the struggle in which Turkey sacrificed nine lives.

Article 169 of the Turkish Constitution makes it necessary to reforest the burned areas. There is no need for forest fires to happen in order to open a tourism facility or grant a mining license anyway. It is already possible to allocate certain areas for these projects because of related laws such as the Tourism Promotion Law and the Forest Law. Therefore, it is pointless to start fires that are difficult to control. In these fires, two thermal power plants were lost, both of which are billion-dollar investments. Who would allow such huge investments to be wasted for a few buildings to be built in these areas? I would like to reiterate once again that these are extremely inconsistent claims.

Some 29% of Turkey's land is covered with forests. The country is one of the rare countries that has increased the amount of land dedicated to forests. In the last 20 years, 5.4 billion new saplings have been planted. According to OGM assessments, Turkey's forest assets increased by 2.1 million hectares.

This great achievement was also included in the Global Forest Resources Assessment Report of the FAO covering the years 2015-2020. According to the report, Turkey ranked first in Europe and sixth in the world in afforestation between 2015 and 2020.

Forests are momentous ecosystems that do not grow easily. That is why it hurts us so much to see the destruction from these fires. That is why we want to restore the burned areas as soon as possible. However, nature has the ability to repair and renew itself. When a burned area is left to itself, we will witness a new greening, resprouting and resurrection there in a few years. This is the policy applied and the path followed in almost every part of the world.

The vast majority of Turkey's burned areas consist of red pines. The seeds of red pines are quite thick. They can remain under the ground for a long time without germination. During fires, these shells can become thin and sprout after the fire. Therefore, red pine forests can almost repair themselves.

However, there is such public pressure in Turkey for the burned areas to be greened by human hands. Some malicious circles use this as leverage and organize campaigns. It can abuse the value Turkish people give to green spaces. It is better to leave the job to the professionals. There is a well-established institution in this country with a 200-year history: the OGM. Let's entrust the job to this competent agency and witness the renewal of nature together.

From crisis to risk

Turkey should carry out studies to prevent possible disasters by identifying the regions or structures that may be affected, possible damage, and how to minimize the negative effects in cases where disasters cannot be prevented. There is a danger staring the country in the face: Climate change.

Turkey is experiencing its devastating effects more and more severely with each passing day. Temperatures will continue to rise and droughts will increase, which will trigger more fires. Therefore, it is inevitable for Turkey to improve itself within the scope of combating and adapting to climate change. Forests are now strategic resources. The country must take all the necessary steps to protect them.