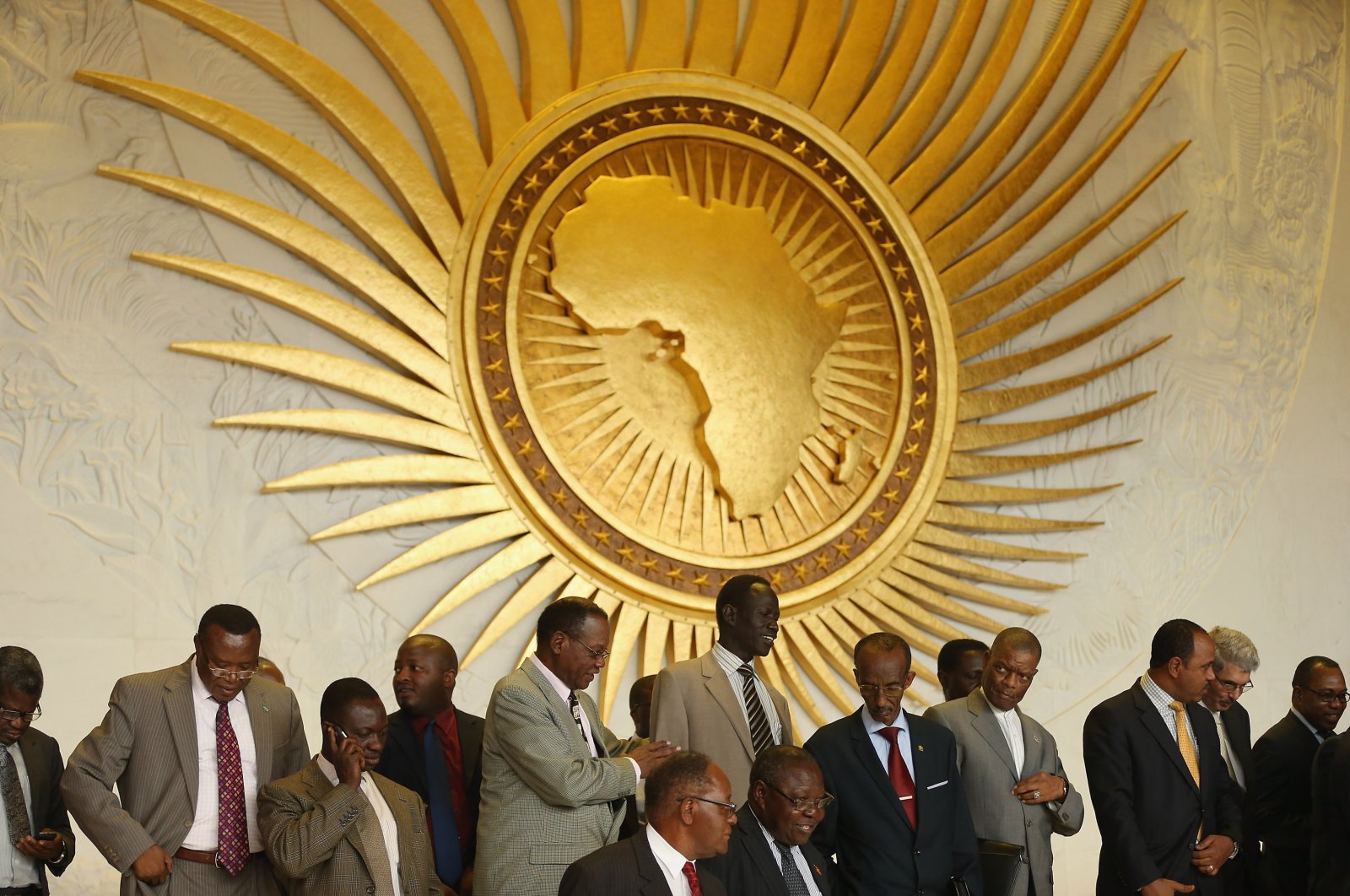 Delegates arrange themselves for a group picture during a visit by the German president to the headquarters of the African Union (AU) in Addis Ababa, Ethiopia on March 18, 2013. (Getty Images)
by Najla M. Shahwan
Sep 02, 2021 12:05 am

Today, as Israel rejoins the AU, the continental body must be willing to step up its efforts to stand up for Palestine and must declare its stance publicly

Israel announced last month it would receive observer status in the 55-member African Union (AU), 19 years after it was ousted from the group. Israeli Foreign Minister Yair Lapid said at the time “This is a day of celebration for Israel-Africa relations."

“This diplomatic achievement is the result of efforts by the Foreign Ministry, the African Division, and Israeli embassies on the continent."

“This corrects the anomaly that existed for almost two decades,” Lapid continued, “and is an important part of strengthening of fabric of Israel’s foreign relations. This will help us strengthen our activities in the continent and in the organization’s member states.”

Israel is rejoining the AU as an observer member, 19 years after it was ousted from the predecessor Organization of African Unity in 2002 when the organization dissolved itself and became the AU.

Israel’s ambassador to Addis Ababa, Aleleign Admasu, officially submitted Israel’s charter as an observer member to the 55-member continental organization. Israel had twice attempted to return to the organization in recent years but failed.

This time around, Israel's Foreign Ministry announced a “diplomatic operation” that involved a visit by the ministry’s director-general of African affairs, Aliza Bin-Noun, to the Ethiopian capital, Addis Ababa, where she met with 30 ambassadors from member countries, Israeli Newspaper Haaretz reported.

The acceptance of Israel’s membership as an observer state in the AU has created a great deal of controversy inside and outside the organization, with the objection of many member states to the measure taken unilaterally by the AU Commission's Chairperson Moussa Faki.

Almost two weeks after Israel was accepted, seven Arab countries – Algeria, Comoros, Djibouti, Egypt, Libya, Mauritania, and Tunisia – submitted an objection to the decision made by Faki. They argued that the move “is unacceptable ... because it is a procedural and political violation” of the criteria for granting observer status to the AU.

The rest of the Arab League member states of the African Union, Morocco, Sudan and Somalia, remained silent.

The letter was also signed by Jordan, Kuwait, Qatar, Palestine, and Yemen, in addition to the delegation of the Arab League, who expressed its rejection of the July 22, 2021 step by the chairperson “on a political and sensitive issue on which the African Union, at its highest decision-making levels, issued long-standing and clear decisions that express its firm position in support of the Palestinian cause and opposition to all of Israel’s practices against the brotherly Palestinian people that contradict the supreme interest of the Union, its values, ideals and decisions.”

The seven signatories demanded the reintroduction at the next Executive Council session of the debate over Israel’s application to join the AU as an observer, and that as part of an Arab effort led by Algeria and supported by South Africa, Nigeria, and other African countries to rescinding the said decision.

Botswana and Namibia have expressed opposition to Israel’s observer status, but have not officially joined the bloc.

Algeria is also pushing for an amendment to the AU charter that would prevent any country outside Africa itself from being granted special status.

Since its foundation in 1948, Israel has invested greatly in establishing ties with Africa and in the late 1950s, its then-Foreign Minister Golda Meir, who later became Israel's prime minister, set about promoting a diplomatic initiative with newly established African states.

In 1957, Israel recognized Ghana's independence and in 1958, Israel's Agency for International Development Cooperation (MASHAV) was established to support the emerging independent African states. In 1963, it established its first embassy in Nairobi, Kenya.

From then on, Israel worked within the framework of military, security and economic arrangements, including arms sales, military training and technology but this honeymoon period between Israel and African countries only lasted until the late 60s.

In 1967, Israel's military occupation of the West Bank, the Gaza Strip and the Golan Heights after the Six-Day War reset its relations with Africa, as Israel began to be perceived as a colonizing state. After the Israeli-Arab war in 1973, many sub-Saharan countries broke off diplomatic ties and shifted to a more pro-Arab alliance.

But during the 1970s, when most African nations renounced their diplomatic ties with Israel, some development programs continued secretly – albeit on a smaller scale – and military and intelligence cooperation continued with some of Africa's autocratic regimes.

African-Israeli relations witnessed ups and downs, as well as periods of diplomatic disinterest but in recent years, Israel has renewed its interest in the continent. In 2009 then-Foreign Minister Avigdor Lieberman visited Ethiopia, Ghana, Kenya, Nigeria and Uganda and Israel's foreign minister at that time, Benjamin Netanyahu, visited several African countries, mainly in East Africa and later on, when he became Israel’s prime minister he made relations with Africa a priority especially during the latter half of his 12 years in office.

In 2016, he became the first Israeli premier in decades to travel to the continent when he visited four East African nations – Uganda, Kenya, Rwanda and Ethiopia, according to the Times of Israel. "Israel is coming back to Africa, and Africa is returning to Israel," Netanyahu said in 2016, declaring his new diplomatic initiative with African nations as one of his top priorities.

In 2013, during the 21st summit of the AU in Ethiopia, the AU granted Palestine observer status, voicing support for the Palestinian struggle to establish their independent, viable state with East Jerusalem as its capital. The organization also expressed concern over the Israeli occupation of Palestinian land and other Arab territories that violates international law.

Since 2013, Palestinian leader Mahmoud Abbas has been addressing the union, a move Israel sees as a disadvantage since it needs the support of the giant bloc of African countries to push through its expansion agenda into Palestinian territories.

As the Palestinian struggle for freedom and human rights captures international attention, more and more countries have declared their stance on the Israeli occupation and most African countries including Ethiopia, Tanzania and South Africa have never shied away from stating their position.

Africa has already faced a dark history involving slave trade, colonialism, apartheid and genocide and would, therefore, not want a repeat of Israel’s version of apartheid on Palestinians. African countries had been further discouraged from allowing Israel into the AU due to the latter’s harsh and discriminatory treatment of economic migrants and refugees, particularly from Sudan and Eritrea.

In effect, most African countries had been wondering how Israel would be able to make its supposed significant contributions to the continent while it continues to be unwelcoming to people from the continent.

Joining the African Union is a diplomatic goal Israel had been working on to win support at the global level hoping that African countries will not vote against it in international forums.

Besides, Israel seeks to exploit the economic potential of the continent, seizing opportunities in the technology market, arms trade, specialized security technologies, mining, energy, infrastructure and others.

On the other hand, the East African coast and the Nile Basin remain a strategic and vital area that pushes its policies toward Africa forward.

Israel seeks, by all means, to dispel its image as an apartheid racist occupying power and it believes acceptance by third world countries will change its image.

Had it not been for the decline in the Arab role and interest in the main issues of concern to the continent, besides the normalization of some Arab states with Israel, it would have been impossible for Israel to penetrate Africa. If the efforts of Algeria, South Africa and other African countries fail, Israel’s accession to the AU as an observer will represent a righteous victory above all, in addition to some privileges, including access to official channels to influence issues that concern its interests especially to undermine African sympathy with the Palestinian cause, which will reflect not only on Palestinians but on the entire Arab region.

For decades, African countries have strongly supported the Palestinian liberation struggle against Israel, seeing in it parallels with their own anti-colonial movements and on every occasion, it calls for a just and lasting solution to the conflict within the framework of the relevant United Nations pronouncements.

Today, as Israel rejoins the AU, the continental body must be willing to step up its efforts to stand up for Palestine and must declare its stance publicly.