What is behind Somalia’s 2021 electoral impasse? 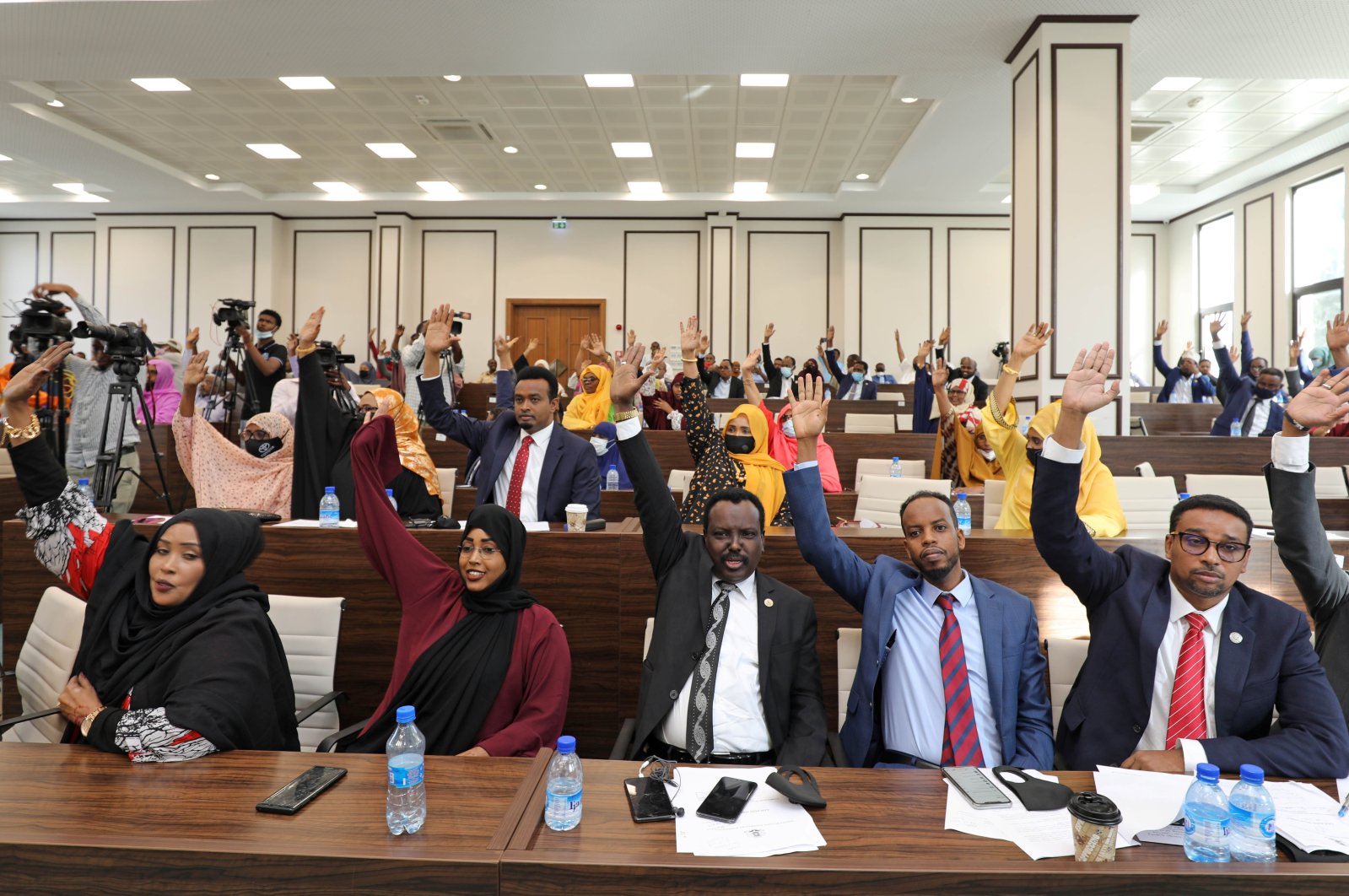 Somali legislators of the lower house of parliament raise their hands to vote to extend President Mohamed Abdullahi Mohamed's term for another two years to let the country prepare for direct elections, in Mogadishu, Somalia, April 12, 2021. (Reuters Photo)
by Abdirashid Diriye Kalmoy Apr 15, 2021 12:05 am
RECOMMENDED

Somalia, a country that is facing unprecedented security challenges, has entered uncharted waters. On April 12, the Somali parliament voted to extend its mandate and that of President Mohamed Abdullahi Mohamed, also known as Farmajo, for two more years.

This has increased political tensions in the country, which were already simmering since Feb. 8 – when both parliamentary and presidential elections could not be held due to political disagreements between the Federal Government of Somalia (FGS) and its constituent Federal Member States (FMS).

The political talks and negotiations between the FGS and the FMS that have been dragging on for the last two months in the capital Mogadishu have collapsed and the current government and parliament extended their mandate for two years, occasioning both a political and constitutional crisis with unforeseeable repercussions and consequences.

Somalia is at a critical junction in its nation-building efforts amid increasing al-Shabab terrorist attacks and political elites fragmentation. What is at the foundation of Somalia’s 2021 electoral crisis? What are the stakes and contentions involved that have led to the collapse of electoral talks?

Two visions for the state

Although the electoral crisis has a political facade, the foundation of this political impasse is two contending visions for the Somali state. Ever since Farmajo was elected in 2017, he had been at loggerhead with Puntland, Somalia’s most vocal federal state.

Puntland and Farmajo have two different and conflicting visions of how federalism should and ought to operate in Somalia.

The federal system of governance was imposed in Somalia through the political calculations of then Ethiopia’s ruling Tigray People's Liberation Front (TPLF) and this played conveniently into the hands of political elites in the Garowe province.

Puntland envisions a federal system where the federal states have their own military and even hold their own elections with no oversight from the central federal government. Nevertheless, this confederacy model disguised as federalism has hit a wall since Farmajo’s elections.

Given Somalia’s experience of a clan-based civil war and now coupled with the TPLF-orchestrated, clan-based federal structure, the emergence of a Somali state will be a big challenge to whoever occupies Villa Somalia, the presidential palace in Mogadishu.

This year marks the 30th anniversary of the Somali civil war. However, it could also be the commencement of a new phase in Somalia’s protracted political instability: center-periphery power struggles.

While the central government in Mogadishu has the political right and sovereignty to exert its powers all over the country, as all modern states do, it lacks the capacity and means to do so. Farmajo is probably envious of Ethiopia’s Premier Abiy Ahmed's political blow to the TPLF.

Federal insubordination and a weak state are at the foundation of the current political foundering. Puntland and the federal government relations are at their lowest point. Puntland has its own political and military concerns: confronting Somaliland militarily in the Sool, Sanaag and Cayn regions and the new Daesh threats.

Moreover, many observers of Somali politics prophesized that violence would engulf the country if elections are not held on Feb. 8. However, this flew back in their faces.

No amount of clan dog whistling and mobilization from many prominent Somali politicians could result in violence and an insurrection. The Somali people, already exhausted by the al-Shabab terror and the COVID-19 threats, were indifferent to the political elites bickering even as they resorted to clan sentimentalism and cries of political grievances.

At the subconscious level, every Somali, the youths primarily, understand that petty clan politics led to the civil war and robbed them of their futures. The doom prophesized never materialized. The masses yearn for political stability, rooting out the al-Shabab terrorism and a functioning governance model.

Nevertheless, Farmajo’s insistence to consolidate the federal system under Mogadishu’s rule is not appreciated in Garowe and he has to face this reality.

Constructive talks, compromises and guarantees on Puntland’s concerns are the best way forward to resolve the recurrent and incessant Mogadishu-Garowe tussle.

Furthermore, a democratic election based on universal suffrage is the other solution to Somalia’s dysfunctional federal system.

The federal system, which ought to usher in an era where governance and administration are decentralized in Somalia, has been misunderstood by different elite groups as sharing political sovereignty with the central government in Mogadishu.

Hastening the constitutional amendment process, which has stagnated for the last four years, and putting federalism into a referendum would also lessen future political contestations.

Somalia is at a critical junction politically and constitutionally. The Somali parliament handed Farmajo two more years. These two years will define the future of the Somali state.

There are three possible scenarios in these two years:

However, if the current administration capitalizes on these two years to hold elections and build broad-based political consensus for its agendas, Somalia could transition to peace, a functioning federal system and political stability.