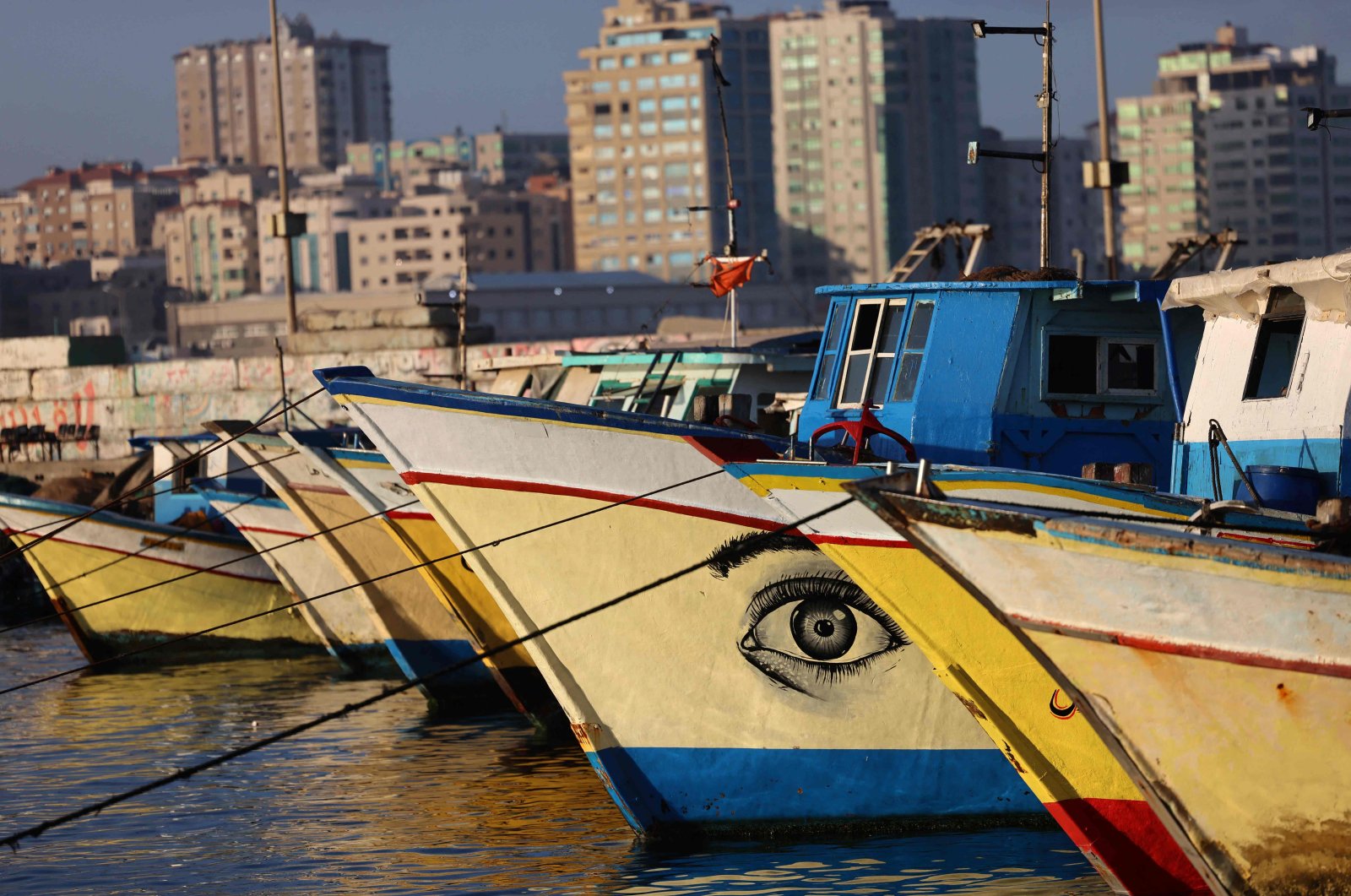 Palestinian boats remain moored at Gaza City's main fishing port as Israeli security forces allow only a limited number of vessels to return to sea following a cease-fire in the recent conflict, Gaza City, Gaza Strip, Palestine, May 24, 2021. (AFP Photo)
by DAILY SABAH May 25, 2021 11:57 am
RECOMMENDED

Bilateral talks for maritime demarcation between Turkey and Palestine in the Eastern Mediterranean will bear positive outcomes, Hamas chief Ismail Haniyeh stated on Monday, underlining that “any step the Palestinian state will take together with Turkey, will be to the advantage of both countries.”

Speaking during an interview with Habertürk news channel, Haniyeh said: “Turkey’s rights in the Eastern Mediterranean can of course not be opened to discussion. All policies prioritizing Turkey’s own interests and security are its right. At the same time, when we consider that the Palestinian state is also a country with a shore on the Eastern Mediterranean, it has the same rights.”

Haniyeh stated they considered Turkey, Egypt, Iran and Saudi Arabia important countries in the region, adding that Turkey's rapprochement with said countries would affect the Islamic world and the Palestinian cause positively.

He added that demarcating maritime borders with the approval of regional countries would be appropriate.

He noted that almost all countries in the Mediterranean region would not oppose it and it would significantly strengthen Palestine’s hand as Israel continues its indiscriminate attacks targeting civilians and civilian infrastructure.

Gaza has been under a land, sea and air blockade by Israel, while the Palestinian Naval Police's activities are restricted to 11 kilometers (6.84 miles) from the coast.

“By signing such an agreement, the Palestinian people would obtain control over a 10,200 square kilometer (approx 4,000 square miles) maritime zone, which would pave the way for them to utilize all the resources at sea,” Yaycı said.

He continued by noting that the deal would also allow Turkey to expand its maritime jurisdiction zone in the Mediterranean, spoiling Greece and the Greek Cypriot administration’s plans in the area.

The Eastern Mediterranean basin is estimated to contain natural gas worth $700 billion (TL 5.9 trillion), according to the U.S. Geological Survey.

In response, Egypt and Greece signed an agreement in August 2020, designating an exclusive economic zone (EEZ) in the Eastern Mediterranean between the two countries, which Turkey called "null and void."

Meanwhile, Israel may categorically oppose the deal claiming that Palestine is not an independent state, but in reality, it would benefit from such a deal because Tel Aviv may also regain control over 16,400 square kilometers of area “stolen” by the Greek Cypriots.

On Palestinian President Mahmoud Abbas' decision to postpone the May 22 elections, Haniyeh said they want the elections to be held as soon as possible, stating such a move would end internal disputes in Palestine.

He stressed even if Hamas wins the elections they will create a joint government.

Ruling out any aims to dominate Palestine politically, he said they want to first and foremost liberate the occupied lands.

Touching upon the normalizing of relations with Israel by some Arab countries, he said such moves legitimize the Israeli occupation.

The interview comes just as Israeli attacks on Palestinians, the fiercest in years, came to a halt on Friday under an Egyptian-brokered cease-fire.

Tensions escalated across the Palestinian territories last month over an Israeli court verdict to evict Palestinian families from their homes in the Sheikh Jarrah neighborhood of East Jerusalem in favor of settlement groups. The situation worsened after Israeli forces raided the Al-Aqsa Mosque and assaulted worshippers inside.

The confrontation spread to the Gaza Strip, with Israel launching airstrikes that killed at least 248 Palestinians, including 66 children and 39 women, and injured more than 1,900 others. Health authorities in the West Bank also confirmed 31 killed in the occupied region, totaling 279 across all Palestinian territories.

At least 2,000 buildings were completely destroyed and 15,000 buildings became unusable in the Israeli attacks on the enclave, according to the Gaza-based Palestinian Ministry of Labor and Housing.

Some four mosques and dozens of police stations were completely destroyed in the attacks, while many factories in the industrial zone became unusable.