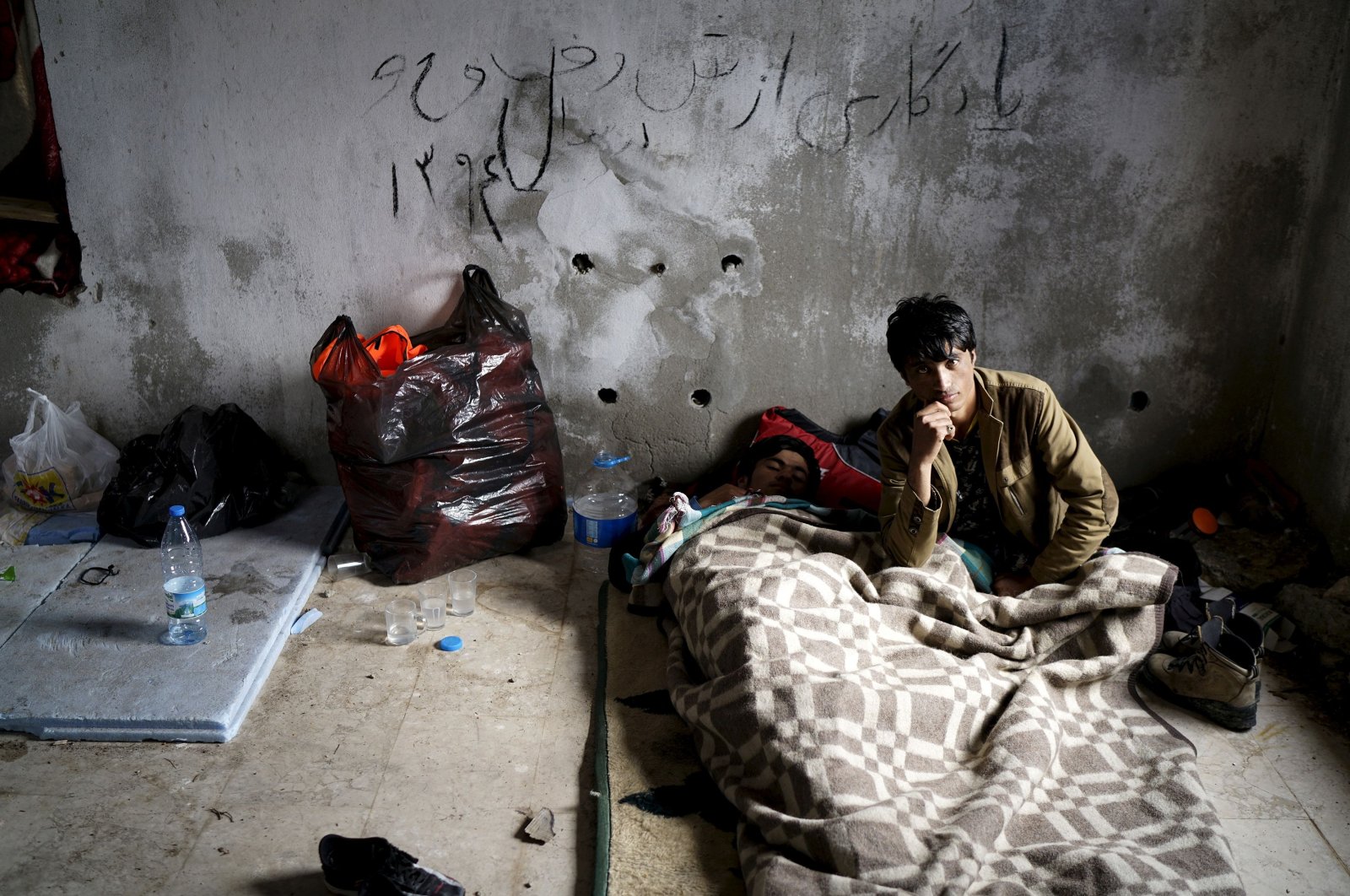 Afghan refugees rest in an old abandoned beach house as they wait to board a dinghy sailing off for the Greek island of Chios, while they try to travel from the western Turkish coastal town of Çeşme, in Izmir province, Turkey, March 6, 2016. REUTERS/Umit Bektas/File Photo
by DAILY SABAH WITH AA Aug 08, 2021 12:47 pm
RECOMMENDED

Some of the irregular migrants who have recently entered Turkey illegally, mostly Afghans, claim that the security forces that detained them in Iran tortured them and took their money.

Hayatullah Ahmedzai, 19, an Afghan national and one of the irregular migrants who came to the Tatvan district of Turkey's eastern Bitlis province illegally, told Anadolu Agency (AA) that he has been on the road for 25 days.

Stating that he faced great difficulties after crossing the Iranian border, Ahmedzai showed wounds on his foot and leg and claimed that the Iranian police inflicted violence on him and broke his foot.

Expressing that they were stuck in a barn for five days as soon as they crossed the border, Ahmedzai said: "There was no water or food. We had a difficult time. We couldn't find any food on the way for five days."

Ahmedzai made the following claims: "When the Iranian police caught me, they beat me to death. They took our mobile phones and money. The area where I live is under the control of Taliban militants. My father is a commander in the Afghan National Army. One of my brothers, who was in the army, was also martyred by the Taliban. I fled because I faced a very difficult situation.

"The Iranian police were brutal. We could only eat yogurt and bread while we were detained there. They didn't provide beds, they put me in the barn. My two uncles live in London. They sent me money to get to London. I've come this far, if I'm successful, I'll go to London," he said.

Afghan Sefer Murad stated that he has been on the road for 30 days and said: "We first came to Pakistan and then to Iran. Now we are here. We have no bread. We have been in the mountains for 25-30 days. Six people set out from Afghanistan with me. Soldiers took five of them.

"I came here alone. We came here with a group of 30 people from Van. Nobody is hiring in Iran, but we came from there illegally from the mountain. I gave $600 to those who helped us come here," he said.

Ghulam Nabi said that he and other Afghans fled their country due to the widespread presence of the Taliban in different regions and the ongoing war in different parts of the country.

Stating that they went through difficult roads and starved for days until they came to Turkey, Nabi said: "We could no longer live in our country. Violent clashes began between the Taliban and the security forces. If stability is achieved in Afghanistan, we will return to our country. We traveled for 30 days until we got here. We faced hunger. Iranian police caught us and released us after beating us brutally."

Khal Mohammed, who came to Tatvan with his 9-month-old baby and his wife, said that the war in Afghanistan was still going on and that he had sold everything and fled with his family because there was no place to work.

Stating that his father and relatives were captured by the Taliban, his brothers and uncles were also killed, Mohammed said: "We came to Van from Iran. We set out about 20 days before the feast. I sold everything, I came with my wife and child. I sold our lands, cows and sheep in Afghanistan. I gave $2,000 to intermediaries for myself and my wife."

Explaining that he stayed in Iran for 10 days, Mohammed said, "They broke our phones and burned our money. Iranian police beat us all ... If we have money, we buy food, otherwise, we ask for food from the villagers in the places we pass by."

Mehmet Marufi, an Afghan national who was caught by the gendarmerie in Van, stated that they had to flee due to the problems in their country, and said: "We came to Iran from our country. Iranian soldiers persecuted us a lot. They sent us by force so that we could go to Turkey. We are moving on the roads with the locations that were sent from WhatsApp."

Explaining that he escaped from Afghanistan and took refuge in Iran and worked there, Selim Sırdaş said: "Iranian soldiers caught us, took our money, our stamps, everything. They deported us from there to Turkey. Iranian soldiers transferred us to Turkey."

"After the crossing of Turkey, smugglers put us on a truck with 300 people. We were dying because of the lack of air in the truck. Thanks to the gendarmerie, they caught us and saved us. They charge us up to $1,000 to cross into Turkey," he added.

Turkey and Iran are the countries most affected by the migration problem caused by increasing tensions resulting from the advance of the Taliban in Afghanistan, Turkey's Parliament Speaker Mustafa Şentop stated on Thursday.

Turkey, which hosts around 4 million refugees, is currently building new security measures on its eastern border. Afghans are believed to be the second-largest refugee community in the country after Syrians.

The Taliban has pressed a sweeping offensive across Afghanistan in recent months, capitalizing on the last stages of the U.S. troop withdrawal due to be completed by the end of August, and raising fears of a potential humanitarian crisis.

The United Nations recently estimated that half of Afghanistan's 39 million people are in need of aid, and called on the international community to maintain financial support for the country.

Turkish Defence Minister Hulusi Akar said last week that surveillance at the Iranian border had been increased with additional troops, among other measures.

Turkey is also erecting a wall along parts of the 300-kilometer (186-mile) border.